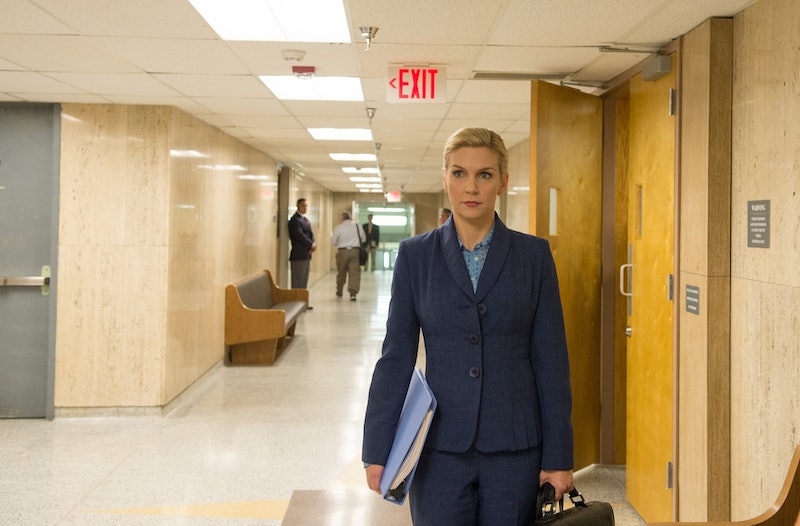 Have we found our new "Slippin' Jimmy"? The not-so-affectionate nickname given to the hero of AMC's Better Call Saul refers to his days as a young con man, who would make tidy sums of money by pretending to slip on ice on the sidewalk outside of an establishment and then suing them. Although he doesn't pull that particular con anymore, he has never entirely left his old unethical ways behind, either. In fact, in the BCS Season 2 premiere, we saw Jimmy induct his crush Kim Wexler in the rules of the game, conning a wealthy businessman into buying them an expensive dinner — including an entire bottle of top shelf liquor. But now Kim has pulled another con… raising the question of whether this upright lawyer will follow Jimmy on his downward spiral.

This latest con came in the midst of a difficult time for Kim with her job at Hamlin, Hamlin & McGill. Despite Chuck stepping in and getting her off of doc review and out of the basement (where she had been stuck for her part in Jimmy's ill-advised stunt with the commercial) Howard Hamlin was still furious with his once-promising protégée, giving her the cold shoulder, not showing up for court dates, making her skip lunches, and just generally not making her feel valued as an employee. So when Mr. Schweikart, head partner of HHM's competition in the Sandpiper case, approached her with a job offer — complete with repayment of student loans and automatic partner track — she seriously considered it.

But stuck between continuing at a job that didn't appreciate her talents and betraying the firm that gave her her first shot at a real career, Kim temporarily chose a third option: distract herself by resurrecting her alter ego, Giselle St. Clair, the name she coined in her first con with Jimmy. Her mark this time was an unsuspecting schmuck who hit on her at the bar only moments after Kim personally witnessed him kissing his significant other goodbye. She called Jimmy and together they wined and dined the poor guy and regaled him with stories about their (fake) dotcom startup, and walked away with a $10,000 check made out to Ice Station Zebra Associates — which is both a reference to a 1968 Rock Hudson movie and also the name of the holding company Saul Goodman uses in Breaking Bad for purposes of tax evasion.

Of course, Kim doesn't intend to actually cash the check; she merely wants to hold onto it as a trophy and ends up sticking it on her mirror as a reminder of the successful con she and Jimmy pulled together. But as thrilling as it is to see the two unexpectedly sweet lovers bond over such a morally dubious hobby, it's also worrisome for Kim's character. The difference between this con and the first is that the first one was Jimmy's idea, which Kim entered into hesitantly. This time it was all Kim's idea… and she's proving to actually be really good at conning people.

"What happens to Kim?" is a question that constantly lingers over the events of BCS, considering that she's nowhere to be seen during the course of BB. Somehow Kim winds up gone from Jimmy's life completely, but whether she dies or they simply have a huge falling out — or whether she goes to prison for some sort of fraud? — is still a mystery. But if she keeps finding herself drawn to a life of petty crime, we may soon have to start referring to the character as "Slippin' Kim."