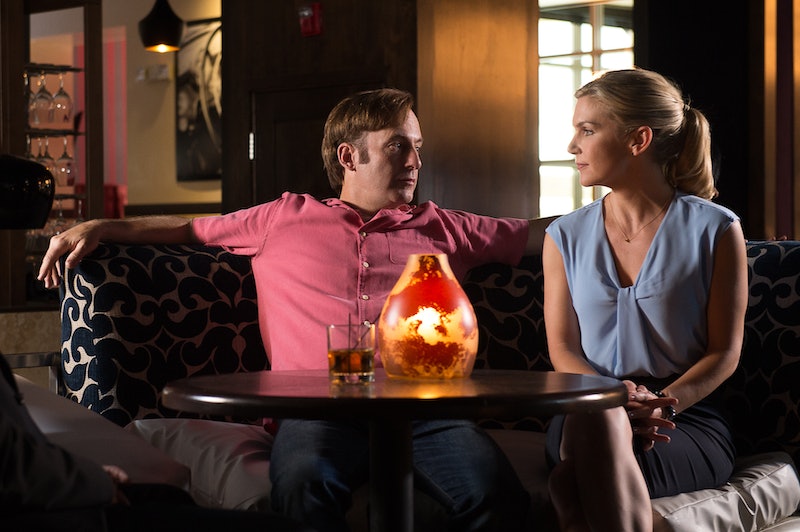 Throughout the first season of AMC's Better Call Saul , by far the most important person in Jimmy McGill's life was his brother Chuck. But after that devastating betrayal in Season 1's penultimate episode, when Chuck told his younger brother how he really felt about him, big brother has fallen pretty far down that list. In fact, we don't even see Chuck in the second season premiere of the Breaking Bad spinoff. And taking over Chuck's place as the most important person in Jimmy's life is undoubtedly Kim, his friend and fellow lawyer who Jimmy kissed for the first time last season after he learned he'd passed the bar exam. But being Jimmy's favorite person is a risky proposition — you might just find yourself unexpected pulled into participating in a con, like Kim did in the Season 2 premiere, "Switch."

The episode picks up right where Season 1 left off, with Jimmy turning down the offer to become a partner at Davis & Main. Instead, he quits lawyering entirely and starts spending his days lazing around the pool drinking cocktails. When Kim stops by to berate him and ask him what he plans to do with his life, he tells her that he'll simply wait for opportunity to arise. And arise it does, in the form of a slimy "wealth manager" named Ken.

Jimmy sees his mark and doesn't hesitate to strike, pulling Kim over to the bar and introducing himself to Ken as "Viktor with a K." Although hesitant, Kim is forced to participate and proves to be more than adept at lying, choosing the name "Giselle St. Clair" and inventing a backstory that involves South African heritage. By pretending they've just inherited a million dollars from a dead uncle, they are able to con Ken into buying them a luxurious dinner while he extolls the virtue of diversifying their assets. Kim (I mean, Giselle) doesn't even hesitate to order the Zafiro Añejo tequila — which comes at the hefty cost of $50 per shot. They polish off the entire bottle.

Leaving an outraged Ken with the check and tearing up the contract they signed with their fake names, Jimmy and Kim have a drunken night of passion. The next day, while getting ready for work, Kim expresses her wish that they could do something like that every day. Jimmy clearly thinks they could, and even goes back to the bar and takes aim at a new mark… before changing his mind and accepting the position at Davis & Main, recommitting himself to the law.

Did Jimmy abandon his life of con jobs and luxury just to impress Kim? Speaking of Kim, has she now been seduced by the con, or was that just a one-time deal for her? We already know that she never pops up during the course of Breaking Bad… does that bode ill for her ultimate fate? Luckily we've still got nine more episodes left this season to watch Jimmy McGill's downhill slide into the sleazy lawyer we all know and love, Saul Goodman.