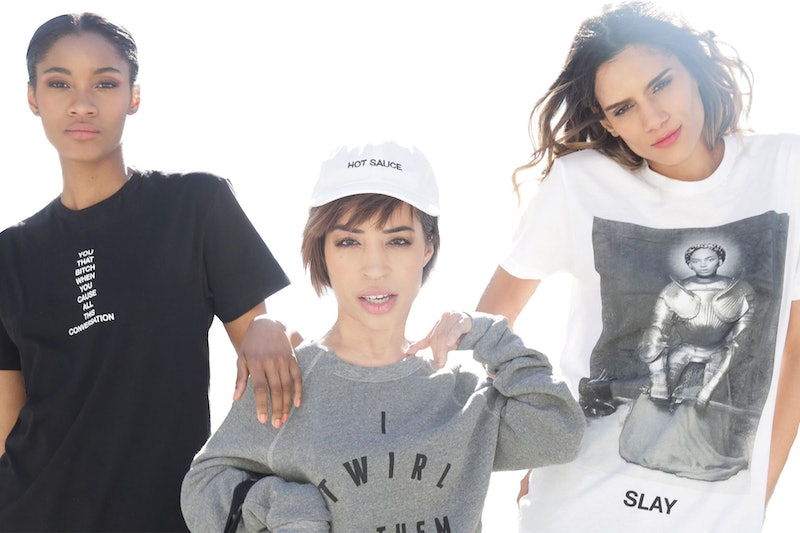 When it comes to feminism, Beyoncé doesn't just talk the talk, she walks the walk and walks it well. With the arrival of disabled model and activist Jillian Mercado's ad campaign for Beyoncé, hearts the world over filled with joy for the intersectionality and representation being achieved by this decision. Rather than market the ads as a win for visibility, however, Beyoncé placed Mercado in the images without any major announcement or fuss, nailing diverse inclusion in a way that felt genuine.

That said, we still should celebrate both Beyoncé's casting decision as well as Mercado's success in gaining such a huge campaign. By casting Mercado, Beyoncé is showing awareness for the fact that an entire subsection of people often get left out by both fashion and the media. In giving a voice and platform to someone differently abled, she's closing the gap just a little bit more.

As Glamour reported, Mercado has muscular dystrophy, a hereditary condition that weakens muscles gradually and leads to differing levels of disability. Since coming into the public eye as a model, she has used her platform and social media presence to fight against stigma towards the differently-abled to be a role model for women everywhere. She was undoubtedly the perfect choice for the campaign of everyone's favorite socially conscious celebrity. As Vogue noted, "Never content with the status quo, Beyoncé, with Mercado, is making a statement about the inclusion of models with disabilities."

Besides being a prominent activist, Mercado's modeling career has also been successful since well before this 2016 campaign. From working with the likes of Diesel to garnering her own strong fan following on social media, there's no doubt that she's unstoppable.

This campaign will hopefully only help bring Mercado and the activism that she stands for further into the forefront of not only the fashion world, but the consciousness of anyone who is a fan of Beyoncé (i.e. basically everyone).

While celebrating this step forward for fashion and representation, it's important to recognize all the hard work that Mercado has been putting into her modeling career for years. The work she has done before this campaign is impressive and exciting, giving us not only hope, but proof that her success isn't just a fluke. Here are some of Mercado's biggest, most badass campaigns.

Jillian Mercado's 2015 Diesel campaign marked the moment when Mercado hit the public eye in a really big way, infiltrating the feeds of anybody with an Instagram account. The IMG model made headlines the world over and looked stunning while repping the acclaimed brand.

2. The Face Of IMG Models

Not only is Mercado signed to IMG Models — the agency that represents the likes of Bella Hadid and Coco Rocha, to name a few — but in 2015, she was made the face of IMG Models as well.

Getting a spread in the CR Fashion Book is a landmark in any model's career, and Mercado's shoot was undoubtedly stunning.

Being in any issue of Vogue is likely an aspiration for people the world over, and Mercado killed it with her pink hair for Vogue Japan.

Although an edgier magazine, i-D is still an honor to get into. Mercado's personal quirky style tied in beautifully with the publication's out-there aesthetic.

Even if you only just heard of Mercado through the announcement of her merchandise campaign with Beyoncé, you can be sure that this won't be the last you see her name. Hopefully this is only the beginning for Mercado's show-stopping career and diverse representation for the differently abled in fashion, too.