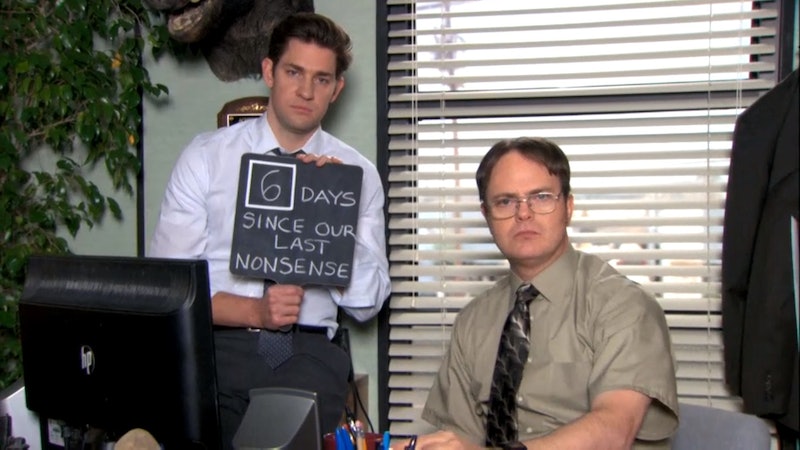 April Fools' Day is right around the corner — and surprise! It's on a Friday this year, which means you'll likely be looking for some solid April Fools' Day pranks to play in the office. That, or you'll be hiding in your cubicle, hoping that nobody decides to pull a prank on you first.

I'm in the latter group. While I appreciate harmless, well-thought-out pranks, I understand that most pranks on April Fools' Day are created by people who went into the office that day thinking it was a typical day. Thus, they'll be struggling to find something clever, and probably resort to the "there's a spider on your desk chair!" lie that'll bring you a moment of panic, as spiders are terrifying, and fear-based laughter is kind of cruel. You don't want to cause a heart attack — you'll never forgive yourself for that kind of result.

The best office pranks are harmless. They require a lot of thought, and a lack of a fear of getting fired. While it's tempting to take a joke too far (see: any joke that involves airhorns) your end-goal is laughter. You can be the person that helps people look forward to the holiday, instead of the person who people try to avoid, or contemplate taking a personal day over when the holiday hits.

Here are nine harmless pranks that you can pull on your office that'll guarantee good spirits all around.

1. Change your coworker's desktop image to a goofy picture of you

If your coworkers don't have password protection on their computers, this harmless prank might give them a laugh. Take a goofy photo of you, and make sure your face is the first they see on April 1. Note that while this is harmless, it's probably not the greatest idea to pull it on a coworker who has company-sensitive material on their computers — so, avoid HR and the accounting department.

2. The stapler in Jell-O trick

We saw it play out on The Office, and it's a fun prank, especially if your office contains fans of the show. You're going to need a lot of Jell-O for this, and the process is done in two parts. You'll want to make half of your Jell-O in a bowl, refrigerate it for about two hours, place the object inside, and prepare the rest of the jello on top. Any item can be suspended in Jell-O, but staplers work best, as you likely won't render the object useless. It'll just require a little bit of clean-up.

3. Fill up the meeting room with balloons

Do you have plenty of air in your lungs? Then you'll be able to pull off the multi-balloon office prank. If your boss isn't scheduled for an important meeting that morning, it'll be a fun way to add a little color and joy to your office place. This prank is best pulled with a like-minded coworker or two, depending on the size of the space you're looking to fill up. Show up early to fill up balloons while at the office, or find an easy way to transport them from home.

4. Fill up a box of doughnuts with veggies

People light up when they see a box of fresh doughnuts. Their emotions fall when they realize that what's inside the box isn't what they originally thought. Back in the day, one of my coworkers got really psyched to see a fresh looking white box that looked like it came straight from the bakery, but was bummed to realize that they only contained manila folders. (Guess I shouldn't have stored them on the snack table.) By filling up a Krispy Kreme box with veggies, you'll still be offering your coworkers a snack — it's just not as exciting.

If your desks are all in close quarters, it'll be easy to switch things around a bit and see when people notice. They'll make a beeline to where they assume their desk is, but wait a minute — that's not their hand sanitizer, or box of paperclips. This will work especially well if there aren't too many cords around. Disconnecting and reconnecting phones is more of a punishment than a reward.

If you've ever worked in customer service, you know that people can often be ridiculous. Create a character that's laughably terrible, and try your hardest to get your fellow coworkers to break. If it's someone that truly tests their patience, offer to take them out to lunch to make up for the frustration. Your character should be awkward, strange, and memorable.

If your office is like most, you have a community coffee pot and an area to enjoy some caffeine before starting your stressful work day. You might also have a few community cups in rotation that people depend on. This one's simple. Remove the mugs to where they're normally stored, and consider decorating someone's desk with them. If you can find someone who's absent or out of town that day, that'd be the best space to use.

Printer problems are the worst. To quote Office Space, "PC Load Letter, what the F does that mean?" Consider removing a majority of the paper, to get more attention to the printer, and put up a (professional-looking, as your handwriting will be a dead giveaway) sign that says "Voice Activated." See how many people yell at the printer. Even if nobody falls for it (and if you have a younger office, this might be the case), it's at least kind of cute.

Do you have any coworkers that check the paper in the morning? Or, are free papers available in the break room? Keep a stock of much older papers on hand, and replace a few sections with old news. If it's weeks old, it's even better. See if anyone in the office notices. News and sports are the best segments to swap out.