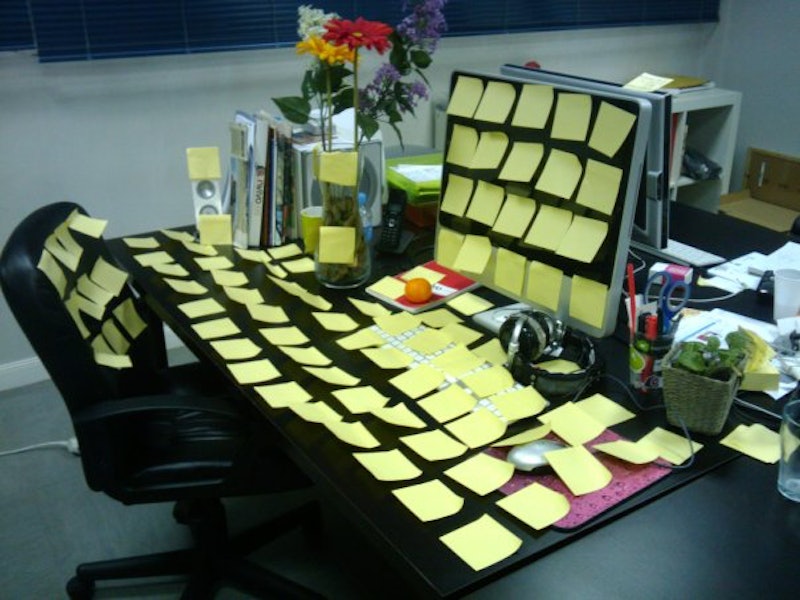 There's a little mantra I like to live by on this wild and crazy day of plotting, ploys, and pranks: It's all fun and games until someone gets hurt. Yes, it's fun to put your friends, family members, and coworkers in uncomfortable situations that they may or may not forgive you for later, but please remember that harmless April Fools' Day pranks are the best April Fools' Day pranks. Witty though you may be, making other human beings cry isn't very becoming, and while it's one thing to pull something that shows off your wickedly funny sense of humor, it's another thing altogether to be, well, just plain wicked.

PSYCH APRIL FOOLS! This day is the best BECAUSE you can play hilarious tricks on people without feeling a single ounce of guilt. This is the one day out of the whole year where you can play out those revenge fantasies you've been dreaming up for the last 364 days, and as long as you're going to pull a prank, you might as well do it in a big way, am I right? No half ass jobs here... let your inner evil genius fly free.

Still, let's try to get through today without any tears, OK? Here are 11 totally hilarious, completely harmless tricks to play on basically everyone you know.

So you're sitting there, and you're nomming on what looks like a few delicious fries, and you very generously offer to share some with your coworker who brought nothing but a pathetic carton of yogurt for lunch... except JOKE IS ON THEM, because these bad boys are actually strips of French bread, and while that's totally cool under certain circumstances, it's a huge letdown when you're expecting crispy, greasy fries. Seriously, I would be so pissed. (Taste and Tell shows you how to do this flawlessly.)

2. Tell everyone Starbucks has decided to add the Birthday Cake Frappuccino to its permanent menu

Try not to laugh at the look of devastation that befalls your best friend's face as the barista explains to her she has it so, so wrong.

3. Add googly eyes to EVERYTHING

I'm just going to let this hilarious photo speak for itself.

4. Convince your significant other that they have the wrong number

Although to be honest, I've tried to play this on an ex-boyfriend multiple times and it's never actually worked.

5. Or just let your cat answer the phone every time someone tries to call you

Whenever the phone rings, immediately hold the receiver up to your cat. No one will really know what's going on, and it will be purrr-fect (not sorry).

Nothing like serving up a donut FULL OF MAYONNAISE HAHAHAHA. But ONLY do this if you're cool with people hating you forever.

7. Round up photos of you and your significant other, and then replace their face with pictures of Nicolas Cage

The funny part here will be waiting to see how long they actually notice... I mean, it could take days.

8. Deliver your frenemy a box of Krisy Kreme donuts

Except just kidding, that's actually a box full of BROCCOLI.

9. Text the person you're dating, "I haven't been totally honest with you..."

... and then don't say anything for an hour. Watch as panic ensues as they try to figure out what you're talking about.

10. Ask everyone what they think of your new haircut

Don't mention the fact that you haven't actually gotten a haircut.