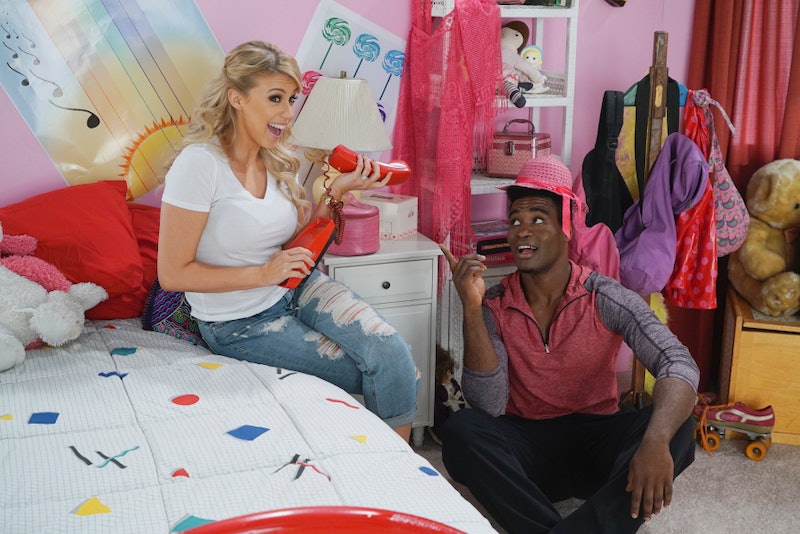 By now, most of you have probably marathoned your way through the Netflix revival of Fuller House, but just in case your '90s nostalgia has yet to reach maximum capacity, fans will get the chance to see Full House star Jodie Sweetin make her Dancing With the Stars debut during Monday evening's premiere of Season 22. And if you're wondering whether or not Sweetin will be channeling Stephanie Tanner's Full House dance moves to help win the judges (and the voters) over, I think the image above pretty much speaks for itself. Of course, she's going to use that iconic character to her advantage! And why shouldn't she? Aside from her lovable catchphrase "How rude!," this middle child of the Tanner clan was first and foremost known for her incredible dancing talents, which deserve to be harnessed during a reality competition like this.

But the beauty here is that, thanks to Steph's broad range of dancing abilities that we've witnessed throughout her Full House reign, the actress has quite a variety of dance moves to choose from, including tap and Broadway bound performances. So if Sweetin wants to give herself a real shot at winning that coveted Mirrorball Trophy, she needs to fully embrace her Stephanie Tanner persona and bring these memorable dance moments back to life.

It's enough to give the judges some really "Good Vibrations."

Can you imagine if they were able to get the entire cast together to join her in this fantastic number? If that isn't enough to rake in the votes, then I don't know what is.

Just in case you had any doubt of Sweetin's natural talents, this dance sequence went on for well over a minute and Steph managed to flawlessly dominate the spotlight the entire time. If she could do all this as a kid, just imagine how she could pull this off with a few more years of training under her belt.

She had the crowd eating out of the palm of her hand. Why should that be any different now?

At the 4:27 mark you'll find Steph giving Michelle some pretty great tap lessons. Something tells me Sweetin would be able to put her best foot forward if she was required to bust out these top-notch moves.

The songs may be different from the '90s, but this lady's talent remains just as prominent as ever.

OK, so it wasn't exactly freestyle, but we were supposed to think that Steph had just busted some serious moves with a complete stranger in the fitting form of DWTS pro Val Chmerkovskiy — perhaps a foreshadowing of what was to come? If she puts even half as much passion and energy into her upcoming routines, that Mirrorball Trophy is basically hers for the taking.