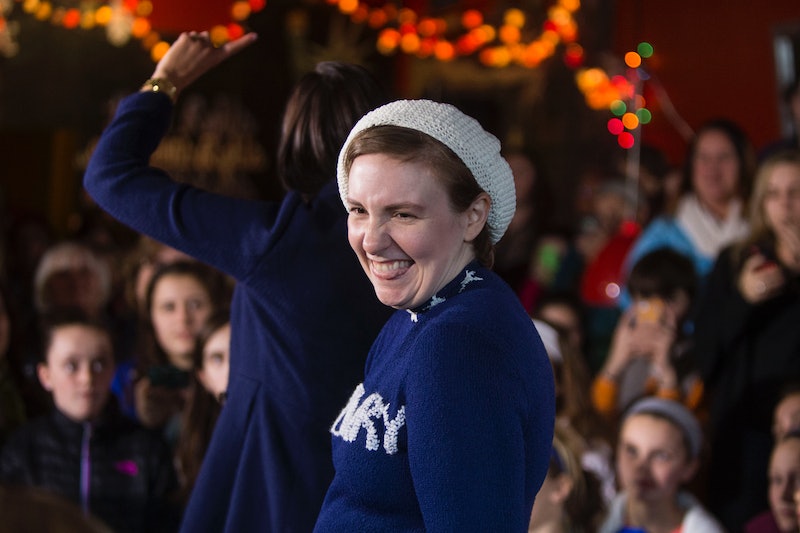 The Girls creator/star/producer has famously campaigned for presidential candidate Hillary Clinton for the coming election — and it shows in her fashion choices. Now she's upped the ante with some rad denim. So, where can you buy Lena Dunham's Hillary Clinton jacket?

Well, unfortunately for us, it was specially customized by Lena's stylist, Shirley Kurata — so it's not exactly something you'll be able to pick up at your favorite department store. The flipside of that, though? It's actually not too hard to DIY yourself — all you need is a denim jacket, some patriotic-themed voting patches, one GIANT Hillary patch, and, of course, some of Lena's signature kooky fashion panache, and you're good to go.

Lena wore the jacket at a non-fundraising event for the campaign, where she spoke out about the backlash she's received for supporting Hillary, saying quite cogently, "I have received more hostility for voting for a qualified female candidate than I have ever received anywhere from the American right wing ... The fact that other members of the Democratic Party have spoken to me like I was an ill informed child for voting for someone who represents everything I think this country should be is outrageous."

So, ready to cop the style for yourself? It's perfect for spring, not to mention election season. And hey — it's a fun way to declare your allegiances and make a literal fashion statement. Here's all you need to get the look — starting with the giant Hillary patch, of course.

It's actually pretty easy to customize your own letterman jacket-style chenille patches online — an online store like NeffCo allows you to customize the name, colors, and size of your patch (if you want to make as big a statement as Lena, I'd recommend the 3 or 4-inch variety).

You can either pick out your patches by hand, or you can purchase a pre-chosen variety pack like the one pictured above.

Go for a shorter length with a stone or mid wash to most closely mimic Lena's look. That said, the jacket itself isn't the focal point of this look, so just choose whichever style suits you best!

So, will you be copying Lena's jacket in time for election season this year? If so, add the accompanying Hillary-printed knee socks and pro-Hillary cheer routine for best results.