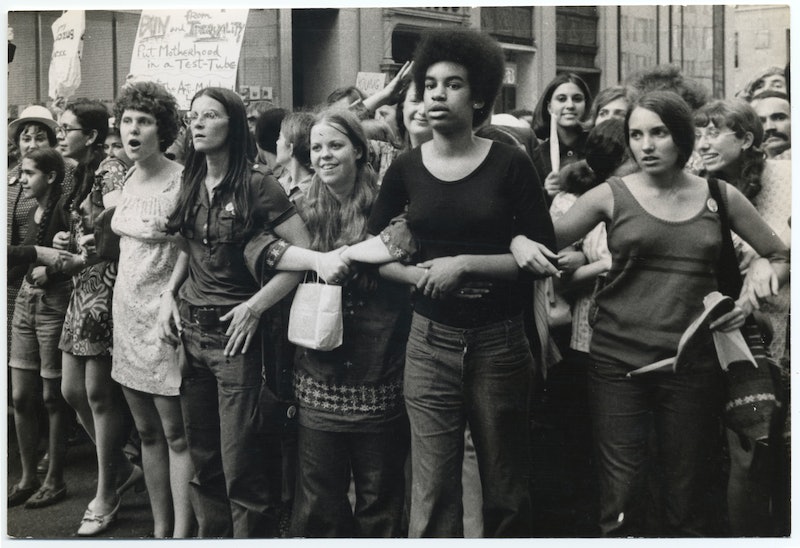 "If women get March, then why isn't there a Men's History Month?" says some clueless internet comment somewhere. And the answer to that reductive question is simple: every month is Men's History Month — especially if you attend or have attended public elementary, middle, and high school. I'm a self-proclaimed feminist because I support my own rights, and because it's 2016, where gender equality is no longer optional. I have a running New Year's resolution to seek out more feminist theory and history texts, since the movement is still regarded as a niche subject instead of a social justice revolution with far-reaching implications for men and women. Yet while that personal goal still stands, a documentary has fortunately been released that serves as the most empowering set of Cliffs Notes ever on a specific era of women's liberation. She's Beautiful When She's Angry is the one film you have to watch this Women's History Month.

Partially funded by Kickstarter, this documentary, available now, was more than 20 years in the making. In her Director's Notes for the movie, filmmaker Mary Dore recalled applying for grants to develop She's Beautiful When She's Angry in the '90s, without much success. "There have been very few films on the women’s movement, and none with the scope of a feature documentary intent on reaching a wide theatrical audience," Dore wrote about her passion for the underrepresented subject. "For reasons both complex and very simple, the women’s movement, arguably the biggest revolution of the 20th century, has been disparaged and ignored." The director chose to set the focus of the movie on the years 1966-1971, though I can only hope that she or another documentarian will pick up the baton and follow the feminist movement into the '70s and beyond.

I watched this film at a screening with an audience of about 125 or 150 people, mostly other women. When the lights came up for the post-screening panel discussion, I wasn't the only viewer wiping my eyes with a napkin I'd found shoved in the bottom of my handbag. She's Beautiful When She's Angry is alternately invigorating, sobering, and appalling. Told primarily through interviews with the women who'd been on the frontlines and breathtaking archival footage and photos, the movie provides several familiar points of reference for feminists here in 2016. Watching liberal male protesters en masse threaten and mock female speakers at '60s anti-war rallies reminded me of modern-day "allies" who prefer to speak for the women they claim to support. And the movement's struggle with hearing and understanding the specific needs of women as they vary by class, sexuality, and race are sadly reminiscent of modern feminism's ongoing struggle with intersectionality and representation.

But there are many moments of triumph captured by this movie that renewed my commitment to staying vocal and learning more. Take the reunited authors of the independently published 1971 book on women's health and sexuality by women, Our Bodies, Ourselves. She's Beautiful When She's Angry follows the collective to a celebration of the book's reprinting, which leaders from many of the countries who distribute translated versions attended to thank the writers for providing powerful information to under-resourced women around the world. The documentary is a testament to the power of grassroots organization and to simply not waiting to be invited to the table.

I think my 11th grade American History textbook covered women's liberation with a three-sentence paragraph on the most mainstream organization there was: N.O.W., the National Organization For Women. There was nothing to be found in that text about the "Lavender Menace," a group of lesbian feminists who protested against being ignored within the movement; the Women's International Terrorist Conspiracy from Hell (W.I.T.C.H., for short), who dressed in robes and played on stereotypes to draw attention to the cause; or the Jane Collective, an underground abortion service that assisted over 11,000 women in the safe termination of unwanted pregnancies before Roe v. Wade legalized the procedure.

How can you see the film? The official website for She's Beautiful When She's Angry lists upcoming screenings and provides links to stream, download, or purchase a DVD copy of the film. My suggestion: do not watch this movie alone, if you can help it. This documentary proves how impactful conversation and shared experience can be on culture and even policy. So call on the women and men in your life to view this film and to learn a little more about the feminist history they don't teach in school.