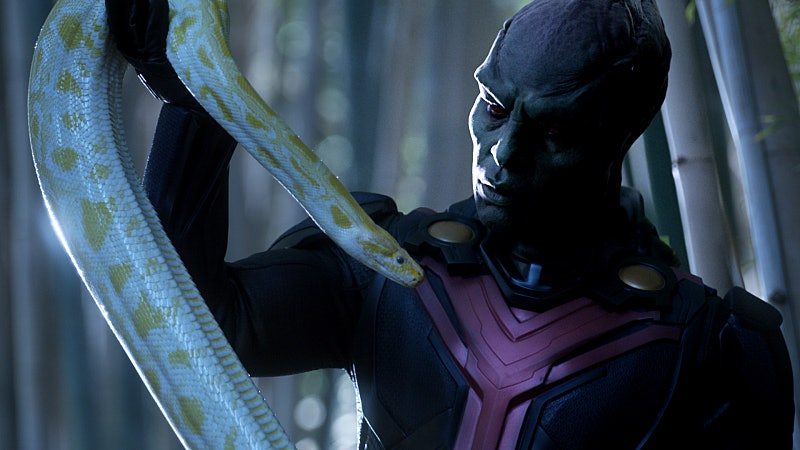 Supergirl hasn't pulled any punches in Season 1 when it comes to big, shocking moments — though nothing can hold a candle to the reveal that Hank Henshaw is actually Martian Manhunter. Kara and Alex Danvers have known about Henshaw's secret identity for a couple of episodes now, but Martian Manhunter recently revealed himself to the world in order to stop Red Kryptonite Supergirl from destroying National City. So, who is Martian Manhunter aka J'onn J'onzz in the DC Comics?

According to his comic origins, J'onn J'onzz is a member of the Green Martian race and a Manhunter, which is their version of a police officer. J'onn had a wife and daughter on Mars, but both were killed when a plague targeting the Martians spread throughout the planet, causing psychosomatic stress that tapped into the Martians' fear of fire and led to victims bursting into flame. Thinking himself to be the sole survivor of his planet and his race, as well as witnessing the deaths of his family, J'onn was left mentally unstable. Then, an errant scientist brought him to Earth and restored his mental health. J'onn went on to help found the Justice League of America and be a part of various other hero teams.

The history of J'onn J'onzz on Supergirl is much the same as it was in the comics, as we learned in the Season 1 episode "Strange Visitors From Another Planet." In the episode, J'onn revealed that the Green Martians were attacked by the White Martians, who attempted to exterminate the more peaceful race. We learned that J'onn's family was killed and he was thought to be the last remaining Martian — that is, until a White Martian appeared in National City. However, we don't yet know how J'onn went from a Martian refugee to posing as Hank Henshaw and leading the DEO.

Leave that to "Manhunter," which according to the episode's official synopsis from CBS will answer all our burning questions:

In a preview clip from the episode, J'onn can be seen interacting with Jeremiah Danvers, further expanding on what J'onn told Alex earlier this season:

So, Supergirl isn't necessarily following J'onn J'onzz's comic storyline to the letter, and it seems the show will diverge even more from here on out while they explore his meeting of Jeremiah Danvers and infiltration of the DEO as Hank Henshaw. But, the spirit of the character stays true to the DC Comics and, let's be honest, J'onn J'onzz is one of the coolest characters on Supergirl — perhaps even giving the titular superheroine herself a run for her money. Now we'll get to learn even more about the Martian refugee J'onn J'onzz!