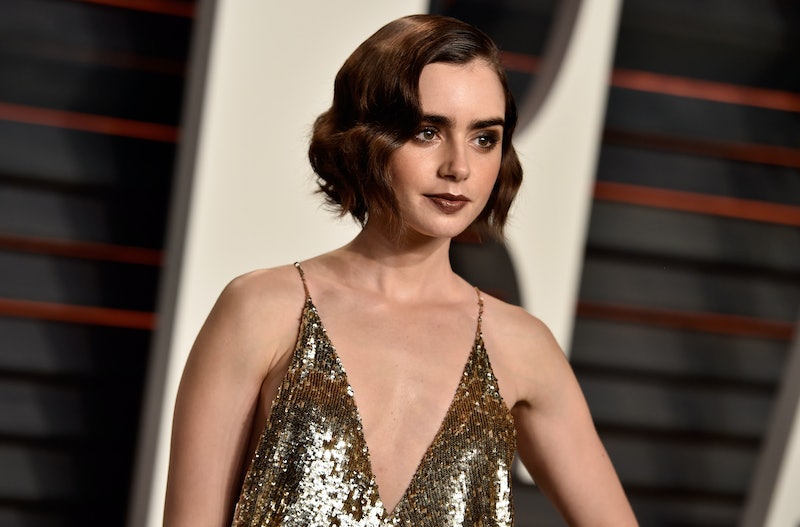 You may know her as the fairest of them all in the Snow White retelling Mirror, Mirror (that is, the not-Kristen Stewart one), and now she's going to tackle another deadly obsession with beauty. Lilly Collins is slated to star in To The Bone, a new Marti Noxon-directed comedy about a woman overcoming her battle with anorexia. And for those of you in the back who think they didn't hear me the first time, let me say it again: she's playing the lead role in a comedy about anorexia. Suffice to say that collective of words sounds like a risky creative move, but you know what? There may be something there.

It goes without saying that real eating disorders are no laughing matter, and in general, not a light and fun subject for a movie. You can't help but conjure up images of assorted characters in Girl, Interrupted or the disturbing 2013 Elle Fanning short film about bulimia, Likeness . It's not just the stuff of hardcore drama, it's a serious matter and a serious disease. However, if we're to trust anyone with a comedy about the subject, it would be Noxon. Listen up.

Even though To The Bone would mark her movie directorial debut, Noxon has extensive credits as a TV writer, which not only includes Mad Men and Glee (and creating Girlfriend's Guide to Divorce) but a longtime stint on Buffy the Vampire Slayer. Starting as a story editor in the second season, Noxon eventually leveraged herself to show runner status towards the end of the series, and wrote a hell of a lot of shows along the way. Among those shows were episodes like "Beauty and the Beasts," which, among many things, tackled abusive relationships. Noxon's extensive Buffy career ensures that she's dealt with writing a lot about dark struggles from a feminine perspective... all the while mixed with a sharp sense of humor.

That aside, To The Bone is reported to be inspired by Noxon's own experiences with an eating disorder. It can be assumed, then, that she'd be able to approach the subject not only from a personal stand point, but with frankness and sensitivity.

Certainly it's a tricky road to go on, but at the same time, it has all the potential to be brilliant, and if nothing else, different. Instead of yet another garbage superhero sequel or butchered reboot of another '90s classic, an original piece that opens a conversation on a woman's struggle (and although men can certainly have anorexia, women are allegedly more likely to suffer from it). And if you look at something like the Jenny Slate-starring abortion comedy Obvious Child, we're definitely entering an era where you can successfully blend comedy with an otherwise dramatic subject.

This definitely has promise. So best of luck to Collins and Noxon as they embark on this unconventional journey, and we'll stay tuned for more updates.