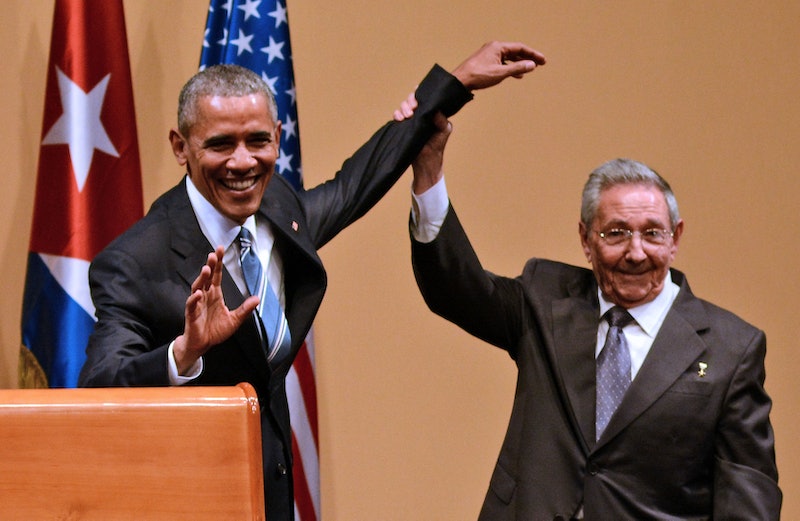 No one can deny the optimism pulsating through Barack Obama's visit to Cuba. The first sitting U.S. president to visit the country in nearly 90 nearly years exuded a positivity and warmth, landing Sunday with the whole first family and happily playing tourist throughout Old Havana. As the U.S. president strolled through the Cuban capital, he was greeted by cheers of "U-S-A, U-S-A," a scene that was long-considered inconceivable, at least while the Castros remained in power. But despite this good will and even a special baseball game, the attempted Barack Obama-Raul Castro love fest degenerated into an awkward, tension-filled affair at a joint press conference on Monday.

Sure, Obama and Castro did a great job smiling and shaking hands at Havana's Palace of the Revolution before they made their respective speeches. But then once the two leaders actually started talking, it became abundantly clear that we weren't going to get some Amy Schumer-Jennifer Lawrence #FriendshipGoals. Within minutes, Castro said the United States must fully lift the embargo, declaring "its removal will be of the essence to normalize bilateral relation." Castro doubled-down on addressing controversial topics, proclaiming it "will also be necessary to return the territory illegally occupied by Guantanamo Naval Base." Boom.

Apparently, the Cuba-U.S. relationship wasn't fully thawed; the cracks were plainly showing in this presser, epitomized by the wonderfully awkward vine of Obama and Castro attempting a high-five/handshake/definitely-not-even-a-bro-hug.

Frankly, watching Obama and Castro muddle through the tense, smile-for-the-camera press conference was a lot like viewing the rejected contestants from ABC's The Bachelor face off against Ben Higgins: a number of superficial attempts at restraints with passive aggressive insults and jabs crashing through every so often.

For one, Castro was pulling some Olivia-level, detached-from-reality insults. After bringing up Gitmo and the embargo, Castro threw some real shade when it came to human rights. While not actually addressing the major human rights violations that his administration has been accused of — or the fact that dozens of human rights protesters were arrested a day hours before his very speech — Castro took some swings at the U.S. "Actually, we find it inconceivable that a government does not defend and insure the right to health care, education, Social Security with provision and development, equal pay and the rights of children," Castro said. "We oppose political manipulation and double standards in the approach to human rights." It was about as enraging as watching Olivia's two-faced interactions whenever Ben was out of sight.

A few other key pop culture moments came to mind while watching Castro taking less than subtle jabs at the U.S. human rights record and diplomatic policies. One was watching Hugh Grant as the British Prime Minister in 2003's Love Actually in the scene where he throws the U.S. President (played by Billy Bob Thornton) under the bus. But that would be giving Castro too much credit for a speech that was drenched in a frustrating hypocrisy, which was then coupled with an irritatingly evasive and mendacious answers to reporters' questions. The most laughably was when Castro was asked by a reporter about Cuba's political prisoners:

Meanwhile, Obama often resembled Bachelor Ben — namely, in the way he acted sufficiently considerate and seemed to be putting up with a lot of nonsense in the hopes of achieving some long-term goal, however unlikely it may be to achieve. Obama attempted to throw a dose of deference Castro's way. He thanked Castro for his "courtesy and spirit of openness" and said his daughters "wanted to come to Cuba because they understood and we wanted to show them the beauty of Cuba and its people." It was kind of like the way Ben complimented Caila and tried to seem like he really cared about her ("I will miss you, so many things about you"), even as he sent her packing after their night in the fantasy suite. Or, like any of Ben's attempts at seeming genuinely attentive to The Bachelor contestants.

Overall, Obama came off as much more amenable than Castro, but, arguably, because he has the upperhand. Obama said, 'I actually welcome President Castro commenting on some of the areas where he feels that we’re falling short, because I think we — we should not be immune or afraid of criticism or discussion as well." But the thing is, Cuba criticizing the U.S. on basic human rights is like watching Lace accuse Ben of not making "enough eye contact" with her — it's such a minor fault in the grand scheme of things the accuser is the one who ends up sounding deluded and petty.

But at the very end of the press conference, Obama seemed more like The Bachelor host Chris Harrison; watching Obama trying to coax Castro into answering NBC's Andrea Mitchell's question about Cuba's political prisoners was like watching Harrison trying to convince Ben and Lauren to get married on live television. "It’s not correct to ask me about political prisoners in general. Please give me the name of a political prison, and I think with this is enough," Castro said in a huff that was slightly less uncomfortable than Ben's refusal to tie the knot before the studio audience.

Here's to hoping the future U.S.-Cuban relationship will go a lot better than the vast majority of the ones formed on The Bachelor.