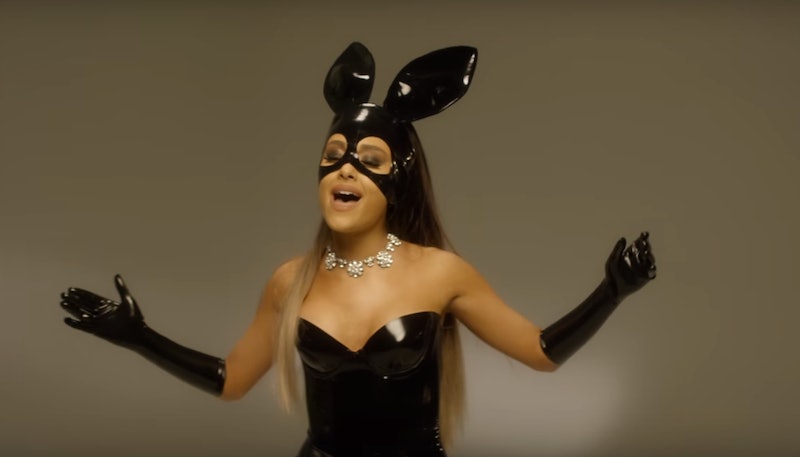 The diminutive diva with the mighty ponytail and the even mightier voice dropped a red-hot a cappella version of one of her red-hot new singles, so prepare yourself accordingly. (If there was ever a time to draw an ice bath before you watched a music video, that time would be now.) Sunday, pop powerhouse Ariana Grande shared a music video for an a cappella rendition of “Dangerous Woman,” and it is, it is, it is my everything. What the vocals-only version of the undulating track lacks in funky guitar, it makes up for in bouncing bunny ear headpieces and guitar solo pantomime. Oh, and I suppose the scorching vocal performance does not hurt, either.

Dressed in the the vinyl rabbit costume from the Dangerous Woman cover, Ari bops around in front of a neutral backdrop and belts out the title track from her to-be-released third album. Throughout the vid for the a cappella-ified "Dangerous Woman," the Scream Queens star nails all of the big notes, nails all of the quieter notes, and nails delightful ad-lib after delightful ad-lib. And then, just when we think the video could not be more majestic, she surprises us with a very special gift: an impression of electric guitar.

What does Ari do at the end of this face-melting vid?

She takes a bow, of course.

And then, before we can be like "ARI WHAT ARE WE SUPPOSED TO DO ABOUT OUR MELTED FACES?", Ari laughs and scampers away.