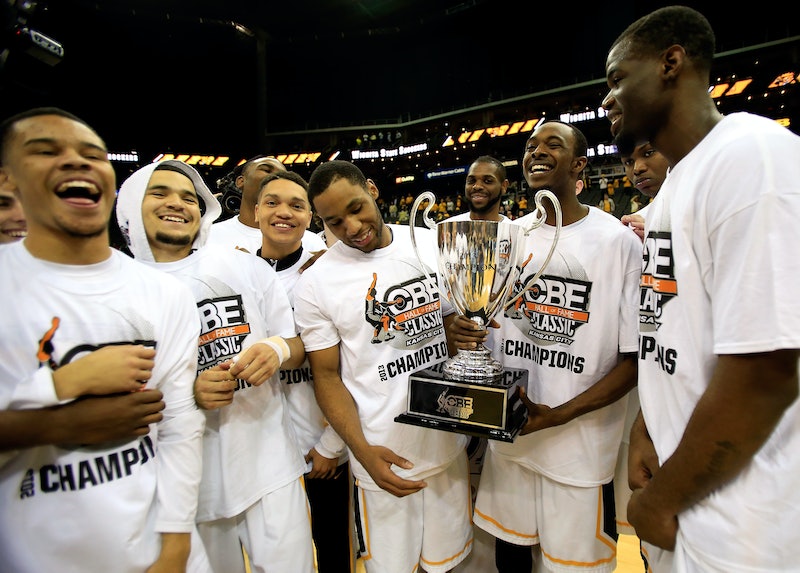 In March, when it comes to college basketball, anybody can win one game, and that's all it takes to advance for one more shot in the month-long single elimination spectacle that is the Big Dance. The format of the NCAA Men's Basketball Tournament gives rise to miraculous Cinderella stories of tiny mid-majors toppling the unsuspecting giants and imbues new meaning to the phrase "every second counts." But some moments stand out above the others as the craziest March Madness moments in NCAA Tournament history.

This year is already making history and we're only through two rounds of play. Almost 30 percent of the 48 games so far have ended in upsets and (yes, literally) more than half of games have been decided by 10 points or less. In just one weekend, we've seen insane comebacks, buzzer beaters, and what will undoubtedly be recalled as one of the most improbable college basketball upsets of all time. The basketball royalty from the Atlantic Coast Conference wound up with six teams in the Sweet 16, which is not just a record for the most teams still dancing from one conference but is also twice as many teams as the closest conference. It's hard to believe that the excitement is just beginning.

The NCAA Tournament, as you might have noticed, brings out an overwhelming and primitive dedication from the basketball community. And I'll call it a community because I don't believe the term "fan" does justice to the people who stick with their team through thick and thin, travel to far away postseason games with their last few airline rewards miles, and bunk in crowded hotel rooms just to be a part of the magic. These are the people that will have beers already waiting for the assistant coaches after a loss to discuss the scouting report for the next game and the people that will wear their colors with pride after a season-ending defeat.

These astounding moments in NCAA Tournament History are created by the players and coaches leaving every last drop of fight on the court, and the roars from the crowd, fueling their teams to victory, are the ultimate collaboration which, together, are March Madness.

Here they are in chronological order, because ranking them would do them each a disservice.

NC State entered the tournament in 1983 as a six seed and upset a three seed, a four seed, and two number one seeds on their way to bringing home their second National Championship banner. Coach Jim Valvano and his Wolfpack were the perfect picture of a Cinderella story with a happy ending. Only one other six seed has won the NCAA title since.

Love Laettner or hate Laettner, this shot, which is still simply referred to as "the shot" (or occasionally with additional expletives), is a shining example of maintaining one's poise. In the huddle before this play, Christian Laettner told his teammates, "If Grant makes the pass, I'll make the shot." Can't hate on his confidence. A couple days later, Duke would go on to win the final game and take the title home to Durham for the second straight year.

Yeah, yeah Duke was really good in the Battier/JayWill era, but this game marked the fourth time that Duke had played Maryland that season, and Lonny Baxter and company were dead set on getting revenge for The Miracle Minute, an improbable ten point comeback in the final 60 seconds of their game in January. The Blue Devils once again found themselves down— this time by 22 points, albeit in the first half, and clawed their way back into it to claim victory, advance to the championship game, and defeat the Arizona Wildcats to win it all. The 22 point comeback is the second biggest comeback in NCAA Tournament history.

Everything about Davidson was underrated in 2008. They were rated a 10 seed, and their baby-faced point guard, who somehow escaped the radar of the powerhouse teams before arriving at Davidson, was future NBA Champion and MVP (actually...) Stephen Curry. Davidson upset a seven seeded Gonzaga, then the dominant two seeded Georgetown, absolutely demolished three seed Wisconsin, and only just lost by one basket to top seeded Kansas in the Elite 8. Nobody could come up with a defense to deal with Steph Curry, and to this day, nobody has.

Anytime a lower seed is about to dethrone a giant like Kansas, you'll hear announcers talk about "Farokmanesh." Ali Farokmanesh became a March Madness hero when he started raining threes in the second half of their game against the top seeded Kansas Jayhawks, and his name is now synonymous with big performances in big moments from the unlikely heroes from small schools.

Here's another thing you didn't see coming at the time but makes perfect sense in hindsight. Draymond Green is an amazing passer. That assist was perfect. Korie Lucious unleashed this clutch 3 while filling in for injured star guard Kalin Lucas who suffered a leg injury. Without Lucas, the Spartans blew a 16 point lead in the second half, but thanks to the heroics of Korie Lucious and Draymond Green, they advanced to the Sweet 16, and later, to the Final Four.

To be perfectly honest with you, I had never heard of the Wichita State Shockers before their 2012 tournament appearance, which was less than stellar, getting upset by 12 seeded Virginia Commonwealth in the first round. So, when they were back in the Big Dance as a nine seed the following year with all new faces, having lost it's top five leading scorers, nobody thought much of them. That is, of course, until they started beating literally everyone including the top seeded Gonzaga and two seed Ohio State to advance to the Final Four.