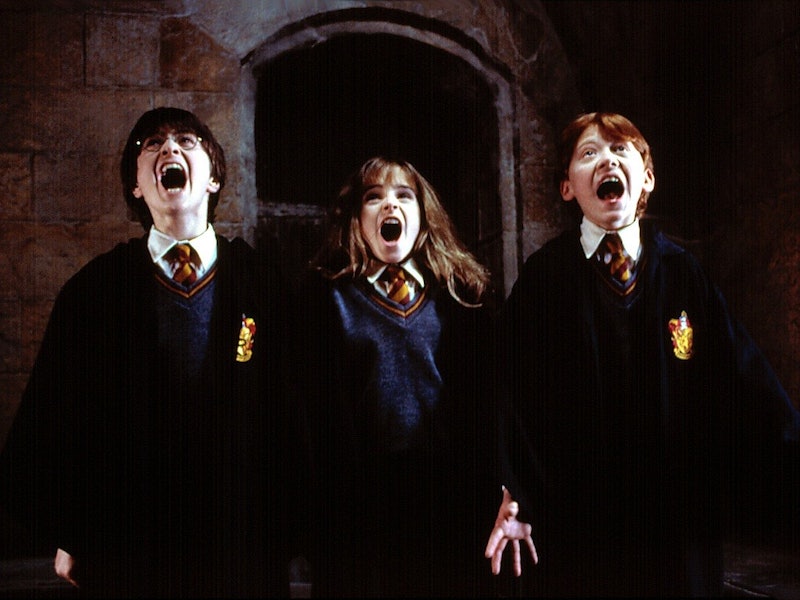 Over the course of one decade, author J.K. Rowling created an entire world that enchanted readers across the globe. In the wizarding world of Harry Potter, she conjured characters, creatures, and conflicts out of thin air — as if by magic. By the end of the last novel, The Deathly Hallows, it was clear that Rowling had had a meticulous plan from the very beginning, with seemingly insignificant details in early novels becoming crucial plot points later in the series. By just about any metric, that's an impressive feat; but that doesn't mean it's infallible. Yes, there are even plot holes in Harry Potter .

That's not to belittle Rowling's accomplishment. In fact, I hold the Harry Potter books and movies in very high esteem. But no author or book or movie should be above a little friendly ribbing. (The Harry Potter Honest Trailer always gives me a good chuckle, for example.) And to Rowling's credit, you have to dig pretty deep to even come up with a sizable list of plot holes.

So let's begin our trip down nit-picky memory lane with the one that started it all, Harry Potter And The Sorcerer's Stone . Being relatively slight of plot — at least when compared to the latter, more hefty tomes — most of its holes are admittedly of the world-building variety that hold true for the whole series. (Except for Quirrell; his plot kinda made no sense. More on that in a bit)

Without further ado, I solemnly swear I am up to no good…

The fact that wizarding mail is delivered by owl is one of those charming little details that does so much to help craft the audience's image of the fictional world — but completely falls apart upon closer examination. If witches and wizards are capable of apparating instantly from place to place, poking their heads into any fireplace in the world via floo powder, or sending house elves to deliver messages for them, why would anyone entrust a letter to an owl that's capable of being blown off course, getting intercepted, or simply getting lost?

2. Ollivander Would Be Bankrupt

When Harry goes to buy his wand, it costs him seven Galleons. We also learn that every wand has a core that contains one magical item such as a phoenix feather, a dragon heartstring, or a unicorn hair. However, we also learn thanks to Harry's shopping that unicorn hair costs 10 galleons a strand. Ollivander is charging three galleons less than one of his production materials costs by itself! That's not very good business sense, even for a wizard.

"There's not a single witch or wizard went bad who wasn't in Slytherin" Ron advises Harry before their sorting. (Hagrid tells Harry the same in the book.) But if this were true, then there are a couple of glaring inconsistencies. One, if every bad wizard was in Slytherin, then wouldn't everyone have known that Sirius Black hadn't actually turned to the dark side and betrayed the Potters? And by the same token, shouldn't Peter Pettigrew have been in Slytherin, since he did ultimately "go bad" as Ron put it?

4. The Sorting Hat Is A Sham

Given that there appear to be five boys and five girls per year in every house, then how does the Sorting Hat actually work? It can't actually be on merit, as we're led to believe, or the numbers in each class would be more random. Rather, the hat seems to operate based on a quote; meaning, if the first five girls it sorts all happen to be placed in Ravenclaw, then no other girl could be placed in that house that year, no matter how smart she was.

5. No Wizard Left Behind

American schools may be dedicated to the notion of "no child left behind," but Hogwarts clearly doesn't have similar concerns. I'm sure that Potions, Transfiguration, and Charms are all very essential subjects for survival in the wizarding world. But what about basic reading and writing? How can anyone work at Gringotts if they've never studied math? Do wizards think that any facet of world history that doesn't include magic is not worth studying? These students seem ill-equipped for the world outside of Hogwarts.

Voldemort killed Harry's parents — and was subsequently defeated — on Halloween. When Dumbledore drops a young Harry off on the Dursleys' doorstep, McGonagall comments that the day will likely be known in the future as Harry Potter Day… and yet, when Halloween rolls around in Sorcerer's Stone, not a single character mentions anything about this new holiday. So did the wizarding world decide that Voldemort's defeat wasn't so important after all? Why does absolutely nobody mention that it's the anniversary of such a momentous occasion?

Speaking of Halloween, Professor Quirrell famously let a troll into the school on that holiday so he could distract Dumbledore long enough to try to steal the Sorcerer's Stone. Who can forget Quirrell's panicked yell as he burst into the Great Hall during dinner and passed out in the aisle? And yet, as the Defense Against the Dark Arts teacher, Quirrell had already provided a troll as his contribution to the defense of the Stone — a fact that Dumbledore would have known very well. So why was he not in the least bit suspicious that his DADA teacher seemed to have developed a fear for the stupid creatures literally overnight?

Quidditch is awesome. A sport played in midair on broomsticks? Yes please! Except, it doesn't actually make much sense. One goal is only worth 10 points, but catching the Snitch is worth 150?? That means that the only way your team wouldn't win if you caught the Snitch is if you were already behind by more than 15 goals — a ridiculous amount. That makes the Snitch essentially a trump card, rendering the rest of the game basically meaningless. Yes, it is possible to catch the Snitch and still lose but that must be an extremely rare occurrence. Also, they only play four games over the course of an entire school year? That seems low. And despite the fact that there are literally hundreds of different kinds of sports in the real world, wizards only ever came up with one? Hmm…

Since none of us probably knew what this term meant the first time we saw the movie or read the book, it's easy to forget that the Sorcerer's Stone is really just a MacGuffin; it doesn't actually make that much sense. Dumbledore knew Voldemort was after it and would be able to come back to power if he attained it — why wouldn't he just destroy it in the first place if the stakes were that high? Why was that the last resort and not the first? Why set up an obstacle course that literally the most powerful wizard in the world would easily be able to overcome? And why would Harry decide that stealing it himself would be the best way to protect it? Did he really think that Voldemort would have a harder time getting it from the hands of an 11-year-old than from behind all of Dumbledore's enchantments?

10. Quirrell Should Have Won

When Dumbledore deposits baby Harry at Privet Drive at the beginning of the film, Harry's just a small baby — as he rightly should have been. Yet, when Hagrid presents Harry with a photo album at the end of Sorcerer's Stone, his parents can be seen holding what is clearly a young toddler, one year old at the very least. Did the Potters somehow travel through time? Or is that not Harry they're holding in the photo? Why the glaring inconsistency, given that the young age at which Harry lost his parents is such a big plot point?

Nobody's perfect — no, not even J.K. Rowling. But even with these plot holes, I think we can all agree that Harry Potter And The Sorcerer's Stone remains a classic… a classic with bankrupt wandmakers and nonsensical sports, to be sure, but a classic nonetheless.