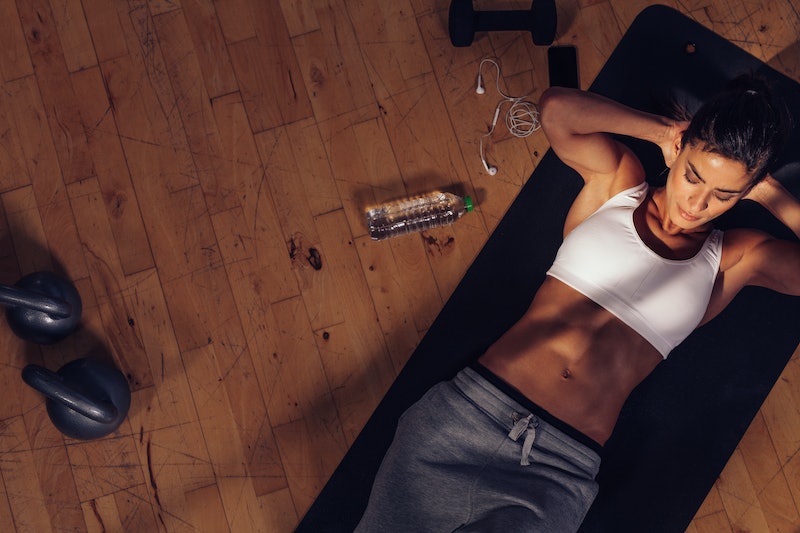 Raise your hand if you've ever been falsely promised the myth of flat abs. I know I've been dumb enough to fall for it once or twice, even though I'm not proud to admit it. I even tried a 30-day plank challenge once (I lasted a full 72 hours). Don't worry, I learned my lesson.

No matter what the newest, hottest workout trend is, there's usually some wild claim tossed in there about how our midsection can magically shrink within a short amount of time. These claims are generally a pile of rubbish, though. The promise of "sexy abs" is just another way of society trying to get us to police our own bodies so we fit into a conventional mold — a mold that is incredibly problematic and often unattainable.

That said, there are a lot of good things to be said about having a strong core, none of which have anything to do with how you look. The muscles around your belly button connect your lower half to your upper body, and they keep you safe during any and all movements you make throughout the day. So the more inflexible and weak your abs are, the more likely your arms and legs won't be able to function at their best. Plus, a healthy core contributes to less back pain and more protection for your internal organs.

So it truly pays off to pay attention to your midsection, but not for the reasons they tell you on the cover of most magazines. If you're looking for the single best way to get a strong core, I suggest you consider trying barre workouts. It’s a ballet-inspired fitness regimen mostly centered around the handrail used in ballet training — the barre — with some Pilates influences tossed in the mix, and it's a new trend for good reason. Here are five reasons why barre comes out on top as the best workout for your core.

1. Everything Is A Compound Movement In A Barre Class

Without even realizing it, the exercises you do in a barre workout target multiple groups of muscles all at once. That means you don't have to only do ab-specific movements in order to get results. In a barre class, it's impossible to do any squat, fold over, or dip without tightening your core. Doing so is precisely what allows you to correctly perform each movement.

Burr Leonard, fitness instructor and founder of The Bar Method, told Greatist that barre is "a highly effective workout since you're doing two to four movements... at a time in each move." You can stretch, strengthen, and tighten all at once, from head to toe, and it all happens within the blink of an eye.

With many other kinds of workouts, there is a time set aside for ab work. However, by the time you get there you're tired and bored, and probably ready to toss in the towel. Barre will engage your abs from start to finish, so you won't even have to worry about adding in an extra session of planks at the end.

Barre is renowned for packing a lot of punch in the tiniest of movements. It's the subtlety that sharpens the tiny muscles you can't get to with yoga or a boot camp class. Instructors will show you how to angle your legs and arms in a specific way that will activate individual muscles you probably didn't even know you have. These exercises will work small corners of your abdominals that contribute to a stronger core overall.

If you're trying out barre for the first time, focus on being precise with each isometric movement. Even the smallest adjustments can make a big difference in the results you want to get. If you do it right, you can kill two birds with one stone: build overall stability and target even the smallest of muscles.

Your core, which includes your pelvis, is the stronghold of your entire body. It keeps your back stabilized and improves your posture. If you constantly do high-impact exercises in an attempt to score abs, though, you could put yourself at risk for injury, which would defeat the whole purpose of protecting your spine.

However, barre workouts are so low impact that you almost don't need to worry at all about injury. You use your own body weight (and sometimes weights as small as 1 lb) to perform the type of resistance training that will grant you with a powerful midsection, from back to front. Because you aren't taking any risks with sudden movements, barre routines can afford to combine numerous exercises into one, meaning you are even building stability in your lower back in those compound movements.

Think about the usual suspects of a gym workout. Bicep curls, crunches, and lunges are all concentric contractions, which are movements that stretch and then shorten the muscle. While this is great to get visible results, the small movements that comprise a barre workout do something entirely different.

Isometric contractions build up just as much strength in your core as a typical workout — without changing the length of your muscles at all. That's why barre enthusiasts swear to their clients that getting lean and long isn't a far-fetched expectation. Because if your muscles aren't shrinking, your posture probably won't collapse either.

5. Barre Builds Endurance In Your Abs

One more thing about the brilliance of isometric movements: they beef up your core endurance way more than you would expect. Nicole Bushong, barre expert and physical therapist at the Center for Advanced Orthopedics and Advanced Medicine in Michigan, told Greatist that the high reps, low weight exercises you do in a barre class tire out slow-twitch muscles. "You can do more reps with smaller movements like these, which fatigue your muscles in a different way," Bushong said. It's a physical challenge that trains your body to stay strong for a longer amount of time.

If you add a barre routine as a supplement to whatever physical activity you love most, it might improve your physical performance in the long run. At the very least, you'll ensure you don't get bored with your workout, which, as you know, would be a total tragedy.

More like this
Jiu Jitsu Champ Kim Blake Is Pushing For More Women In The Sport
By Kathleen Ferraro
9 Exercises To Try For Volleyball Strength
By Carolyn Steber
Why Experts Say Sleeping With A Fan On Isn’t Totally Risk-Free
By Sophie McEvoy
Scotland's First Period Dignity Officer Is... A Man?
By Darshita Goyal
Get Even More From Bustle — Sign Up For The Newsletter