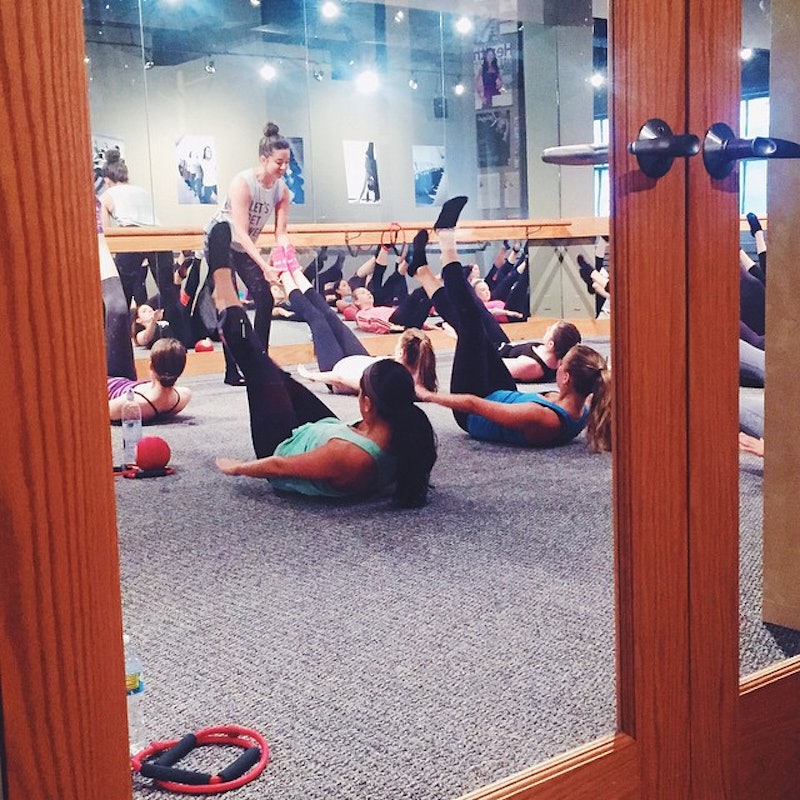 By now, you’ve probably caught wind of Pure Barre, a hot new fitness trend that is spreading like wildfire. It’s a ballet-inspired fitness regimen mostly centered around the handrail used in ballet training — the barre — with some Pilates influences tossed in the mix. Not only does Pure Barre burn fat and tone muscles, but it also helps with your balance and posture. Carrie Rezabek Dorr, a dancer and choreographer, designed the technique and opened her first studio in a basement in Birmingham, MI in 2001. It became a franchise in 2009 and is now the most successful barre establishment in the United States.

It was hard for me to forget the image of Natalie Portman’s svelte ballet bod in Black Swan , so when I heard that similar results could be found through Pure Barre, I decided to give it a shot. Since I’m short (5’2 on a good day) but broader than most petite women, I was looking for a new workout that would help me slim down and — dare I say — look a bit taller. To my surprise, I got hooked; I was going four or five times a week for a few months and saw some amazing results.

But, as a yoga teacher, I also had an opinion or two about what could be improved. Because, let’s face it, no workout is perfect. So before you head to your first Pure Barre class, read up on these pros and cons.

Pro #1: You Get Lean And Toned Everywhere

It’s a full-body workout that produces incredible results — fast. Their motto is “Lift, Tone, Burn,” and it focuses on isometric movements. This helps you work into the small muscles, producing a slender, rather than bulky, look. You start with a warm-up, and move into upper body strengthening, where small weights are optional. The barre is used to target hips, thighs, and butt, then comes the abdominal work (the most effective I’ve ever encountered). Class ends with a cool-down/stretch session to work on flexibility. The technique is effective and it lives up to the hype if you keep going regularly.

I was shocked by the prices at first, especially coming from the yoga world where I already thought some of the vinyasa class packages were getting a bit too pricey. For example, one month of unlimited classes is around $200. Eek! Obviously, you’ll get the most bang for your buck if you sink your teeth into an annual pass, but not all of us have that kind of cash to drop at once. Also, the more you get addicted, the more clothes you’ll buy in the lobby, which are specifically made for the workout and prey on you when you're full of endorphins. Be prepared to drop over $100 for a pair of pants.

It’s a low-impact workout that puts zero pressure on the joints. Their shtick is all about lifting and toning by using your own body or weights as small as 1lb. None of the movements are sudden or unnatural, so if you’ve got some knee or shoulder or back issues, this could be a great option for you. It’s even completely safe for pregnant women to do (always check with your doc first, though!). The instructors are attentive, so they will correct you if you’re doing it in a way that might be harmful.

There is certainly good to be had from a systemized workout — you know what you’re going to get and it’s proven to work. But if you crave a fitness regimen that mixes it up a lot, to keep you and your body guessing, like the cross training in Crossfit, Pure Barre probably isn’t for you. Every session is structured the same way, even though the movements may vary. Muscle memory happens fast, so you could reach a plateau if you’re just going through the motions.

Pro #3: You Can Lose Weight Quickly (If That's Your Goal)

OK, so shedding pounds definitely isn’t the most important thing we look for in a exercise regimen, but for some, it’s a welcomed addition. Pure Barre revs up your metabolism; it may not look like a tough workout, but, trust me, your heart rate gets up there. It also burns fat and builds lean muscle (which also burns fat while you’re in resting mode). I was shocked to see the extra layer of pudge on my tummy slowly disappear — and I hadn’t even changed my diet in an attempt to lose weight.

Con #3: There Isn’t Much Diversity

To be honest, I initially felt uncomfortable walking into my first few Pure Barre establishments because I was the only non-white person in the whole place. The class prices and marketing schemes tend to attract a certain demographic of folks. The yoga industry had this same problem for many years, but there are tons of studios that have been working hard to diversify their clientele base as a response. I’m hoping Pure Barre will eventually move in that direction too.

As my instructor said before my first class, “This will be the fastest 55 minutes of your life.” She. Was. So. Right. It went by so quickly. They play fun, dancey music you can’t help but bob you head to, like Beyonce and Ellie Goulding. I found myself singing along to the songs and grinning like an idiot. Every teacher I’ve encountered is engaging and friendly, qualities the franchise looks for when hiring, and they create the kind of environment you want to be in when you’re a novice.

I love being able to take my exercise on the road, whether it’s doing a cross-training session or a hatha yoga sequence outside, so I was slightly disappointed when I realized that the lack of barre made such a difference.There are DVDs and equipment (also expensive) you can purchase if you can’t make it to class or can’t afford the packages, but it’s difficult to keep up this particular barre practice without a barre. Just having a mat and the little Pilates-like ball isn’t going to be enough to do all their movements. There are alternatives, though.