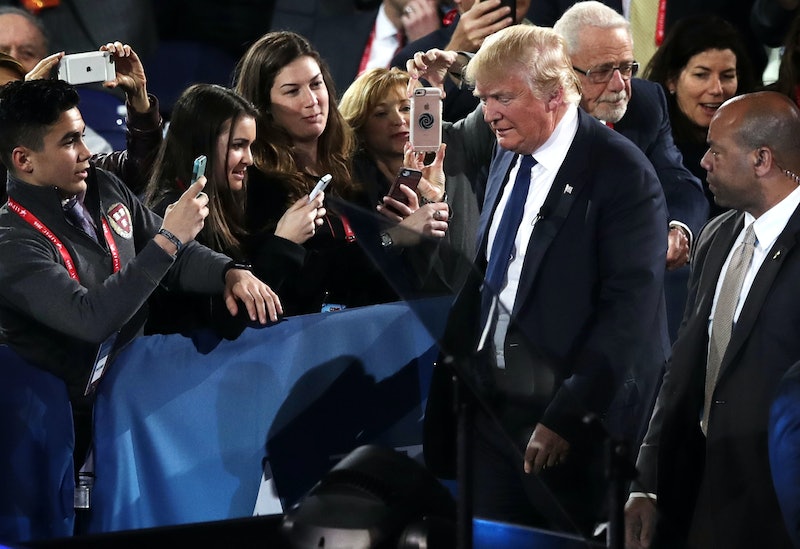 Hours following the three attacks in Brussels, GOP frontrunner Donald Trump refrained from sending his condolences to the nation and related it to American border security and controversial interrogation methods instead. In a phone interview with Fox & Friends after the Brussels attacks, Trump suggested that border security is the best way to prevent America from becoming a "disaster." Update: ISIS has claimed responsibility for the Brussels attacks in an announcement via Amaq, a news service affiliated with the group.

I've been talking about this for a long time, and look at Brussels. ... Brussels was a beautiful city, a beautiful place with zero crime, and now it's a disaster city. It's a total disaster.

For the sake of security, America will have to consider ways it can protect itself from similar attacks and it's a given that every other country will be doing the same thing. Though it's an unfortunate reality, it doesn't justify depicting Belgium as though it failed.

Leaders are expected to remain strong in terrifying times like these, but they are also expected to show a softer side. In this situation, an initial message of solidarity and empathy would have paid better tribute to the innocent victims of the attack.

Trump didn't budge in his response while talking with TODAY's Savannah Guthrie and Matt Lauer in another phone interview on Tuesday morning. As opposed to describing Brussels as a "disaster," he described it as a "total mess" this time.

Brussels is a total mess. They're just a city that used to be one of the finest and one of the most beautiful and one of the safest cities in the world, and now it's a catastrophic, very dangerous city where the police have very little control.

Gross lack of sympathy aside, Trump's statement is simply incorrect. Any city in the world is vulnerable to being attacked by covert suicide bombers, even if it has strong border control policy. Whether he wants to admit it or not, one of the greatest threats to the U.S., Belgium, or France is domestic terrorism. Alleged Paris attack mastermind Abdelhamid Abaaoud, for example, was a Belgian citizen. Just four days prior to the attacks, authorities arrested his Belgian-born co-conspirator Salah Abdeslam, who was found hiding in a Brussels safe house. These terrorists were the unassuming sons of immigrants, not fugitives jumping a lax border. If anything, it's suspicious travel among domestic citizens that should be more closely monitored — for example, Abaaoud travelled back and forth to Syria in 2013 and was even featured in one of ISIS's videos.

Furthermore, Trump claimed Belgium's police has "very little control." That's funny, because, currently, the nation is a temporary military state. After the bombs went off, Belgium announced it was under a high security alert and gave police permission to deploy the army on the streets and act as they see fit. And quite frankly, Trump's indirect promotion of a "police state" is frightening.

Trump continued his conversation with Guthrie and Lauer and failed to display adequate understanding of the situation's complexity. This isn't a black-and-white battle between Islam and the West.

Belgium is no longer Belgium. ... Belgium is a horror show right now. This all happened because frankly there's no assimilation. They are not assimilating for whatever reason. They don't want laws that we have, they want Sharia Law, and you say to yourself, at what point, how much of this do you take?

ISIS claims to unite under the umbrella of militant extremist Islam, but in reality, the Islamic label is a fairly successful ploy that many conservatives, including Trump, have bought. The criminal history of the Paris attackers suggests these people weren't fundamentalist Muslims who prayed each day for the religious takeover of the world. They were teenagers with more deeply rooted problems who found an ideology to ignorantly cling unto. If they made the conscious decision to resist assimilation, why would they have been so intensely drawn to a terrorist group that shares a common, albeit atrocious cause?

They're not refusing assimilation for "whatever reason" as Trump claims. In some cases, they've grown to hate Western society because it rejects their dress, their religion, and their culture. It refuses to allow them to assimilate. Trump's focus on closing our nation off to people we don't know is a scare tactic that exacerbates the division between Western and "other." Though terrorism can never be excused or justified, it's vital to remember that the problem is not as simple as Trump makes it out to be.

Most importantly, the tragedy in Brussels shouldn't be an arena for this type of discussion. Not yet. Right now, it needs to be shown sympathy, solidarity, and support.