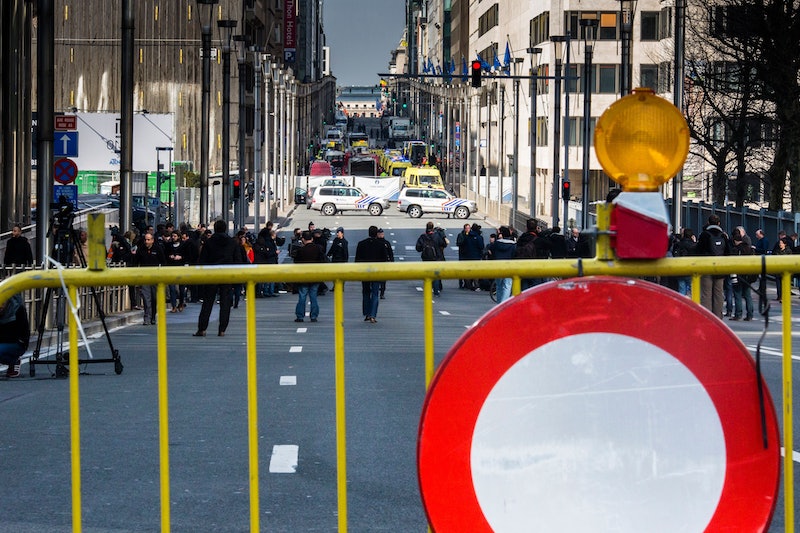 On Tuesday, March 22, the city of Brussels is on lockdown following two explosions in Brussels' airport and metro that led to the deaths of 34 reported victims so far. In response to the attacks, people are posting heartbreaking Brussels memes on Twitter to show their solidarity for the victims of the attacks and those who are affected by them. Little is known about the incidents themselves so far — Reuters is reporting that the Brussels attacks are thought to be acts of terrorism and potentially the work of suicide bombers.

While the city itself is urging residents to stay indoors and has issued a maximum terrorism threat, people outside of the city have taken to social media to show their support in a manner reminiscent of the Paris terrorist attacks and Charlie Hebdo. The memes and images they are sharing are powerful, impacting expressions of their support and love for the victims of the Brussels attacks. The memes, which are circulating very quickly on platforms like Twitter, Instagram, and Facebook, are accompanied by the now trending hashtags #prayforpeace and #JeSuisBruxelles in an outpouring of empathy and support from people around the globe. Here are among the most impacting of the memes making their way through social media in response to the attacks:

Callbacks To Other Attacks

"Solidarity with Belgium! We are all atoms of the same humanity!"