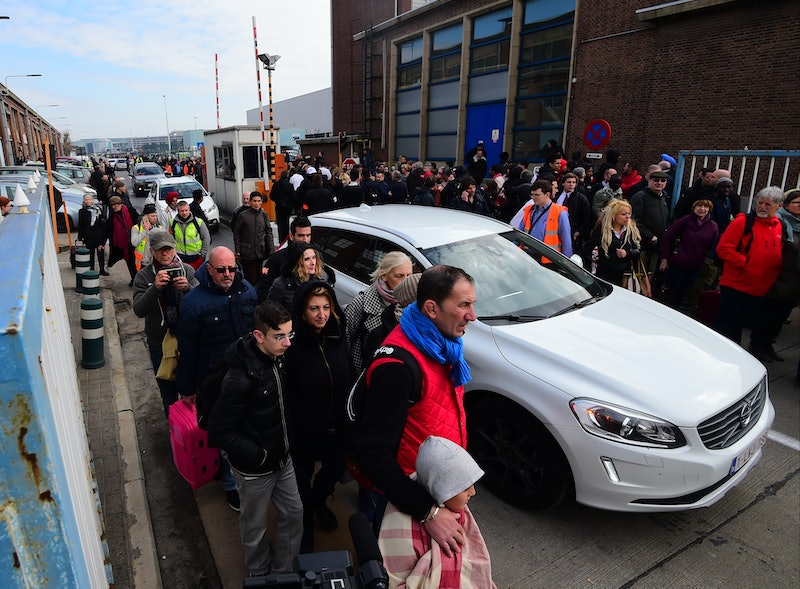 On Tuesday morning, a series of terrorist attacks hit Brussels, Belgium, killing at least 34 people and wounding at least 187, leaving some in serious condition. The bombings took place at the city's major airport and in one if its metro stations. Videos taken at the sites of the attacks in the aftermath of the blasts show scenes of fear and chaos, as survivors are evacuated from both locations.

The majority of videos, taken by people at the scenes and posted to social media, are obscured by smoke, showing groups huddled together or hurrying to escape the area. Arguably most chilling is the clip taken from a parking garage outside the airport immediately following the bombings. Smoke billows out of broken windows as people sprint away from the building, some dragging their suitcases behind them.

The city remained on lockdown for several hours after the attacks, though it is now being reported that the metro system will reopen at 4 p.m. local time with increased military surveillance.

The videos below may be disturbing to some viewers.

If you wish to help the victims and their families, there are several ways to do so.

More like this
This Creepy TikTok Trend Encourages Out-Of-Body Experiences
By Kaitlyn Wylde
What Is The Forest Personality Test? The TikTok Trend, Explained
By Georgina Lawton
7 Things We Learned From Rebekah Vardy's First Post-WAGatha Christie Interview
By Sam Ramsden
What We Know About Where Caroline Watt Is Now
By Catharina Cheung
Get Even More From Bustle — Sign Up For The Newsletter