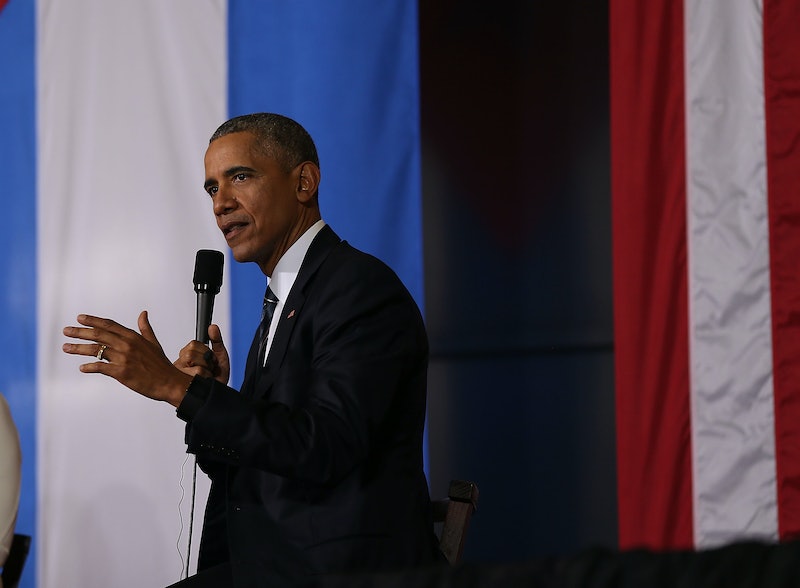 When the news was announced on Tuesday, March 22, that the city of Brussels had been attacked in what appeared to be a series of coordinated events, many government leaders, as expected, took to social media or released statements. Candidates from Donald Trump to Hillary Clinton weighed in on the matter, and President Obama even spoke from a Havana, Cuba, press conference to share his comments on the Brussels attacks. While the president's first lines, emphasizing the need for the world to "unite" in the face of terrorism, were certainly moving, it was Obama's mention of José Martí's poem "White Rose" that made for what was, perhaps, the strongest moment of an already-powerful speech.

Martí, a Cuban poet and journalist known for his criticism of inequality and his demand for unity across nations, already had a big presence in Obama's historic trip to the country; on Monday, according to The New York Times, the president visited his memorial, placing a wreath there in honor of the renowned writer, who died in 1895. So it makes sense that Obama would refer to one of Martí's own poems when speaking out on the Brussels attacks, especially "White Rose." Although Obama only referenced a few lines, said in Spanish, during his speech, the entire poem — a message of peace and friendship — was a perfect choice for a day in which the need for solidarity, not divisiveness, couldn't be more obvious.

The full translation of the poem is below.

I have a white rose to tendIn July as in January;I give it to the true friendWho offers his frank hand to me.And for the cruel one whose blowsBreak the heart by which I live,Thistle nor thorn do I give:For him, too, I have a white rose.