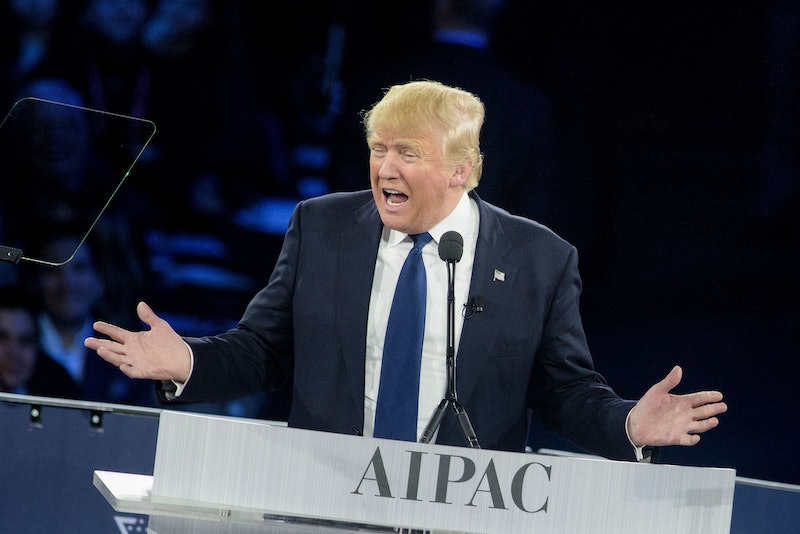 By now, Americans are used to seeing things like penis jokes, casual racism and misogyny, and unapologetic threats of human rights violations from our presidential hopefuls. However, Republican presidential frontrunner Donald Trump's interview with The Washington Post on March 21 offered some particularly striking insight into the bizarro world of politics in 2016. Equal parts baffling and horrifying, the entire transcript of the conversation — in which The Post's editorial board tried valiantly to draw concrete policy answers from the real estate mogul — will undoubtedly leave you wondering whether you're actually in the midst of a terrible, terrible fever dream.

It's significantly more difficult to gaze into the abyss of a lengthy Trump interview than it is to deal with the rage-of-the-day soundbites. The chest-thumping quotes and the not-an-answer answers rattled out in that familiar bluster are easy to poke fun at from a distance. However, it's often impossible to shake the creeping, existential terror at the thought of this overgrown toddler covered in a film of Cheetos dust becoming one of the major players on the American political stage. It's become clear that jokes about Trump (his rhetoric, his hair, his deplorable politics, etc.) remain ineffective at breaking his hold over American voters, despite the small comfort they offer his critics.

But the gift of this unedited Washington Post video (and accompanying transcript) is something that no one with access to a bottle (or six) of wine and a Twitter feed could pass up in good conscience. Here' are just a few of the most confusing, strange, and yikes-worthy moments that came out of the nearly 64-minute interview:

"New building. Yes this is very nice. Good luck with it."

Throughout the beginning of the interview, Trump seemed a bit preoccupied with architecture. First he wished WaPo's editors "luck" with their new building. He continued on this train of thought while describing "quality of the finishes" of his own building, elaborating on the quality of the marble in a way that seems out of place anywhere that's not a BBC adaptation of a Edwardian period romance. He later gave a tour of that building and gushed about them even more (again, very Pride and Prejudice).

One of the more disturbing images to come out of the interview was of Trump as a cheerleader. It was particularly puzzling considering how he'd said (literally only minutes before) that the country was "disintegrating." Is that the "Go, team!" spirit?

"I would make it so that when someone writes incorrectly, yeah, I think I would get a little bit away from malice without having to get too totally away."

Trump's dubious knowledge of libel laws (and the first amendment as a whole) is well-documented. But his comments about reporters and columnists who criticize him demonstrate how he seems to believe that expressing negative opinions about him is the same thing as telling lies. He assures the staff that, when it comes to libel laws, he would "just loosen them up." However, not much came of the discussion when he was pressed further on what that actually means.

"You know, I said that. I’d like to punch him. This guy was unbelievably loud. He had a voice like Pavarotti."

While addressing the instances of violence at his rallies, Trump offered some gleeful, mocking descriptions of protesters who were assaulted by his supporters in between promises that he "doesn't condone" that kind of violence. Yikes.

"I’ve had Muslims call and tell me you’re right with the Muslim thing, I think it’s a serious problem."

It's already taking considerable mental gymnastics to imagine any breathing human choosing to call Donald Trump about anything. So there’s pretty much no way to suspend disbelief enough to accept that a Muslim individual would willingly call him to say that they agree with him about “the Muslim thing.” (Reminder: Trump's consistent stance has been to "ban" Muslim people from the U.S. "until we know what's going on.")

"Uh, I am the least racist person that you will ever meet."

Uh, no. Let’s just be clear: The receipts do not lie. The Internet’s memory isn’t the longest out there, to be sure, but it’s difficult for Trump to deny that his general philosophy toward people of color has been less than stellar. His comments on Mexican immigrants, young black men, and refugees all seem to show that he looks, walks, and talks like a xenophobic, fear-mongering racist.

And here are two (dis)honorable mentions from The Donald:

"I'm an intelligent person. I understand what's going on."

More like this
'The Capture' Is Finally Back – & S2 Looks Tense AF
By Sophie McEvoy and El Hunt
The Lionesses Are Calling For Equal Access To Football In Schools
By Sophie McEvoy
People Are Calling These Hidden Gems Their Cheapest, Most Clever Finds Of The Year
By Rachel Bar-Gadda
The Best Benzoyl Peroxide Body Washes
By Marissa DeSantis
Get Even More From Bustle — Sign Up For The Newsletter