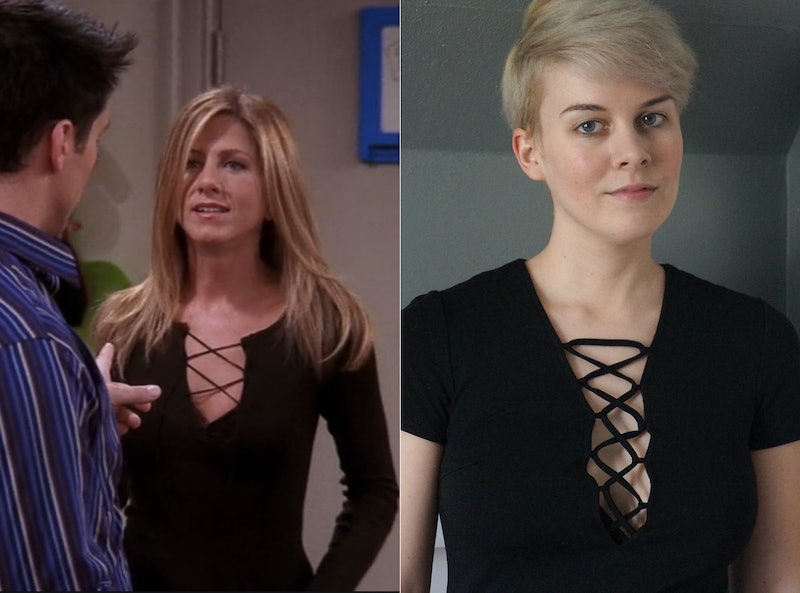 Unlike some other people my age, I'm not a huge Friends fan. I watched it years ago whenever it was on TV, but you won't find me binge-watching it on Netflix. So when I went back to it earlier this week to get some outfit inspiration from Rachel Green, I was surprised to find that she wasn't always the style icon I vaguely remembered her being. She wore some seriously cringeworthy items. Think ugly peasant blouses, cargo pants, platform flip flops, dresses over pants, mom jeans, and a surprising amount of argyle. A lot of it can be chalked up to the style of the time, but still, my eyes started to hurt.

I did notice, however, that Rachel wore a surprising amount of clothes that I happen to have in my closet. For example, she wore a lot of white sneakers, black mini skirts, simple fitted tees, plaid skirts, and various denim pieces (like skirts and jackets). Personally, I feel like Rachel always looked best when she stuck to timeless, classic pieces. Plus it made my job a lot easier, since I had no problem recreating that kind of outfit, even more than a decade after the show's run.

Rachel even managed to make me want to go shopping a few times during this experiment. She looked cute and casual in fitted baseball tees, and she always looked chic and put-together in a sleek grey mini dress or one of her many wrap-dresses of the later seasons. I made a mental note to add these items to my own wardrobe in the future, but for the most part, I managed to recreate her outfits using only clothing I already owned (with one exception, but we'll get to that).

Without any further ado, here is my week of dressing like Rachel Green.

For the first day of this experiment, I decided to ease into it with an outfit that I would normally wear. Rachel wore a white button-down under a black pinafore dress in Season 1, Episode 15.

As far as I could tell, she accessorized this outfit with a black purse and black tights. I couldn't see her feet, but I did notice she wore black knee-high boots a lot during the show's run, so I went with that. Of course, her boots were hideously shiny, and I just can't have scrunchy patent leather boots in my life, so we differed slightly there. I also left out the brown suede jacket that was seen in this episode, because she only wore it for a moment and, um, it was fairly ugly.

I wore this to run errands and do some work at Starbucks, which is sadly the closest thing that my town has to a Central Perk. I felt very put-together in this outfit, and it even made me feel slightly more productive than usual. Thanks, Rachel!

The best part of Day 1, however, happened on my way home. "I'll Be There For You," the Friends theme song, came on the radio. I can't remember ever hearing it come on the radio before, so I took this as a sign that the experiment was meant to be. The universe was sanctioning my decision to dress like Rachel Green for the week. No, the universe was telling me I was Rachel Green for the week.

Emboldened by the sign from the universe, the next day I decided to tackle a Rachel Green outfit that most sane humans would agree only she can pull off. In Season 3, Episode 9, Rachel dresses down for a game of football. Check out how cute she looks in a backwards baseball cap with pigtails, two fitted tees layered to look almost like a baseball tee, oversized sweats, and dorky socks and sneakers. It's all so normcore, and yet she makes it look cute and sexy.

I couldn't replicate the exact outfit, but I did my best to stick to her color scheme: green, black, and white. I borrowed large sweatpants and a baseball cap from my brother. Sadly, pigtails were out of the question unless I wore a wig.

I don't know about this outfit, honestly. It wasn't great for exercising; I went for a run and got extremely sweaty and overheated. I also didn't feel particularly cute. Maybe it's easier to pull off the sexy tomboy thing when you have long hair, but with short hair, I just felt like a boy.

This next outfit was more my speed: all black, put-together, and a little revealing. Rachel wears this chic outfit in Season 4, Episode 14 for some hardcore flirting at work. I'm not sure if this was a dress or a top paired with a skirt; I went with the latter. This was the one time that Rachel made me go shopping; she made me realize I badly needed a black miniskirt in my wardrobe. I found one for only a few dollars at the thrift store, and it even had a bit of a leg slit like hers.

I paired this outfit with sheer hose (Rachel's favorite, and actually kinda sexy) and a choker. Don't ask me where I found a choker in my house in 2016, but I did, and I hated every second of wearing it. I would wear this outfit (minus the choker) on a date in a heartbeat. I don't think I would wear it to work like she did, but maybe that's my fault for wearing a top that's much more low-cut than hers. This outfit got a lot of looks, as you can probably imagine. It was the polar opposite of the previous day.

I took things down a notch for day 4. I was starting to miss my regular wardrobe, so I combined two basic outfits from Season 10, Episode 7 ...

This is a typical Rachel outfit of a striped top paired with a black miniskirt, plus with a denim jacket on top for warmth.

I forgot to wear tights, but I made up for it by adding knee-high boots that Rachel would have been proud of. This was close to what I normally wear, so I felt comfortable all day.

What would this experiment be if I didn't recreate Rachel's schoolgirl outfit from Season 1, Episode 19?

Like any self-respecting '90s girl, I own a plaid miniskirt. I borrowed a white turtleneck and white knee-high socks from my sister, and added clunky black shoes similar to the ones Rachel wore.

I definitely felt like I was playing dress-up in this outfit, and felt uncomfortable when I went out in public. "Sexy schoolgirl" is not a style I'd want to endorse, and I didn't even feel like I pulled it off as well as Rachel did. My mom liked this outfit when she saw it, though. I don't know what to say about that. Maybe she has more nostalgia for my Catholic school days than I do.

This outfit, from Season 10's third episode, is what convinced me I had to do this experiment. These tie-front tops are so popular right now that I just bought one myself a few weeks ago, so I got a kick out of seeing it on Rachel Green.

Mine is actually a dress, whereas hers is a top. I wore it out to a bar that night, and my friend reported that every guy took a good look when I crossed the room. That doesn't usually happen to me, so I attribute it entirely to having criss-crossing threads over my cleavage.

Definitely wear this style if you want a guy to look at your chest. It worked on Joey.

Finally, I reached the end of the experiment. I was so ready to be done, so I picked something comfortable: Rachel's outfit from Season 7, Episode 6.

Rachel wore a lot of long leather jackets — very Matrix style — and I'm sorry to admit that I have one that's very similar. I paired it with a plaid shirt, unbuttoned like hers to show off a black bra, along with another choker necklace and black pants.

Wearing this out and about made me wonder why I own such an outdated jacket. I also wished, for the seventh time this week, that I had Rachel's hair. I think, in the end, to really pull off Rachel Green's style, you simply need to have that hair.

Overall, however, I think Rachel's style can be easily replicated today without looking too outdated or costume-y as long as you pick the timeless elements (black miniskirts, denim jackets, T-shirts and button-downs, plaid skirts, LBDs) over the not-so-timeless pieces (two words: denim bib). So if you're looking for style inspiration, you could look in worse places than Friends episodes. You might find yourself randomly singing "your job's a joke, you're broke, your love life's D.O.A." a little too earnestly for more than a week afterward, though. Don't say I didn't warn you.