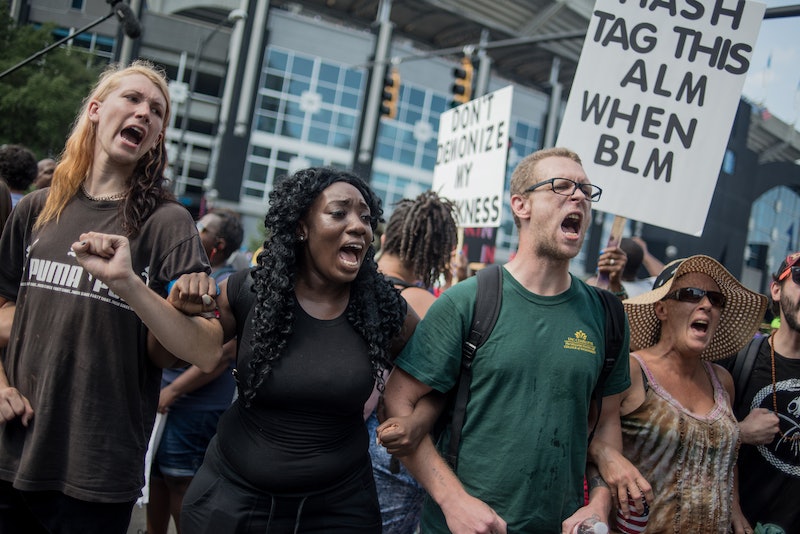 White privilege is like the air we breathe: We don't really know it's around us unless it's unavailable. For those who don't have access to it, it is very real, pervasive, and harmful. White people, however, often need to hear some examples of white privilege in order to understand how they benefit from it and how it hurts others.

As somebody with white privilege myself, I didn't always get it. I thought that the fact that I knew people of color with easier lives than mine meant I didn't have white privilege. However, no matter how easy or difficult a white person's life has been overall, they still have certain things easier than they would have if they were of another race.

If you're a white person who has trouble understanding your privilege, here are some examples proving that it definitely exists. It's not your fault that you benefit from these privileges, but you can still work to help others benefit from them too.

1. Your Wages Aren't Lower Because Of Your Race

Just as there's a gender wage gap, there's also a racial wage gap that stems from our country's history and segregated education and housing systems. According to Bureau of Labor statistics on gender and racial pay inequality, white and Asian men are the highest earners, and black and Hispanic/Latina women are the lowest. The median weekly earnings of a Hispanic/Latina woman are $548, about half of Asian men's $1,080 and 60 percent of white men's $897.

2. People Don't Make Assumptions About Your Intelligence Because Of Your Race

According to a study published in the Journal of Personality and Social Psychology, white people subconsciously associate African Americans with lower intelligence. Another study in the Hispanic Journal of Behavioral Sciences found people hold the same assumptions about Hispanics. Asians often face the opposite stereotype, known as the "model minority myth," which can also be harmful by making it unacceptable for Asian Americans to struggle in school or ask for help and leading people to make assumptions about them that may or may not be true.

3. You Don't Feel Pressure To Represent Your Race

I never have to worry that if I make a mistake, people will assume I've made it because white people are less capable. On the other hand, President Obama makes a few mistakes, and Donald Trump says another black president won't get elected. Being white absolves you from this pressure to defy your race's stereotype so that your mistakes don't hurt others of your race.

4. Most Products Are Geared Toward You

A white person can go into a store to buy Band-Aids, beauty products, and other items related to skin tone and walk out with something that suits them. People of color at best have a small section of products tailored toward them, reminding them that in the eyes of mainstream culture, they are invisible.

5. Most Media Is Geared Toward You

In addition to knowing I can buy products geared toward me, I can feel fairly confident that I will see people like me represented on TV, in movies, in magazines, in books, and all over the Internet. In particular, I am able to see examples of people like me succeeding, which has given me the message that I, too, can succeed. And rather than seeing my culture reduced to a stereotype, I have been shown a wide representation of people of my race.

6. Beauty Standards Aren't Rigged Against You Because Of Your Race

The rigid beauty standards depicted in the media harm all women, and that harm can be due to factors other than race. But at least white women don't usually feel pressure to have lighter skin, differently shaped eyes, or thinner hair on top of everything else. Due to racist beauty standards, one third to one fifth of women in Seoul, South Korea have undergone plastic surgery, largely to make their eyes look more like white people's, and black women get fewer replies on OKCupid than women of any other race.

7. Jobs Won't Discriminate Against You Due To Your Race

In an Auburn University study, researchers sent out identical resumes with white-sounding and black-sounding names to different companies to see who would get interviews. Black applicants got called in for interviews 15.2 percent of the time, while white ones did 18 percent of the time. Some white people might complain that diversity efforts lead people of color to be hired over them, but it actually works the other way around.

8. People Will Trust That You Deserve To Be Where You Are

When a white person joins a company or goes to college or wins an award, people will assume that they deserved it. When a person of color does, people wonder if they were chosen to fill a diversity quota. The reality is that people of color have earned just as many of these opportunities but aren't getting them, which is why diversity efforts are necessary.

9. The Police Are Looking Out For You

Of the 3,000 uses of Tasers in Maryland over three years, 64 percent were used toward black men. And according to The Counted, which tracks deaths of Americans killed by police, Native Americans are killed by police nearly 2.4 times as often as white people. Blacks and Hispanics are also killed more often than whites and Asians. Racial profiling isn't just in people's heads; it's very real, and it means that while white people may feel they can turn to the police for help, people of color are often targeted by the very group meant to protect them.