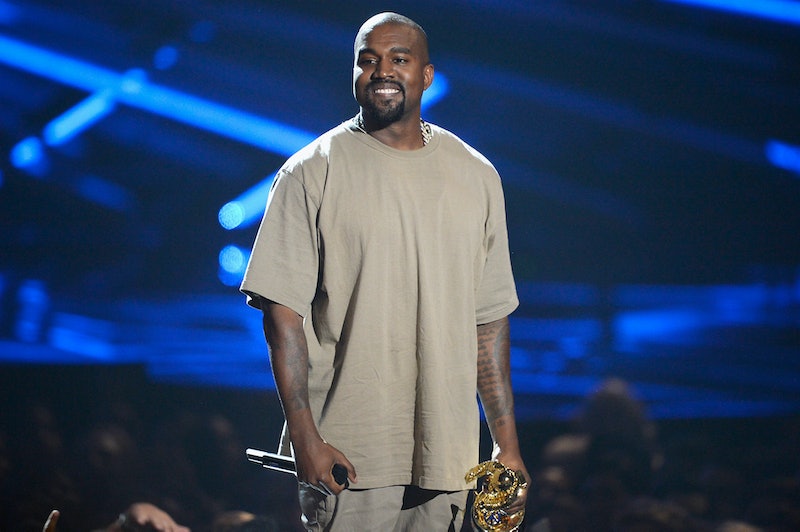 Admittedly, Snapchat is not my preferred social media platform, but Kim Kardashian may have just turned me into a believer. Not because she posted some quick tip makeup tutorial or anything fashion oriented, but because Kardashian snapchatted a video of Kanye West dancing to Justin Bieber's "What Do You Mean?" and it is nothing short of spectacular. I'm not really sure how modern marriages work in the social media age, but if they involve providing ample meme-worthy video footage of your spouse, well then, I'm down.

Per Just Jared, the reality star's Snapchat of West passionately breaking it down was taken at the Justin Bieber concert on March 21. And it's even better than him dancing to the song when it came on the radio, which he has also done on tape.

Now, what does this new vid mean, exactly? Well, a few things. Firstly, it means that I am diagnosing West with a serious case of Bieber fever. Secondly, it means that I hope Kardashian has learned that these video snippets of West in his element are good for the soul. And, thirdly, it means that we have undoubtedly been presented with some A+ meme material.

Think back to when West's Video Music Awards dancing was captured and then remixed to some very surprising but oddly fitting tunes. I'm envisioning this Bieber concert dancing going a similar route, especially because this is not the first outpouring of Bieber love from the rapper. This is the perfect storm of Internet comedic fodder. I mean, check out the video for yourself and think of the possibilities:

Here are some past Kanye memes I hope to see duplicated in some way, shape, or form.

Remember When People Had Him Dance To The Rugrats Theme Song?

I will never tire of this.

Or When They Made Him Dance To The Wiggles

This song, man. This song. Not even West deserves this.

...And The Spice Girls

Everything I never knew I needed.

How About This Dancing Compilation?

You had me at All That.

All Kanyes Aside, Remember What People Did To Drake Once They Were Exposed To His "Hotline Bling" Dancing?!

All I'm asking for here is that this new Kanye video is put to some of Biebs' earlier, less "cool" tunes like "Baby" or "One Less Lonely Girl." That's not too much to ask, is it? Internet, do your thing.