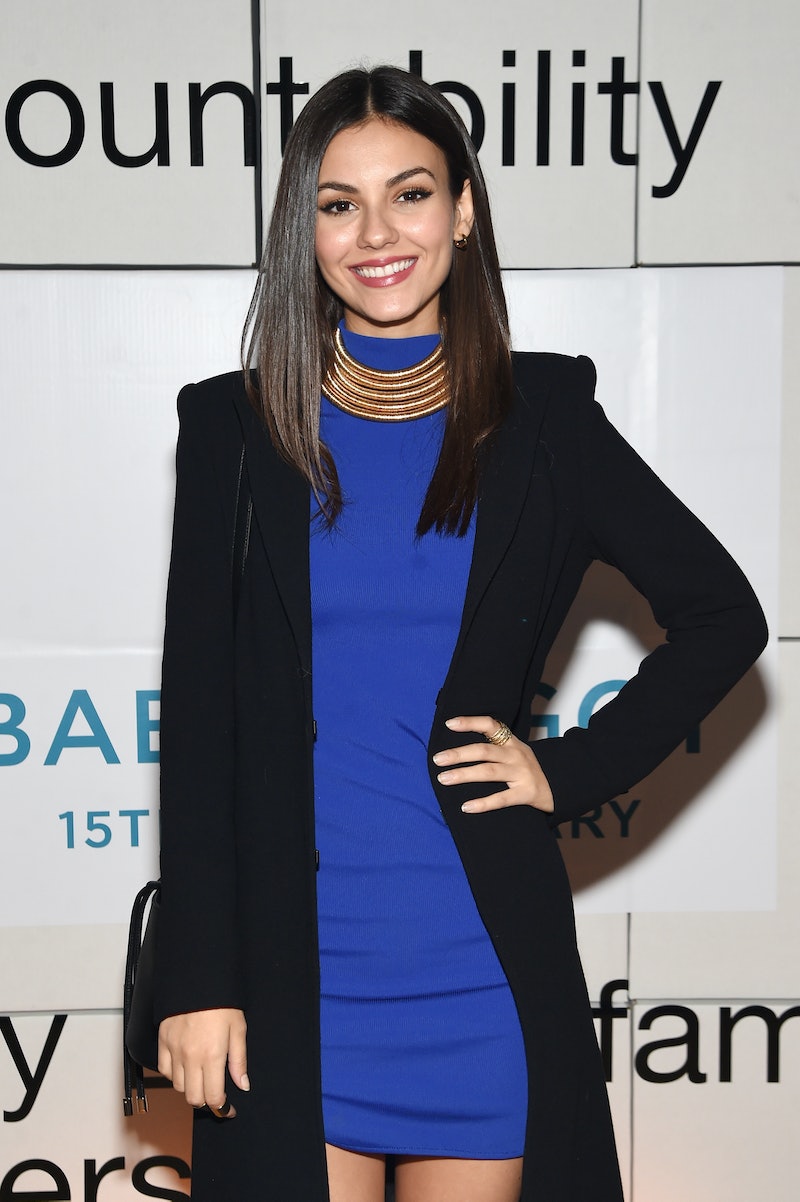 With so many celebrity hair transformations lately, it can be hard to keep up. Now that wigs are just as popular as a permanent color change, it seems like just about everyone is trying out an unconventional 'do. From the looks of her latest Instagram post, Victoria Justice now has blue hair, but is her dye-job real real? Probably not, but it does make quite the statement. Look out, Kylie Jenner, because you're not the only one who can rock blue locks!

After seeing the actress's lovely short blue hair, I'm convinced that she can officially wear anything and look great. Justice posted a photo of herself wearing what appears to be a blue wig, round sunglasses and a puffy winter jacket, looking absolutely fabulous. She seemed to be enjoying her time in Kensington market as she posed in front of a brightly colored wall hanging with her new 'do.

It's not often that Justice changes up her style. She's been a brown haired beauty for a while now, but after seeing the pictures, I'm hoping that she tries some unconventional looks out in the future. There's a good chance that her bright blue bob is just a wig and isn't here to stay for long, so get a good glimpse of it while you can.

Seriously how awesome does she look? Just when you thought no one could rock the color as well as Jenner, Justice comes out of the woodwork to show that she's a blue 'do contender for sure.

She might not be willing to try the most daring hair trends, but she sure does rock some quirky accessories. Here are some of her most unique finds.

It looks like the blue hair wasn't the only thing she found at Kensington Market. These sushi socks are pretty fabulous, I won't lie.

Talk about statement glasses! Justice might have just sported them for Valentine's Day, but they'd be fabulous year-round.

This is another look that Justice was trying out just for the day. Like I said before, she looks good in everything!

Justice made every '90s kid proud by rocking the flip up sunnies that were popular way back when. She's wearing them, so that measn they're back in style, right?

Although it was just for Halloween, this was yet another time that Justice pulled off an unconventional wig with ease.

The fake glasses trend was big in summer 2015, and she showed that she could just right in with the trend.

If this isn't the greatest graphic tee you've ever seen, then I don't know what is.

Clearly Justice can do no wrong when it comes to tiny style changes. Let's just hope she keeps them coming!