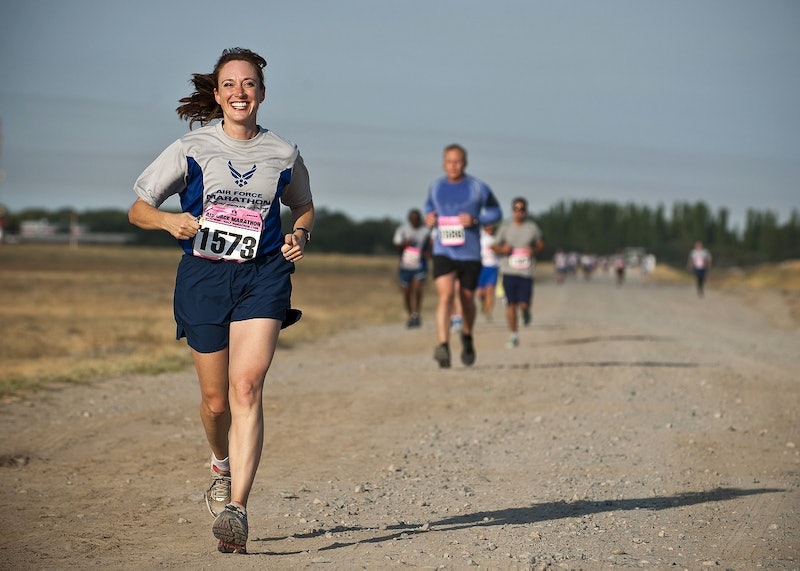 If you’re into working out, likely you’ve been here before — you’ve been so great about getting to the gym regularly and sticking to your promise to stay active, but after a while your workouts seem flat out boring. Luckily, there are weird ways to make exercising genuinely fun that can work to bring the spark back to your fitness routine. The tricks are really simple, too, which makes them all the more appealing.

I always envy my friends who are in love with working out. When I stop to think about what makes their routines so different from my own, I quickly realize these ladies are the ones who rarely do the same types of workouts for weeks or months on end, like I tend to do. They always seem to give off a positive vibe when talking about exercise, where I usually grunt when talking about it as I secretly plot excuses to skip the gym that day.

The need for mixing up how we workout is no myth. EverydayHealth spoke to Gregory Florez, a certified personal trainer in Salt Lake City and spokesman for the American Council on Exercise, who recommended changing something about your workout routine every four to six weeks. This, he said, can help prevent boredom (as well as a weight loss plateau). Basically, it’s a win-win for us all to keep things changing at the gym, or perhaps to try moving things outside of the gym as an alternative. No one likes a boring workout — so why not make things fun again? Here are seven weird ways to make exercising genuinely fun.

1. Revert To Your Childhood

Running around with your friends as a kid never felt like exercising, right? It just felt… fun. An easy way to take away the dread of exercise is to bring it back to your childhood days. According to Health, a great way to bring back the excitement of burning cals is to round up a group of your friends and do something you guys haven’t done since those childhood days. Organize a stickball game at the park on a warm spring day, or — when it hits summer —have a water gun fight, or a sand castle-building contest on the beach. Everyone is bound to have a blast, and you’ll be shaping up while you’re at it.

Speaking of fun and games, have you ever considered gamifying your workout? I spoke to Emmett Williams, the President and co-founder of MYZONE, a wearable training partner that rewards users based on effort, who gave me some tips on turning your workout into a game. He said a great way to do this is by using fitness trackers like MYZONE that allow you to earn points for exercising, turning your workout efforts — whatever they may be — into an instant game.

If you don’t have a tracker, Williams said there are other ways to gamify your workout. For example, “You can also challenge a friend or family member to complete 12 workouts a month or run a certain number of miles per week. If you or your competitor doesn’t meet the goal, they’ll owe the other person something — cooking your favorite meal or doing your least favorite household chore,” Williams said.

Why is gamifying such a great tactic? Williams said, “The benefit of using game mechanics in a ‘non-game,’ — i.e. exercise — is that it will motivate you to get things done and will engage you in the process.”

Even the most torturous of exercise routines can suddenly seem more fun when there’s a prize at the end of it. I’m not encouraging you to workout with a promise of a hot fudge sundae at the end every time, but try to bribe yourself with something that’s enjoyable for you that won’t ruin the hard work you just did. Williams agreed giving yourself small rewards is a good way to help accomplish your workout goals, “Set a few goals, like working out three times a week for three weeks in a row, or sticking to your meal plan for a solid week. Each time you reach a goal, check it off and treat yourself to a small reward.”

Women’s Health also agreed, and suggested after a weekend workout, perhaps scheduling a pedicure on the way home or a night out with your girlfriends after. I'm personally opting for a manicure as today's reward.

4. Take Your Dog Along For The Run

I want to spend every second possible with my dog, so I personally love this idea. If you’re heading out for a run and want to make it a little more exciting, click that leash on your pup and hit the pavement together. Jennipher Walters, a certified personal trainer and co-founder of FitBottomedGirls.com, told Shape, “Dogs are the best workout buddies—they're always excited to go for a run or a walk and just love being active. We should all aspire to live more like them.” (Keep in mind, Walters suggested to Shape that we should consult our vet to see how much exercise the dog can handle so that we don’t overdo it.) What about people who don’t own a dog? Don’t shy away from asking a friend or relative to borrow their furry one to go on a jog with you.

5. Try A Class That Feels Totally Out Of Your Realm

Never thought you’d be into spin? Always assumed a class like Zumba wouldn’t be for you? Sometimes trying exercises that are outside of our typical routine can turn out to be a lot more fun than we ever thought they could be. BodyBuilding.com agrees with this tactic — the outlet suggested signing up for a class at the gym as a means of escaping workout boredom. The outlet noted different classes can offer a fun change in your regular routine.

If you’re in the New York City area, here are some cool and unique workout classes you might consider trying.

Call me early-2000s obsessed, but I seriously can’t get enough of 50 Cent. Recently, I downloaded his The Massacre album, and I’m telling you — it completely changed my workouts for two weeks. I was pumped to the max, and my time at the gym seemed far, far less painful than usual. According to Real Simple, music can improve your performance, particularly if you’re power-walking, running, or lifting weights. Also, the right music can help you coordinate your workout, according to Fabio Comana, a faculty instructor at the National Academy of Sports Medicine, who spoke to Real Simple about the use of music during working out.

It might feel really hard to offer up a genuine smile when you’re powering through a difficult workout, but a fake smile might help all the same. According to the Huffington Post, making yourself smile — even if it’s forced — can make you a little bit happier, and can lower your stress.

If you’re sulking at the mere thought of your workout today, try some of these tricks and you might find exercising is a bit more enjoyable than usual. Before you know it you might be regularly associating working out with “fun” rather than “work.”