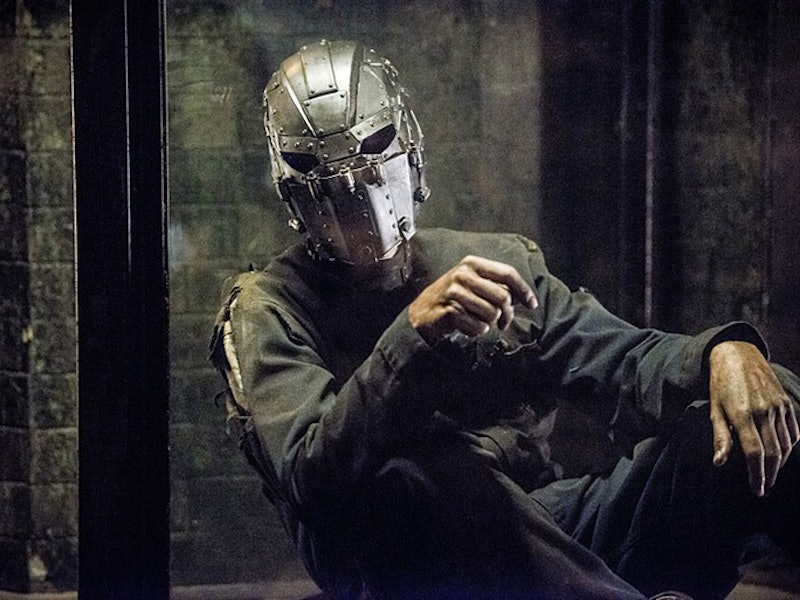 Ever since Barry & Co. went on their brief Season 2 hiatus, I've found myself constantly pondering one of the biggest remaining mysteries on the show: the identity of the Man in the Iron Mask on The Flash . Zoom's prisoner has to be someone important and may very well be the key to bringing this Big Bad down for good. And considering that his face has been purposefully covered, it's safe to assume that his identity is going to be pretty shocking. So I asked myself, who would be the biggest surprise to find under that mask? And, in the end, the answer was simple: Henry Allen. What if Barry's dad, Henry, is the Man in the Iron Mask? In a way, it would actually make a lot of sense.

Now, I can't presume to know which Henry it could end up being: the one from Earth-1 or Earth-2, but considering that Earth-2 Barry's parents are currently in Atlantis for their anniversary, I'm thinking that Earth-1 Henry might be our safest bet. (That is, unless Barry thinks of some other man as his father in this alternate universe.) But for all intents and purposes, let's just stick with the Earth-1 scenario. We have seen Henry for quite some time on the show. In fact, the only time he reappeared after his rather abrupt (and kinda random) departure was back in November 2015. Since then its been radio silence — maybe because he's been a little preoccupied in Zoom's prison cell.

We know that Zoom is desperate to take Barry's speed, so what better way to go about doing that than by taking the one person Barry cares about most in the world? Granted, I don't know why Zoom wouldn't have used him as leverage when he had Barry captive, but I'm sure there's a reasonable explanation for it. (Or not. I can't explain the logic of a psychotic killer!)

Either way, this could help explain why the writers didn't want Henry around all the time after he was released from prison. If we thought he living his own life outside of Central City, then we wouldn't think twice about his absence. Zoom could've easily gotten ahold of him since then before all of the portals were closed off. Plus, it wouldn't be the first time Barry was separated from his dad by a glass barrier....

JUST SAYING! But regardless of who this masked person is, he seems to be one of the good guys. Let's just hope that he doesn't become yet another victim of Zoom's wrath. Given that Central City seems to be a villain magnet in any universe, they need all the good guys they can get.