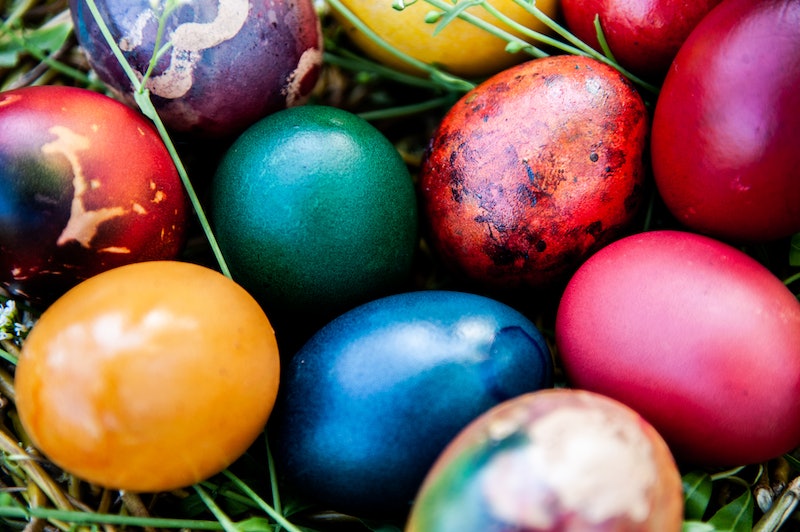 You know it's a religious holiday that involves a big bunny, a lot of chocolate, and Peeps shaped like multicolored rabbits. That's well and good, but as you grow older (or, for when you're around children who have a ton of questions as to how and why the holiday originated), you should probably incorporate a few Easter facts into your vast bank of knowledge. Who knows? Maybe having some facts in the back of your mind will come in handy, especially if there's any lingering tension around the family dinner table this holiday. Y'know, since your brother decided not to go to church that morning, and your mom decided to respond by using the silent treatment. It happens.

First thing's first — Easter is the celebration of the resurrection of Jesus Christ, as well as the celebration of Lent ending. If you don't celebrate Lent, it traditionally starts on Ash Wednesday, and typically includes giving something up. For many, it's a certain type of food. (And just to be clear, we're talking pizza and chocolate, not vegetables or things that you'd rather avoid eating in the first place.)

Unlike other holidays, Easter isn't set on a specific date. Instead, it's set on the first Sunday after the full moon after the vernal equinox, which means that Easter can either fall in the month of March or April. While it falls on March 27 this year, it'll be celebrated on April 16 next year.

Now that you're aware of the history, here are a few facts that are a little more fun.

1. Giving eggs is a tradition that dates back even farther than Easter.

Eggs have been viewed to be symbolic of "new life," so they're extremely popular in the spring. But since Jesus was resurrected, it makes even more sense for eggs to be a proper Easter-related present.

2. Americans buy more than 700 million Peeps during the holiday.

Personally, I can enjoy a Peep year-round. According to David Johnson from InfoPlease, yellow Peeps are the most popular.

3. Half of the United States agree that chickens shouldn't be dyed for Easter.

It sounds like common knowledge, but some people still think that multicolored poultry is festive. While nontoxic dye typically doesn't pose a health risk to baby chicks, it's still a little inhumane.

4. "Easter" was named from the Anglo-Saxon goddess Eostre.

At least, this is what author Bede stated in the book he wrote back in the eighth century. This goddess in particular was known for spring time celebrations and fertility. Some believe that Eostre (also sometimes spelled "Eastre") also had a connection with two other big Easter items — hares and eggs.

5. The white lily is the official flower of Easter.

As they represent grace and purity, many churches and homes have chosen to decorate with the white lily for the holiday. In fact, they're commonly known best as "Easter lilies."

Who knew if Rutherford thought that the egg roll tradition would last so long? The First Family will be celebrating the Monday after Easter this year, for the 138th time. More than 35,000 people are expected to show up, and the theme is set to be "Let's Celebrate!"

7. Back in the day, pretzels were often used to celebrate Easter.

Why, might you ask? Well, envision a big soft pretzel. The twists can be seen as arms crossing in prayer. In fact, back in the day, there were pretzel hunts instead of egg hunts. Some even believe that pretzels were invented with Lent in mind, as they could be baked without the use of animal parts.

8. It's estimated that Americans spend $131, on average, every Easter.

Between the candy, dinner, and decor, that's a big chunk of change. And such a weird figure, too — hopefully that "1" in "131" is allotted for peanut butter eggs.

Peeps may be the star of your Easter basket, but they're not the only candy that gets a boost on Easter. While a few of them get accidentally tossed while hiding in plastic Easter grass, a majority of them are consumed by adults and children across America. William Schrafft invented the jellybean back in the late 1800s, and his original goal was to send them overseas to our soldiers. He probably had no idea that they'd one day become almost synonymous with "Easter candy."

10. Easter is the oldest, and most important, Christian holiday.

You might assume it's Christmas, but it's actually Easter. To understand its impact, keep in mind that very early Christians celebrated the resurrection of Jesus Christ every single Sunday, until they decided to dedicate a full, annual day to him. Even though Easter started as a pagan holiday, Christians adopted it, and many who celebrate don't pay any mind to the pagan aspects of it (like, for example, the Easter bunny). Many believe that Easter is the backbone of Christianity, which is incredibly thought-provoking.

More like this
10 Pumpkin Recipes That Are Way More Creative Than Pie & Lattes
By Rebecca Deczynski and Alexis Morillo
Bennifer, Kravis, & 14 Other Fun Celeb Couples Halloween Costume Ideas
By Emma Carey and Brittany Leitner
7 Symbolic Meanings Of Autumn — From Letting Go To Self Preservation
By Kirsten Nunez
6 'Game Of Thrones' Halloween Costumes That Aren't Overdone
By Nina Kahn
Get Even More From Bustle — Sign Up For The Newsletter