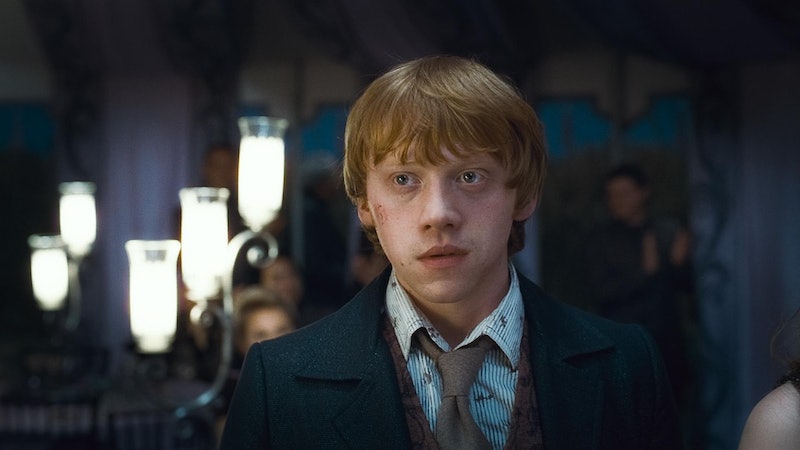 I love the Harry Potter films, but I think one character in particular got the short end of the stick when his character made the transition from book to movie: Ron Weasley. While Rupert Grint did an excellent job in his portrayal, I sometimes felt that the movie version of Ron Weasley didn't perfectly match the book version.

Or at least, we sometimes overlook his best moments, even in the films. In the book, Ron was Harry’s partner in crime. He always had a hilarious quip, and sure, he loved food, but he was so much more than just a sidekick or comic relief. He stood by Harry’s side through quite a lot. Even though he was constantly overshadowed by his best friends and his family, he stayed loyal and became a hero in his own right. Also, he’s really, really witty. Not just silly "ha-ha he’s afraid of spiders" funny. Ron Weasley could have been a Muggle improv comedian, because he comes up with hilarious retorts 24/7.

The truth is, though Harry was the protagonist of the series, he never could have accomplished anything had it not been for a LOT of people — including Ron Weasley. The Harry Potter series is really an ensemble adventure, and Ron is right there in the midst of the action.

The car disappeared from view with one last snort from its exhaust.

“Can you believe our luck?” said Ron miserably, bending down to pick up Scabbers. “Of all the trees we could’ve hit, we had to get one that hits back.”

"Don't let the Muggles get you down!"

—Ron Weasley, Harry Potter and the Prisoner of Azkaban

"Did you really blow up your aunt, Harry?" said Hermione in a very serious voice.

"I didn't mean to," said Harry, while Ron roared with laughter. "I just -- lost control."

"So am I," admitted Harry. "Forget expelled, I thought I was going to be arrested." He looked at Ron. "Your dad doesn't know why Fudge let me off, does he?"

"Probably 'cause it's you, isn't it?" shrugged Ron, still chuckling. "Famous Harry Potter and all that. I'd hate to see what the Ministry'd do to me if I blew up an aunt. Mind you, they'd have to dig me up first, because Mum would've killed me."

"I've still got ten Galleons," [Hermione] said, checking her purse. "It's my birthday in September, and Mum and Dad gave me some money to get myself an early birthday present."

"How about a nice book? said Ron innocently.

"Farewell!" cried the knight, popping his head into a painting of some sinister-looking monks. "Farewell, my comrades-in-arms! If ever you have need of noble heart and steely sinew, call upon Sir Cadogan!"

"Yeah, we'll call you," muttered Ron as the knight disappeared, "if we ever need someone mental."

"No," said Hermione shortly. "Have either of you seen my copy of Numerology and Gramatica?"

"Oh, yeah, I borrowed it for a bit of bedtime reading," said Ron, but very quietly.

“Don’t talk to me,” Ron said quietly to Harry and Hermione as they sat down at the Gryffindor table a few minutes later, surrounded by excited talk on all sides about what had just happened.

“Why not?” said Hermione in surprise.

“Because I want to fix that in my memory forever,” said Ron, his eyes closed and an uplifted expression on his face.

“Percy wouldn’t recognize a joke if it danced naked in front of him wearing Dobby’s tea cozy.”

—Ron Weasley, Harry Potter and the Goblet of Fire

“And from now on, I don’t care if my tea leaves spell die, Ron, die — I’m just chucking them in the bin where they belong.”

“Well, we were always going to fail that one,” said Ron gloomily as they ascended the marble staircase. He had just made Harry feel rather better by telling him how he told the examiner in detail about the ugly man with a wart on his nose in his crystal ball, only to look up and realize he had been describing his examiner’s reflection.

“Yeah, right, because Malfoy won’t abuse it at all,” said Ron sarcastically. “So you’re going to descend to his level?” “No, I’m just going to make sure I get his mates before he gets mine.”

“Well, obviously, she's feeling very sad, because of Cedric dying. Then I expect she's feeling confused because she liked Cedric and now she likes Harry, and she can't work out who she likes best. Then she'll be feeling guilty, thinking it's an insult to Cedric's memory to be kissing Harry at all, and she'll be worrying about what everyone else might say about her if she starts going out with Harry. And she probably can't work out what her feelings towards Harry are anyway, because he was the one who was with Cedric when Cedric died, so that's all very mixed up and painful. Oh, and she's afraid she's going to be thrown off the Ravenclaw Quidditch team because she's flying so badly."

A slightly stunned silence greeted the end of this speech, then Ron said, "One person can't feel all that at once, they'd explode.”

“Okay, write that down,” Hermione said to Ron, pushing his essay and a sheet covered in her own writing back to Ron, “and then copy out this conclusion that I’ve written for you.”

“Hermione, you are honestly the most wonderful person I’ve ever met,” said Ron weakly, “and if I’m ever rude to you again —”

Harry took a deep breath and continued calmly, though his insides were boiling, “Yeah, ghosts are transparent, but Inferi are dead bodies, aren’t they? So they’d be solid —”

“A five-year-old could have told us as much,” sneered Snape. “The Inferius is a corpse that has been reanimated by a Dark wizard’s spells. It is not alive, it is merely used like a puppet to do the wizard’s bidding. A ghost, as I trust that you are all aware by now, is the imprint of a departed soul left upon the earth . . . and of course, as Potter so wisely tells us, transparent.”

“Well, what Harry said is the most useful if we’re trying to tell them apart!” said Ron. “When we come face-to-face with one down a dark alley, we’re going to be having a shufti to see if it’s solid, aren’t we, we’re not going to be asking, ‘Excuse me, are you the imprint of a departed soul?’ ”

“What are you doing with all those books anyway?” Ron asked, limping back to his bed.

“Just trying to decide which ones to take with us,” said Hermione. “When we’re looking for the Horcruxes.”

“Oh, of course,” said Ron, clapping a hand to his forehead. “I forgot we’ll be hunting down Voldemort in a mobile library.”

Hermione looked across the lake to the far bank where the dragon was still drinking. “What’ll happen to it, do you think?” she asked, “Will it be alright?”

“You sound like Hagrid,” said Ron, “It’s a dragon, Hermione, it can look after itself. It’s us we need to worry about.” “What do you mean?”

“Well I don’t know how to break this to you,” said Ron, “but I think they might have noticed we broke into Gringotts.”

“Hang on a moment!” said Ron sharply. “We’ve forgotten someone!”

“The house-elves, they’ll all be down in the kitchen, won’t they?”

“You mean we ought to get them fighting?” asked Harry.

“No,” said Ron seriously, “I mean we should tell them to get out. We don’t want anymore Dobbies, do we? We can’t order them to die for us."

Harry put Hagrid’s pouch back around his neck, pulled on a final sweater, stooped to pick up Hermione’s wand, and faced Ron again. “How come you’re here?”

Apparently Ron had hoped that this point would come up later, if at all. “Well, I’ve—you know—I’ve come back. If—” He cleared his throat. “You know. You still want me.”

There was a pause, in which the subject of Ron’s departure seemed to rise like a wall between them. Yet he was here. He had returned. He had just saved Harry’s life.

“Why are they staring?” demanded Albus as he and Rose craned around to look at the other students.