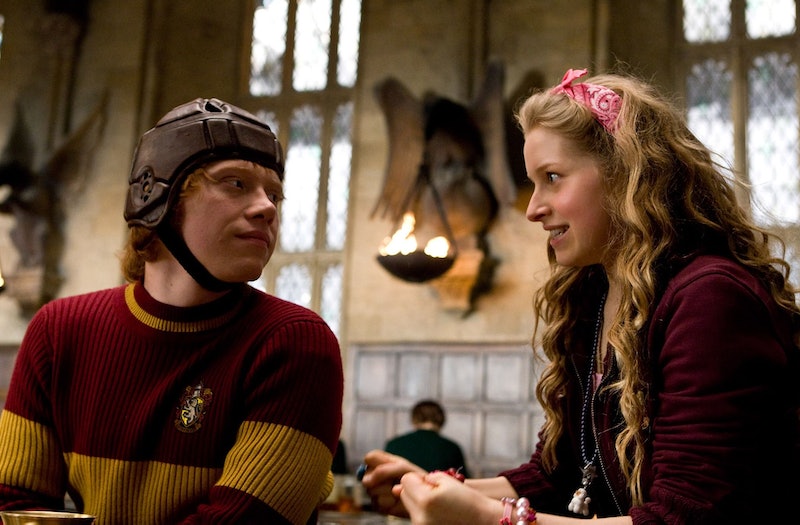 I am a reasonable woman, and even I can admit when sometimes I'm being a little too harsh. I took a red pen to the beloved Harry Potter series when I wrote about characters I thought were overrated, and it wasn't until after I published that article that I realized I wasn't being fair. I absolutely love the entire Harry Potter universe, so how could I write about the overrated characters without considering those that might also be underrated? It's only fair that I do.

We all know that without Hermione Granger, Voldemort would have taken over England by the end of book one, that Luna Lovegood teaches so many awesome lessons, and even that Neville Longbottom is The Boy Who is Secretly the Best Ever, but what about other characters that don't get the same credit? One of the best things about the characters that inhabit Harry Potter's world is the fact that these characters are human, and for every time you realize that Sirius is actually a jerk, you can also realize that other "blah" characters might have a good side.

I've compiled a list of the diamonds in the rough throughout Harry Potter. Be they underrated, under-represented, or simply misunderstood, these it's time for these dogs to have their day!

Yes, Lavender Brown ended up being a stage-five clinger when it came to her relationship with Ron Weasley, and her treatment of Hermione was less than stellar, but Lavender makes this list solely because she is such a teenage girl. When the main characters are often being serious somewhere (and rightly so), Lavender is busy having crushes on handsome centaurs, loving Divination, her favorite subject, and obsessively deconstructing her relationship with Ron. This was a person who could have easily crushed on Harry Potter himself, but instead saw the diamond in the rough that Ron was. Part of Dumbledore's Army and the first Gryffindor sorted in Harry's year, Lavender was able to rise above being unceremoniously dumped by her boyfriend to stand with him at the Battle of Hogwarts, where she lost her life.

I know that some will argue that Lupin deserves to be on another list, but I've been a Remus Lupin supporter for most of my adult life, and have no plans of stopping. Sure, he was an enabler to Sirius and James' bullying behavior, and his angst over his werewolf status made his relatively short (and ultimately tragic) marriage with Tonks a lot rockier than it had to be, but Lupin was a man who carried chocolate around just in case people need cheering up. Lupin was still the best Defense Against the Dark Arts teacher that existed during Harry time at Hogwarts. Often overshadowed by the flashier Marauders, Lupin's arc was a fantastically tragic one, and he deserves far more play than he gets.

It's not as though Fleur is hated by fans, but she doesn't seem to be very beloved either. This is a shame, because Fleur Delacour actually rocks pretty hard. As one of the champions of the Triwizard Tournament, this meant that she was the best student from Beauxbatons. She's more than just an academic whiz, however, she's absolutely one of the most loyal characters in the entire series. When Harry saved her little sister Gabrielle in the second task, he gained her favor for life, and she stuck by that. When Bill Weasley was mauled by Fenrir Greyback, did Fleur care that he was no longer handsome? Absolutely not, and she'd fight you for saying so. Only weeks before her own wedding she risked her life by disguising herself as Harry to fool Death Eaters. She's fearless, she's fierce, and definitely deserves more appreciation than she gets.

Dean Thomas carries the distinction of being the ex-boyfriend of Harry's future wife, but he's so much more than that. Gifted with his own rich backstory, his appearance in Deathly Hallows is a sobering moment for Harry. Unable to prove his own Wizard pedigree, Dean went on the run at the age of 17 in order to not end up in Azkaban. Dean defended Lupin to Umbridge, became a member of Dumbledore's Army, and veteran of the Battle of Hogwarts, he also correctly guessed one of the secrets about The Chamber of Secrets. Had Hermione even gotten that far yet?

Ginny Weasley is the rare character from the series that is actually actively underrated even within the series itself. Constantly discounted by Ron and Harry for her first four years in Hogwarts, they are the last to realize how truly talented she is. She survived being possessed by a Horcrux when she was only 12 years old, joined Dumbledore's Army (everyone in the DA could be on this list, honestly) and when the Golden Trio were off looking for Horcruxes, she teamed up with Neville and Luna to reinstate the DA. Brave? Heck yeah she is. Smart? Absolutely. While she ends up married to one of my eight most overrated characters, Ginny is more than just the youngest of the Weasley family, she's a terrific witch in her own right.

Ernie is one of those characters that had a much larger part in the books than he did in the films, hence his special .gif up there. We watched Hufflepuff Ernie grow up alongside Harry and the others, and while he was a little bit pompous most of the the time, his sense of friendship was ironclad. Sure, in The Chamber of Secrets he not only believes that Harry is a dark wizard (even though he's 12, seriously where did they think he learned this dark magic!?) but rather annoyingly brags about his pedigree in order to keep from getting attacked. He sobers up quickly when Hermione becomes a victim, knowing that Harry's love for his friend proves his innocence. Ernie is special in my opinion due to the fact that he has no ties of friendship to Harry and yet still stands up and works towards doing the right thing by joining Dumbledore's Army, fighting in the Battle of Hogwarts.

Tonks is mostly underrated due to the fact that she is one of the most fascinating characters in the entire series. The only Metamorphmagus we meet during the course of the story, Tonk's ability to transform her appearance is exceedingly rare in the wizarding world, something she used to help her become an Auror at the relatively young age of 25. As a protégé of Mad Eye Moody, I feel like their shared backstory as dark wizard-hunting buddy cop duo would make a terrific story on its own. Tonks' story mostly went on in the background: her love for Lupin, the tension between her and her aunt Bellatrix LeStrange, and she died too soon. Tonks deserves so much more attention and love than she gets, even if she already gets a fair amount.

Hear me out! I know that Draco Malfoy is a polarizing figure in the fandom, with half thinking that he's a racist piece of trash, and the other half thinking that he's a poor misunderstood puppy who looks good in leather pants. I believe neither of these things... within reason of course. Draco is a complete jerk, this is true, but as time goes on he does grow, and that's pretty impressive for a person who grew up being told that he was part of a master race. Am I saying that Draco Malfoy is a secret hero? No. Am I saying that he was a human being who slowly moved to shed the prejudice he was raised in? Absolutely, and I think that deserves a little bit of credit.

Plus, he also inspired one of the greatest interpretations of any character ever, thanks to A Very Potter Musical.