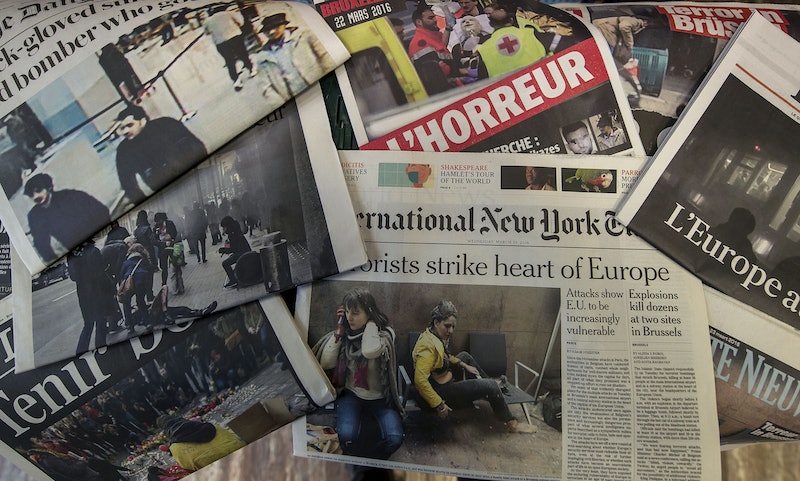 Update: On Wednesday, Belgium officials confirmed that Najim has not been arrested and is still on the run.

Earlier: On Wednesday morning, the third suspect in the Brussels bombings, Najim Laachraoui was arrested in Anderlecht, a nearby municipality, according to Belgian newspaper La Dernière Heure. So far, no updates have been reported on when the suspect's trial will begin.

According to Belgian authorities, the 25-year-old had been on Belgium's wanted list since they interviewed Salah Abdeslam, his alleged accomplice and last standing Paris attacker, was captured on Friday during a police raid in Molenbeek. Molenbeek Mayor Francoise Schepmans told The Associated Press that she suspected Abdeslam had co-conspirators, but that Brussels would have to wait to find them.

Probably he had contacts with other men to help him. But we have to wait. What's important now is that Salah Abdeslam has been arrested.

The manhunt for Laachraoui began on Monday. Belgian federal prosecutor Frederic Van Leeuw admitted that there are still some unanswered questions in the investigation.

We have a certain number of pieces of the puzzle, and some pieces have found their place, but we're far from having completed the puzzle.

One day later, Laachraoui helped to carry out the bombings that killed at least 34 people in the Zaventem airport and Maelbeek metro station. Unfortunately, this wasn't the first attack he helped facilitate.

Like Paris attack mastermind Abdelhamid Abaaoud, Laachraoui had travelled to Syria to allegedly join ISIS' ranks in 2013. Previously, he had studied electromechanical engineering at the Catholic high school Institut de la Sainte-Famille d'Helmet in Schaerbeek, and based on DNA evidence, is believed to have constructed the bombs used in the Brussels bombings and possibly in the Paris attacks. The connection between Laachraoui and the Paris attacks became clear after Belgian authorities discovered his DNA, along with traces of TATP, which was used inside of the Paris attackers' suicide bomb vests. The weekend prior to the Brussels bombings, the DNA was found in two apartments known to have been rented out by ISIS members who contributed to the Paris attacks. Van Leeuw released a statement about the findings.

The searches that took place in the Schaerbeek (district) found an explosive device containing among other things nails. Investigators also discovered chemicals and a flag of the Islamic State.

Authorities believe that Laachraoui made at least one bomb used in the Paris attacks in the house located in the Schaerbeek district. Authorities fear that he could be the mastermind behind the Brussels bombings, but was caught just a day too late. On Saturday, Belgian authorities officially charged Laachraoui's accomplice, Abdeslam, with "participation in terrorist murder" and it's possible that the potential bomb maker will be charged similarly.