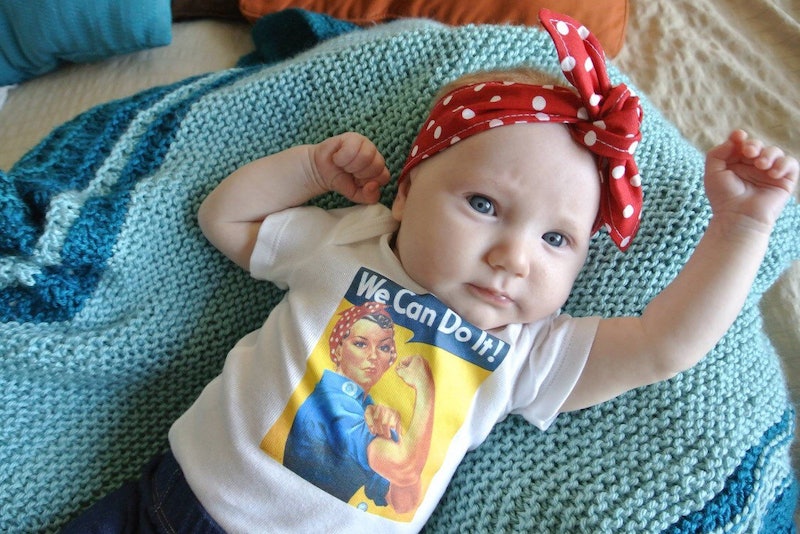 We're going completely nuts over every aspect of Women's History Month, and that includes honoring the awesome ladies who will inspire the newest generation of feminists. And I do mean newest. As in "just out of the womb and not yet aware of anything except breasts and the annoyance of people cuddling you." If you've just had a baby, are currently incubating one, or would at one point quite like to have some small rugrat running around underfoot, you can give them a taste of a feminist legacy with a name that calls back to some of the most inspirational women in history — whether it's activists, educators, or pure ass-kickers. But first, you're going to need some feminist baby name ideas.

And note that when I say "baby," I do include pets in that equation. Your resident mutt may not necessarily have the potential to grow up to be president or take down misogyny with a well-timed speech to their peers, but they can be part of the legacy too, and it'd be seriously unfair to deprive any child-free people of the chance to honor their feminist heroes. Hell, name your favorite lizards Elizabeth, Cady, and Stanton. Refer to your car affectionately as "Simone" after Simone de Beauvoir or Miss Nina. I'll support you.

So here are 15 feminist baby names designed to inspire the next generation of freedom fighters. Yes, that small fist they're making in their tiny bundle definitely means "Justice for Women Now."

Named After: Ida B. Wells, the amazing anti-lynching activist, journalist, and daughter of slaves who became a pioneering figure in the black civil rights movement. Seriously, if you don't know Wells' story, go read up on her immediately. She'll make you (and your kid) want to go raging for justice the entire length of the country.

Named After: Kimberlé Williams Crenshaw, the academic and civil rights activist who introduced the concept of "intersectionality" to feminism, broadening its focus to include the concept of overlapping minority identities in interaction with gender and discrimination.

Named After: Andrea Dworkin, the radical feminist and powerful speaker who polarized society with her assertion that pornography is anti-feminist, and who wrote some of the most seminal texts in the history of feminist thought, including Woman Hating.

Named After: Rosie the Riveter, who wasn't originally intended to be a symbol of women's rights (or, indeed, released for public consumption), but became an iconic image of women's capability and strength from World War II to the modern day.

Named After: Betty Freidan, one of the most famous feminists in history, author of The Feminine Mystique as an expression of her anger and dissatisfaction about women's roles in society, and co-founder of NOW, the National Organization for Women, and NARAL, the National Association for the Repeal of Abortion Laws.

Named After: Gloria Steinem, in case you even have to ask. An icon of '70s American feminism, Steinem's political activism, writing, journalism, and organizational legacy, from NOW to Ms. Magazine (now the Ms Foundation), have been some of most powerful contributions to women's rights in American history.

Named After: Coretta Scott King, possibly best-known to you as Martin Luther King, Jr.'s wife, but also a hugely influential feminist and peace activist in her own right, founding the Center for Nonviolent Change, chairing NOW meetings in Georgia, and working as an activist for disarmament, women's equality, and civil rights worldwide until her death.

Named After: The youngest entry on this list, the now-famous Malala Yousafzai, who survived a bullet through the head in 2012 by the Taliban (as a reward for the crime of publicly seeking education as a girl in Pakistan), and became an international feminist symbol and campaigner for the women's right to education and equality.

Named After: Mary Wollstonecraft was a hugely prominent feminist thinker thanks to her inspirational rage against oppression, A Vindication of the Rights of Women. Not satisfied? Change it to Marie and name her after the formidable intellectual heavyweight Marie Curie, who won two Nobel Prizes.

Named After: Got a blooming young genius in the making? Name her after Marjorie Lee Browne, one of the first African American women to earn a doctorate in mathematics, way back in 1949. If that doesn't appeal, you could go for Euphemia Haynes, who holds the title for the very first in that category, and was also a lifelong fighter against segregation in education.

Named After: There are actually two precedents for this. One is Octavia the Younger, the sister of Emperor Augustus who's most remembered now for being abandoned by her husband Marc Antony for Cleopatra, but who was actually a shrewd political operator who was highly respected by her male contemporaries. The other is Octavia Butler, the celebrated African American science fiction writer who's renowned for her hugely feminist narratives. Pick your hero.

Named After: Brigitte Kwan, occasionally called "China's first feminist" for her activism against foot binding as a barbaric and harmful practice (she apparently had to swim to help many crippled women escape during a flood).

Named After: Arete of Cyrene, an ancient Greek philosopher whose work, alas, does not survive, but whose reputation as a teacher has lasted over the centuries. She was taught by a pupil of Socrates, and various sources attest that she was a seriously powerful intellectual force. Runners up in this category include Sappho, the hugely influential Greek poet, and Hypatia, the mathematician and astronomer.

Named After: Nellie Bly, the amazing undercover journalist who did things like pretend to be mentally ill to gain access to the living conditions of asylums in America and going around the world in 72 days. Disappointingly, her middle name wasn't "fearless" (it was Jane), but as a pioneer of female journalism, she definitely would have earned it.

Named After: Dolores Huerta, legendary badass. Huerta has spent her life fighting for the rights of workers, women, and children, including aiding in the formation of the United Farm Workers association. Did you want to name your girl after somebody who's had the Eleanor Roosevelt Award for Human Rights AND a Presidential Medal of Freedom? Yep, thought so.