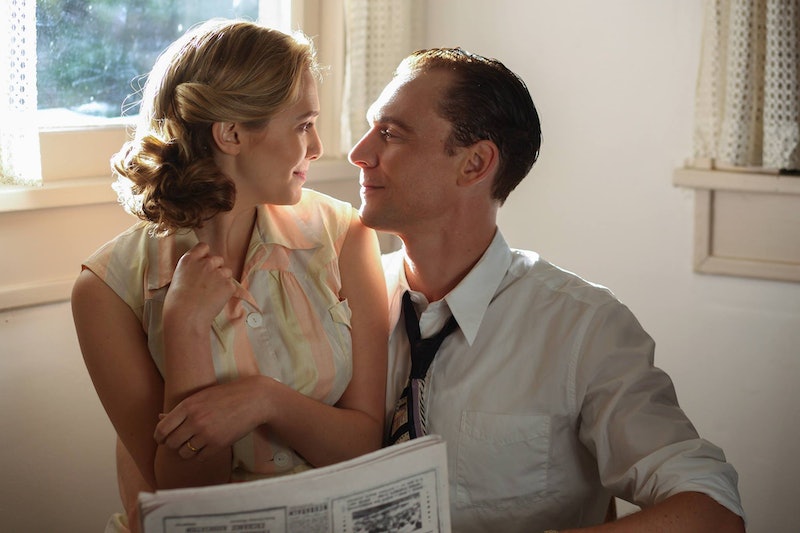 In a post-Avengers world, the name Tom Hiddleston is pretty much synonymous with the phrase "hot Brit." The English actor may be best known for playing an alien from another planet, but it's really his signature sexy accent that makes him a fan favorite — his dedicated fans even call themselves Hiddlestoners. So you can see why his casting as Hank Williams, the legendary crooner who set the tone for country music in the late 1940s, in I Saw The Light, caused some to scratch their heads. Hiddleston isn't Southern, he's not a country singer, and, well, he's British. Does he even look like Hank Williams? Well, compare some photos of Tom Hiddleston and Hank Williams to decide for yourself.

Hank Williams III, Williams' grandson and a country singer in his own right, wrote a lengthy Facebook post in June of 2014 about why he thought Hiddleston wasn't right for the part. His biggest issue was that he thought his grandfather needed to be played by an "American From The South". He didn't, however, comment on any physical similarities (or dissimilarities) between Hiddleston and Williams. Maybe that's because, just looking at the two side by side, the resemblance is pretty evident. Are they identical? No, but they are both lanky, tall, with striking profiles and a dangerously charming smile. Don't believe me? Let's take a look at Hiddleston vs. Williams.

And this is Hiddleston:

Note the strong nose, brow, and a smirk that can only be described as incredibly attractive and slightly evil.

Here's a side-by-side for better comparison:

In his Williams costume, complete with an expertly tipped cowboy hat, Hiddleston looks more and more like the country star. Let's look at another photo of Hiddleston in character as Williams.

And another of Williams:

OK, so it's a tough comparison to make, what with the limited photos of Williams, and the black-and-whiteness of it all. But, at the end of the day, who would expect two men living half a century apart to look exactly the same? And does an actor really need to look like the person he's playing in a biopic? Even Hank Williams III couldn't come up with an actor that looked more like his grandfather. His ideal pick to play Williams in I Saw The Light was Matthew McConaughey on the grounds that "he has played many roles as a Southern man." Hiddleston might not have played many Southerners before, but he sure looks the part to me.

More like this
Inside The Wild, Contrived World of Staged Paparazzi Photos
By Tess Garcia
Khloé Kardashian Is Done With Tristan Thompson For Good
By Jake Viswanath
Britney Spears Shared More BTS Photos & Video From Her “Fairytale” Wedding
By Brad Witter
‘Bridgerton’ Stars Nicola Coughlan & Luke Newton Got Polin Fans In A Tizzy
By Stephanie Topacio Long
Get Even More From Bustle — Sign Up For The Newsletter