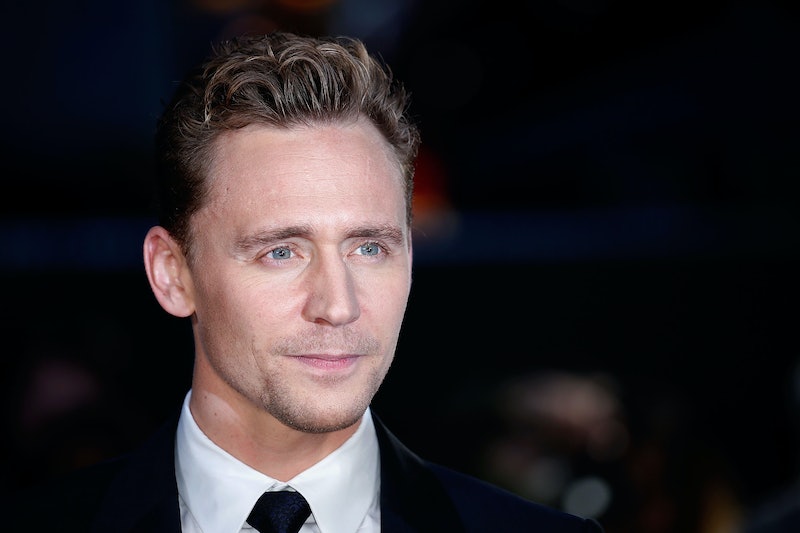 Tom Hiddleston is a fantastic actor, and he's having a moment in the sun with his new Hank Williams biopic I Saw The Light coming up, and his role as the sexy and evil Thomas in Guillermo del Toro's gothic horror flick Crimson Peak. His fans are also having a moment. Because if you didn't know, the 34-year old British actor has an army of fans, and many call themselves with pride: Hiddlestoners. And with the news that Tom Tom's nude derriere is on full display in Crimson Peak, the Hiddlestoning has reached peak freneticism. That's right y'all: he's in a gothic horror movie sex scene, and you can see his butt.

Obviously at a time like this, Hiddlestoners are losing their minds. They are highly dedicated to their man. If you don't know about the phenomenon of Hiddlestoners, it can be overwhelming, but basically, it's like any of your typical fandoms, but intensified ten times over: fan art, meticulous watching and gif-ing of any interview he does, confessing Tom Hiddleston-related sexual frustration... it can get a little weird. But hey, can you really blame Hiddleston's Army/ Loki's Army/Hiddlestoners? Like I said before, he's so dang charming, and that's coming from someone who has never understood fandom. So while Tom Hiddleston is only gonna continue to shine, here are some healthy tips on how to be a Hiddlestoner, or just a fan, without letting it ruin your life:

I know this seems like a no-brainer, but please... leave the guy alone. No need to break down his door, Google his address (just avoid that), or follow him around town to his filmings, etc. If there is a movie premiere, and you get a chance to go, that's totally cool! But please don't actually jump on his physical person, like when fans mobbed Hiddleston physically outside his play, Coriolanus, last winter at the Donmar theater in London. They had to bring in extra security! You don't want to be the reason Hiddles needs more bodyguards, do you? That's not a good look.

2. Do: Watch All His Movies

Duh! Hiddleston has so many good flicks on his resume, and the best way to indulge in some Tom love is to look to his art. Yes, he is SO charming in real life: well-spoken, self-aware, appreciative of his fans. But it's his acting that really makes him amazing. If you're a diehard fan, I'm sure you saw Crimson Peak the second it released last week, and have probably watched every Avengers movie with Loki til your eyeballs burnt out. But there's also War Horse, Only Lovers Left Alive, his role as F. Scott Fitzgerald in Midnight In Paris, and his older, more British roles, like the movie The Life And Adventures of Nicholas Nickleby, in which he played a small role as "Lord." SO British, Tom.

3. Don't: Be Creepy About His Body

I know that Tom Hiddleston is a cutie, but there's no reason to get so creepy about it, like obsessing over his backside in Crimson Peak . The movie is so much more than that one scene, and reducing his acting to how much skin he shows is an insult to us all. You can admire his good looks, but don't be gross, OK?

4. Do: Watch His Interviews

Let's face it: the man is charming as hell: that accent, that voice, that cute self-awareness. He's the kind of celebrity that gives a great, adorable and personal interview that are fun to watch even if you're not a "Hiddlestoner." He's great on his press tours, and equally great on late-night TV. Just this week Hiddles was on The Late Show With Stephen Colbert, talking about his butt, and on The Daily Show With Trevor Noah, in which the new host from South Africa admitted that he, too, is a Hiddlestoner.

5. Don't: Get Down On Yourself Because You Can't Have Him

Well, I have reached what seems like peak sadness on the internet: Anonymous confessions from people on Tumblr that love Tom Hiddleston and are letting that love ruin their lives. It's bleak. Some anon fans write on the Tumblr account "Tom Hiddleston Ruins Everything" that their love and passion for Tom and the fact that they can't be with him is ruining their life, asking for advice or sharing experiences about contacting him and professing their love. Love yourselves better, fans., You can find real love in this world. But I hate to break it you: you're probably never going to have Tom.

Putting energy into a creative outlet is always a good thing! You can join the thousands of artistically inclined, expressive fans on Tumblr that have been making Hiddleston paintings, drawings, illustrations, GIFS, comics, embroideries, shirts — just about anything you can think of — to share your own personal appreciation for Hiddleston in all his roles.

Though she recently denied them, there have been rumors swirling since May that Hiddleston and Elizabeth Olsen were dating, and naturally, it was upsetting to fans. But unfortunately people, one of the worst things you can do to show your fandom is to insult a woman who you don't even know just because she is (maybe) dating an actor that you are obsessed with. Yes, if they are dating, she's very lucky! Please leave her well alone even if their (possible) love is tearing you apart!

8. Do: Get Excited About His Projects

A healthy fandom is good! Passion is good! Just don't let it get out of hand, Hiddlestoners — or at least try to keep it safe. That being said, I haven't seen Crimson Peak yet, so who knows? Maybe there's a real reason that the Hiddleston madness is reaching peak levels.