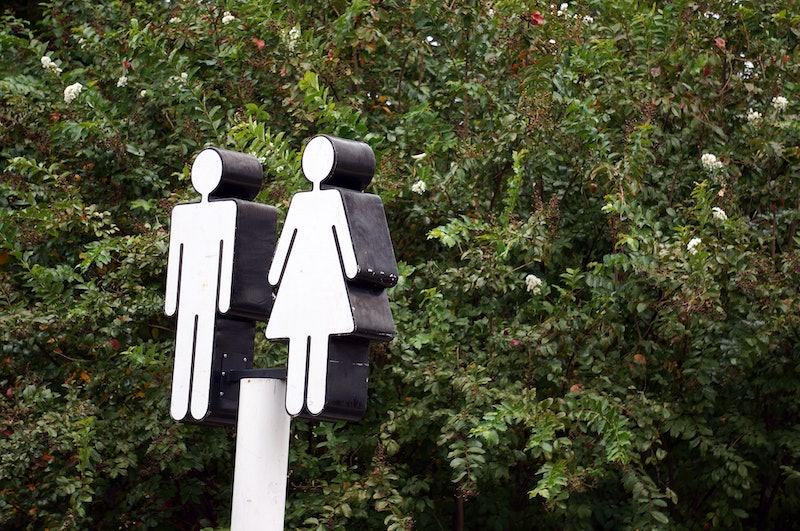 As harmful as they may be, gender norms are so pervasive that they often go unnoticed — but if you need a reminder of how absurd these gendered traditions can be, look no further than MTV's Gender Bent series. Part of MTV's Look Different campaign celebrating diversity, the videos explore the history behind some of the most arbitrary gender-based customs out there — the kind that are rooted in sexist, outdated beliefs, yet which still manage to fly under the radar in the modern day. As you can imagine, they don't hold up well under scrutiny.

For those who need a refresher, gender norms are a simple concept: They're the set of traits and behaviors expected from men and women in a society. Needless to say, they vary wildly depending on the culture in question, but all gender norms have one thing in common: They limit our opportunities and hurt all of us in the end. Some, like the stereotype that women drink wine and men drink beer, are relatively harmless upon first glance, while others are more overtly harmful. Gender norms are to blame for everything from street harassment to the pay gap to the perception that girls are bad at science and math — but more on that last one later.

Gender Bent features three animated videos, each tackling a different myth through the voice of a different narrator. Let's take a look at each topic below.

Some traditions can be easily traced back to their causes, but the "pink for girls, blue for boys" stereotype is not one of them. As explained in the video, children's clothes were actually gender-neutral up until the 20th century, when colors began to be associated with gender. The most hilarious part? We used to have the opposite association — pink for boys and blue for girls — until they randomly switched sometime in the 1940s.

Many people believe that boys are naturally better at math than girls, but that's simply not true. Worst of all, such stereotypes are at least partly responsible for the lack of women in STEM fields today. "The truth is, this gender gap is the result of expectations, not aptitude," the video explains.

Of the three gender norms featured in Gender Bent, the stereotype of the stoic, unemotional man is one of the most harmful. By not allowing men to fully express their emotions, many turn to unhealthy coping mechanisms like alcohol abuse, which men are more likely to develop than women, or overcompensate to avoid being seen as "weak." Furthermore, like most gender norms, its causes are largely arbitrary; up until relatively recently, crying was seen as a totally masculine act. To highlight how absurd it is to expect men not to cry, the video asks us to imagine a world where they couldn't laugh. "It's quite ridiculous," the narrator says. "Just like the notion that men don't cry."

For more information, check out the Gender Bent website.