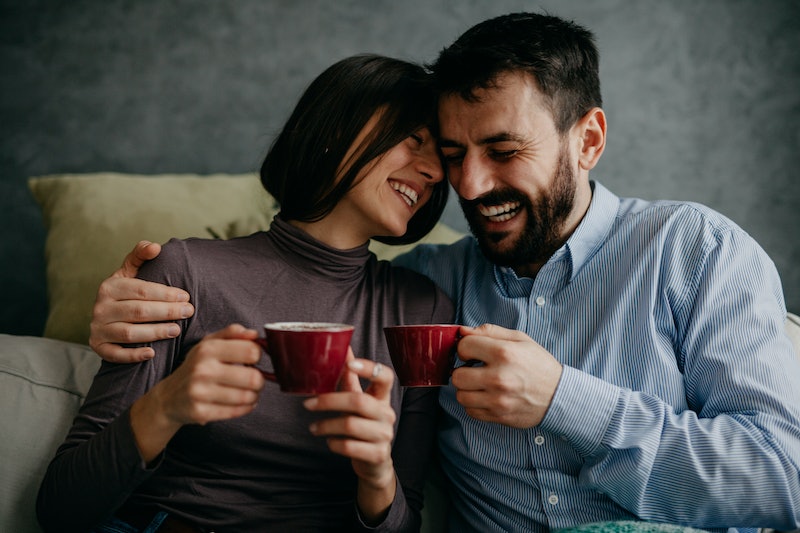 Lying has it's place in even the healthiest of unions. In fact, there are times when lying is even good for your relationship. Of course, I'm not talking about the kind of lying that involves cheating, blowing money, or whatever other activities you promised your partner you wouldn't do. I'm talking about the kind of lies that make life easier, save people's feelings, and motivate each other to be their best selves.

I mean, when you ask your partner "do you want to go with me to my grandma's funeral?" and they say "of course" you do know that they don't really want to go, right? They want to support you, but let's be honest. Nobody wants to go to a funeral. Or how about when you ask your athletic partner if your first attempt at running was any good? They might be thinking that they've seen toddlers taking their first steps with more grace than you, but they're likely going to tell you that you did great and encourage you to keep at it.

When I used to be a Domestic Violence Victim Advocate and Planned Parenthood Responsible Sexuality Educator, I learned the difference between little lies and serious lies. Little lies are the ones that are OK. Those kinds of lies keep us sane and happy, according to Bella DePaulo Ph.D. in an article for Psychology Today, because they help us to be compassionate, kind, or loyal, which are values you might appreciate as much as, or more than honesty. So what lies are good and what lies are bad? Where's that line? Let's explore deception a little, because it's often not just a black and white issue, and a lie that's OK for some couples might not be OK for others.

1. When You've Asked For Lies

What? Asking your partner to lie to you? That's crazy talk right? Nah. Once, when I was in an open relationship, I asked my partner to lie to me about being with other women to help me soothe my jealousy. "Just tell me you have to work late or you're going out with friends, and be convincing." And she did. And it helped. I've also asked my wife to lie to me about my cooking or my outfit if I was feeling particularly sensitive that day. It's OK to ask for what you need, even if what you need is a little dishonesty.

2. When You're Trying Something New

It's tough to learn a new skill, especially if you're starting for the lowest rung on the latter. True honesty about how your partner performed, especially in creative endeavors, doesn't do much to make them better. It is discouraging, and it could wound a vulnerable part of them enough that they give up on their skill. If you can't bring yourself to lie about their efforts, at least find some things to encourage them about. And remember, you're not comparing their beginning effort to a master's work. That's not fair at all. Being supportive, honest, and kind is a difficult but necessary balance.

3. When It's About Trivial, Subjective Topics

If you love fashion, I don't mean to call it trivial. I just mean that whether a person likes your outfit or not can simply mean you have different taste, and not that your outfit is bad. This is an area where lying really happens often in relationships. But style is subjective. Size is subjective. And because in the grand scheme of life, it's better to be complimentary and get on with your evening then spend the rest of the night apologizing for your brutal honesty.

4. When You Don't Have All The Facts

This one's iffy, and it will depend on the situation, but sometimes it's better to lie or withhold information until you have all the facts. Like when you don't tell someone you're having a test at the hospital because you don't want to worry them until you have something to worry about. Granted, most couples would want to support each other through those times, but couples who deal with things like anxiety disorders might not want to trigger that anxiety without good reason. Or one partner might not want to share good news until they're sure it's happening.

5. When It's Not Your Truth To Tell

If someone tells you something and begs you not to tell, but your partner asks you about it, you might have to lie. It depends on the relationship you have with the person who told you, and what the lie entails. This might be more like keeping secrets, but there is a lie involved when you say "I don't know" or flatly deny something you know to be true. It might be better to say "I promised I wouldn't tell you" and it might be better to just play dumb. It depends on the situation, really. These kinds of lies can be big information, like someone coming out of the closet (maybe they wanted to tell your partner themselves) or more trivial stuff, like a surprise party. Again, depends on the situation.

6. When You're Protecting Government Secrets

Don't laugh, but it happens. There are military families, and even civilians who have certain clearances who cannot discuss certain aspects of their work with their families. There are law enforcement agents, social workers, domestic violence victim advocates, nurses, and a whole host of careers that rely on confidentiality. This could translate to lying about how you know the person you saw in the grocery store, or pretending you didn't see your partner's cousin at the clinic.These types of lies can cause conflict in relationships more often that you might think. Confidentiality is sacred and a lot of people have to take it very seriously, not only because it's the right thing to do, but because it's the law.

7. When You Just Don't Want To Talk

Maybe you're too tired for a long, drawn out conversation, or maybe you haven't thought about it enough to know how you really feel about a situation, but it's OK to lie to your partner and say you're fine when you're just not int he mood to talk. We all do it. We had a crappy day but we just want to relax so we say "fine" when our partners ask us what's wrong. Or maybe we're worried that we're overreacting, so we say we're fine when we're mad that our partners leave their wet towels on the bed after their showers. There's no law that says your partner gets complete access to every single one of your thoughts and feelings. Just make sure you're not letting things build into resentments. Resentments are relationship killers.

Like I said, whether these relationship lies will fly with your partner or not is up to you and your partner to discuss. But on the whole, I think we can all appreciate that it's little white lies that keep civility at the core of our interactions.

More like this
Emily Ratajkowski & Pete Davidson's Astrological Compatibility, Revealed
By Nina Kahn
Bumble's "Compliments" Feature Lets You Message Before You Match
By Lexi Inks
15 Ways To Deal With A Toxic Family During The Holidays
By Gabrielle Moss and Carolyn Steber
7 Dos & Don'ts To Follow For The December 2022 Full Moon
By Brittany Beringer
Get Even More From Bustle — Sign Up For The Newsletter