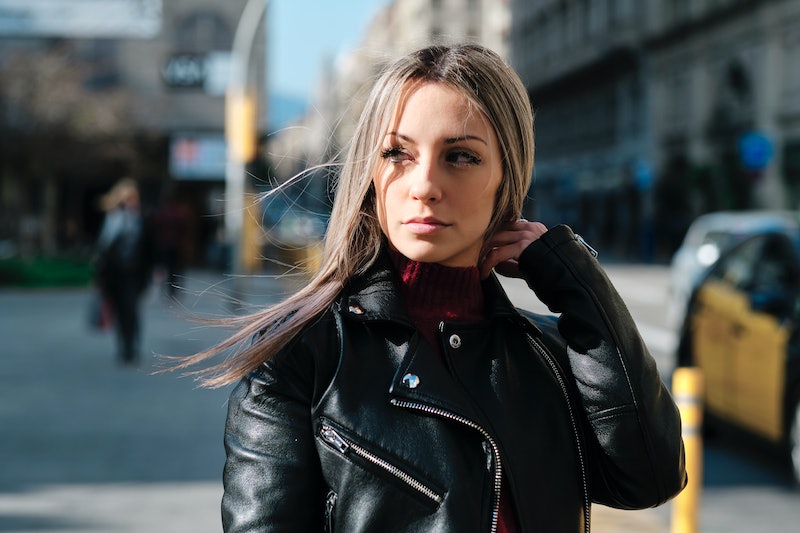 Last week, the brand Armani made headlines when it pledged to go 100 percent fur-free. Armani joins a host of other designers, like Hugo Boss, Tommy Hilfiger, Calvin Klein and Stella McCartney, who have also pledged not to use animal fur in their lines. While eliminating fur is wonderful and certainly a step forward, there does seem to still be a major blind spot for many of us when it comes to the idea of wearing animal skins: we might recognize that fur is bad, but continue to wear leather — which is literally the skin off an animal's back, and just as cruel.

I'll be the first to admit that I totally get it. By far the hardest part of going vegan was letting go of some of my favorite leather pieces. I used to love my vintage leather jackets and boots, and rationalized that those animals "had been dead a long time anyway." But once I saw images of how leather is actually made — and realized that it was not simply the byproduct of cows who were being "used anyway" for food — I realized there was no way I could continue to wear these animals' skins and not feel like a hypocrite. If I was choosing not to eat animals, how was it any different to choose to wear them?

I switched over to a totally cruelty-free closet, and have actually really enjoyed the excuse to revamp my wardrobe. But for those of you still on the fence about wearing leather, know that it's important to at least know the truth about how this product is made. Here are seven reasons you should consider giving up leather.

1. The Way Leather Is Made Is Anything But Glamorous

Most leather comes from cows in India and China. Since the slaughter of cows is legal in only a few Indian states (cows are holy in Hinduism), cattle who will be killed for leather must often travel by road on so-called “death marches” for hundreds of miles to the few states where slaughter is legal. It's part of why these cows look so emaciated — many of them die from exhaustion before they even arrive to be slaughtered.

A PETA investigation found that workers routinely break cows’ tails and rub chili peppers and tobacco into their eyes in order to force them to get up and keep walking after they collapse from exhaustion on the way to the slaughterhouse. If they make it there alive, workers bind together cows’ legs and slit their throats — all while they're still conscious. Cows are sometimes still alive and kicking as their skin is ripped off their bodies. Can you imagine? All so that their skin can be turned into our jackets, shoes, and purses.

2. Leather Is Also Made From Dogs & Cats

Every year, the global leather industry slaughters more than a billion animals. You probably think that leather comes only from cows — but the leather you're wearing might have come from any number or combination of cows, pigs, goats, sheep, alligators, ostriches, kangaroos — and even dogs and cats.

Yes, that's right: while it might not be legal here, an estimated two million cats and dogs are killed for their meat and skin in China every year — and we all know how much of our clothing is made in China. "Yes, dogs and cats are turned into fur, leather, and meat in China," Bruce Friedrichs writes for the Huffington Post. "And it’s worth recalling that even if it says 'Made in Italy' (or wherever), the materials are very likely sourced from the cheapest possible country (for leather, that’s China and India)." Unless the brand you're buying from expressly guarantees otherwise (and good luck with that), that leather jacket might be made out of an animal that you'd consider a pet.

3. Leather Is Not Just From Cows Who Are 'Being Killed Anyway' For Meat

If, like I used to, you thought that cows being used for leather were "being killed for meat anyway," know that it's just not true. The leather industry often calls leather a "by-product" of the meat industry, and has tried to make it seem like the animals would have been slaughtered anyway, almost as though you're helping to waste less of the animal's caracas by buying it. But many of the animals killed in places like India, China, Brazil (and many other countries) are killed expressly for their skins.

According to a 2009 Greenpeace report, Slaughtering the Amazon , leather represented more than a quarter of the value of the Brazilian cattle trade, making leather the most valuable part of the cattle industry, pound for pound. Because leather doesn't require refrigeration, food safety testing, and has such a high mark-up rate when it's sold as clothing, leather is also the most profitable part of the cow. Leather is not so much a "by-product" of the meat industry as it is a "co-product" that directly contributes to the demand for factory farms and the profitability of slaughterhouses. Wear leather, and you are supporting the same industry — and you're not "saving waste" in the process.

4. Leather Is Really, Really Bad For The Environment

Turning skin into leather requires massive amounts of energy and dangerous chemicals, including mineral salts, formaldehyde, coal-tar derivatives, and various oils, dyes, and finishes, some of them cyanide-based. Most leather produced in the U.S. is chrome-tanned, and all wastes containing chromium are considered hazardous by the The Environmental Protection Agency. Tannery effluent contains large amounts of pollutants, such as salt, lime sludge, sulfides, and acids.

Of course, it's not just the leather itself that's bad — it's all the production around it. For the same reasons animal agriculture for food is horrible for the environment — methane and carbon emissions, energy and water use, rainforest destruction, fossil fuels — the production of leather is also extremely detrimental. "A chrome-tanning facility wastes nearly 15,000 gallons of water and produces up to 2,200 pounds of 'solid waste' (e.g., hair, flesh, and trimmings) for every ton of hides that it processes," PETA reports.

Leather seems like a perfectly "natural" material to wear; perhaps even less potentially-chemical filled than synthetic fabrics. But think about it: in order to turn dead flesh into a material you can wear that won't decompose, there is a lot of processing and chemicals involved — and it might not be good for your health. The chemical-filled process of tanning described above stabilizes the collagen and protein fibers in skins so that they actually stop biodegrading — but you're left wearing the remnants of cyanide, formaldehyde, and all those other not-great chemicals, which may be why we see people who work in and around leather production getting cancer at such high rates. Which brings us to...

6. People Also Suffer In The Production Of Leather

Workers, including children, have been documented soaking hides in toxic chemicals and using knives to cut the skins. "The unprotected workers stand barefoot in cancer-causing chemicals and use acids that can cause chronic skin diseases. Children even operate machinery and it is not uncommon for children to start working in the tanneries at the age of 13. People who work in and live near tanneries suffer as a result of exposure to the toxic chemicals used to process and dye leather," PETA reports.

Sadly, this risk also extends to people who live near leather production. The Centers for Disease Control and Prevention found that the incidence of leukemia among residents near a tannery in Kentucky was five times higher than the U.S. average. Arsenic, a common tannery chemical, has long been associated with lung cancer when people are exposed to it on a regular basis, and studies of leather-tannery workers in Sweden and Italy had cancer risks “between 20% and 50% above [those] expected.”

7. There Are Plenty Of Cute, Ethical Alternatives That Still Look & Feel Great

Just because I don't wear leather anymore, that doesn't mean I don't still like the look of it (even if I do sometimes feel conflicted about perpetuating the style of leather, to be honest). But if you think anything but real leather looks cheap, think again: there are a host of new brands making ethical, vegan leather goods that look and feel as expensive as animal skin. Good Guys, MooShoes, Wills, UnicornGoods, Beyond Skin, and MATT & NAT are some of my favorite places to shop online, but the list goes on and on. There are cheaper alternatives as well on Lulu*s, and major sites like DSW and Zappos have vegan filters on their site as well.

There's really no excuse to keep buying leather when the alternatives out there are so cute and ethically made. Wearing all that suffering just isn't a good look for anyone, and the true luxury is being able to just opt out.