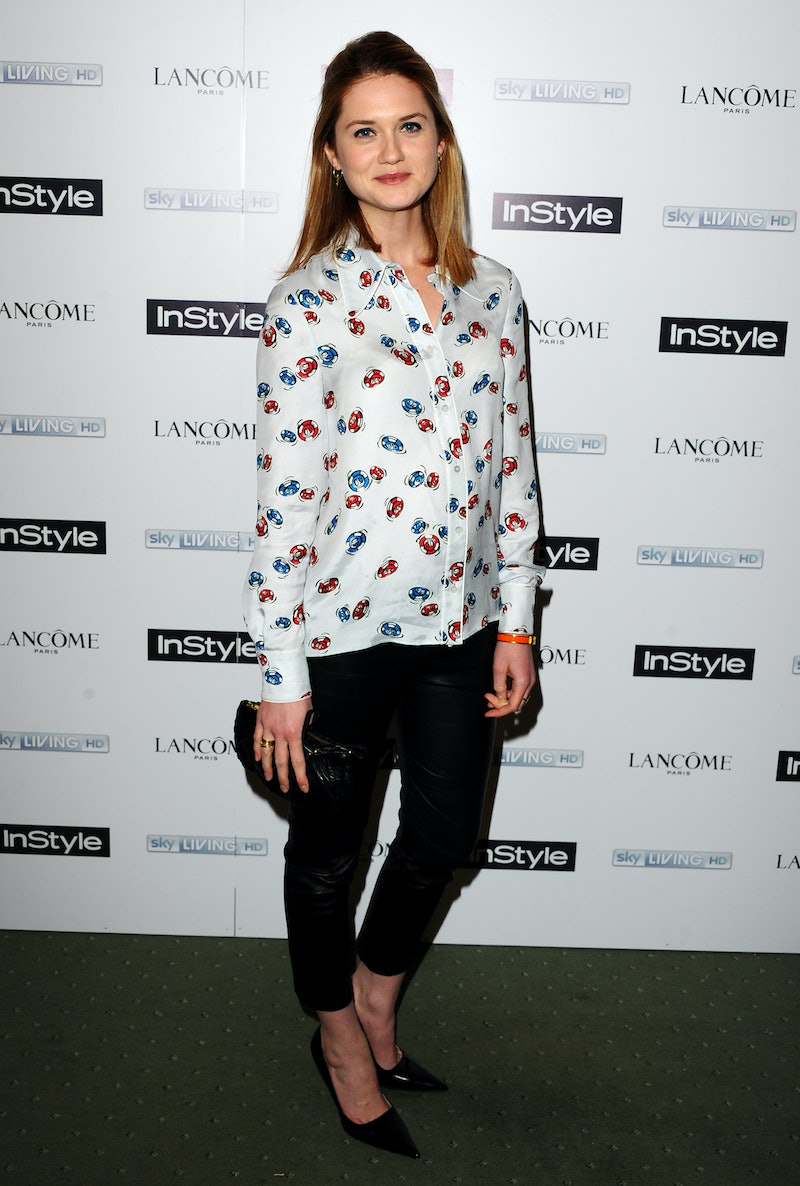 J.K. Rowling's not the only one with opinions about final pairings of her Harry Potter characters. British actress Bonnie Wright, who played Ginny Weasley in the Potter films, commented on Rowling's recent revelation that Harry Potter should've ended up with Hermione Granger and not the youngest Weasley in an interview with The Telegraph at InStyle's BAFTA party. According to Wright, Ginny would've been just fine without The Boy Who Lived — and we agree.

Rowling made headlines earlier this week by saying that, in retrospect, she believed that Harry and Hermione were a better match than Hermione and Ron — and by extension, Harry and Ginny. She told actress Emma Watson in her interview with the latest issue of Wonderland magazine that she'd written the Ron/Hermione romance as a form of "wish fulfillment" and that time away from the story has since given her a renewed perspective on how she ended things relationship-wise. (We don't really agree, but whatever.)

In response to these recent Potter developments, Wright told The Telegraph:

Ginny is a tough cookie so she’d have been fine. She dated Dean Thomas before Harry, after all.

True that, sister. (She also dated Michael Corner, just saying.) Did she really need a marriage to Harry Potter to have a fulfilling life? Definitely not.

Here are five reasons why Ginny Weasley would've been just fine if she didn't find love with Harry Potter:

She Was A Damn Good Quidditch Player

Somehow we always manage to forget that Ginny Weasley won the Quidditch Cup for Gryffindor while Harry was off serving detention for not being able to control his angry outbursts. She could've gone on to play for the Holyhead Harpies and become an internationally famous athlete.

She Was A Powerful Witch

Remember those two Reductor Curses from Order of the Phoenix? That girl knew her way around a spell and she could do some serious damage. If that doesn't scream, "I don't need a man to protect me," I don't know what does. She also held her own during the final battle while dueling with Bellatrix Lestrange. #BADASS

Everyone Already Loved Her

Dean Thomas, Michael Corner, Neville — if that Harry Potter never came along, she'd probably have spent her life with plenty of potential boyfriends lining up for her.

She Went Through The Chamber of Secrets Drama

Considering the facts — she was possessed by Voldemort's soul via his journal and almost died — there's nothing that life could throw her way that she couldn't handle. And she came out of it with zero signs of PTSD, which is an impressive feat for an 11-year-old. Truly tough as nails.

Bonnie Wright is absolutely, 100 percent right about that one. Considering she had no qualms about standing up to Malfoy in the middle of Flourish and Blotts, Ginny would've been just fine getting through life and relationships as an adult, as well. I mean, she was the one that did the breaking up in all of her relationships.

So don't cry for Ginny Weasley because she'd be just fine.