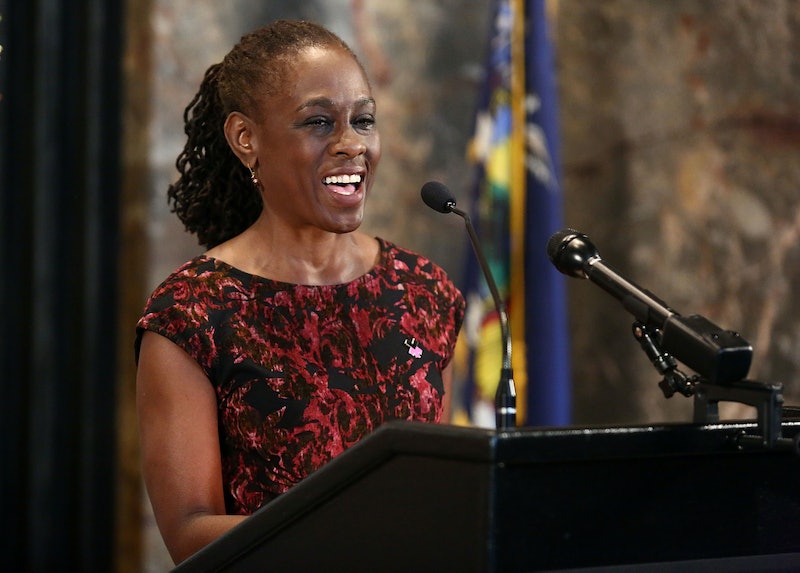 It's hard to believe that tampons — a necessity for so many women — aren't readily available to girls in school who can't afford the expensive monthly purchase or are simply caught off guard when that fun time of the month hits. As all high school-aged girls know, finding out you started your period in the middle of class is absolutely humiliating. And asking for a tampon can be just as daunting, thanks to the ridiculous stigma attached to the biological cycle. Poet, speechwriter, and New York City first lady Chirlane McCray wrote a poem advocating for free tampons in public school bathrooms and turned that stigma right on its head.

McCray's poem, which she tweeted in sections, is a response to a legislative bill presented by City Councilmember Julissa Ferreras-Copeland on Tuesday that proposes tampons be made available free of cost in public school bathrooms, homeless shelters, jails, and prisons. The Council also suggested that the state stop taxing sanitary products, such as pads and tampons. Currently, New Yorkers can purchase groceries, medications, and condoms tax-free, but the up-charge for being a woman still exists. Ferreras-Copeland, who is spearheading the project, touched on how it's become normalized to essentially charge women a premium for menstruating. At this point, it's just a part of everyday life.

McCray isn't hesitating to enter the political sphere when it comes to these issues that so heavily affect each and every woman. The first lady read her poem "Tampons for All" at Twitter's #PositonofStrength event.

The Guardian's Jessica Valenti hit the nail on the head when she wrote that dealing with menstruation hygienically is a privilege and not a given in our society. As she pointed out, the United Nations have even called the inaccessibility of feminine products a violation of human rights. Craig Mokhiber, Chief of the U.N. Human Rights Office Development and Economic and Social Issues Branch, categorized the stigma as a form of discrimination:

In a world where 2.5 billion persons lack adequate sanitation, where menstruation is often stigmatized, and women face multiple forms of discrimination, the failure to take immediate action to guarantee their right to water, sanitation and hygiene poses dire consequences. It demands the attention, not just of the human rights community, but of health professionals, governments, activists, economists and broader society.

In a consumer-based society, such as the United States, paying for tampons and pads to store at home is acceptable. Outside of the home, however, it should be a different story. Nancy Kramer, the pioneer of Ohio's "Free the Tampons" initiative, told the Huffington Post that making women pay for tampons is akin to making men and women pay for toilet paper. Her campaign attempts to provide free tampons and pads in all public restrooms.

Tampons and pads should be treated just like toilet paper. They serve the same purpose — items to tend to our every day, normal bodily functions.