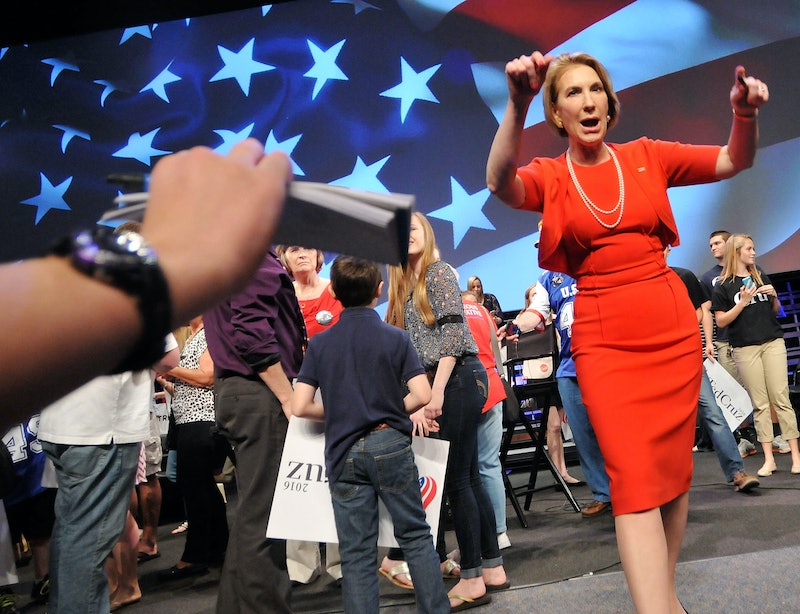 In an unexpected turn of events, Carly Fiorina sent out an email on Wednesday telling her past supporters that she is relaunching Carly for America, her previous presidential campaign organization. The email, sent on March 23, came as somewhat of a surprise: Fiorina suspended her campaign in early February, she endorsed Texas Sen. Ted Cruz in early March, and she has remained relatively low-key since the New Hampshire primary. So why would Fiorina relaunch Carly For America now? It seems that she wants to help elect a conservative outsider to office in November.

In the email, Fiorina talks about things like bringing back a "citizen government" and doing more than "replacing D's with R's." As the only woman Republican presidential candidate this election season, Fiorina was most decidedly an outsider candidate. Although much of her campaign vitriol focused on typical conservative ideals — advocating for things like defunding Planned Parenthood and renouncing the idea of socialism — Fiorina redefined "outsider" candidate by proving that a non-politician could have the wits and intelligence to understand politics with the rest of the establishment candidates.

Now, Fiorina is revisiting her campaign's outsider label and trying to stay relevant in this volatile presidential election. Surprisingly, though, she never once mentions Cruz in this email, which is odd given her seemingly enthusiastic endorsement of him in March. In any case, Fiorina made it clear in her email that the main goal in relaunching Carly for America is to redefine Washington as we know it:

It's about defeating the Washington establishment of both parties—and electing real conservative leaders from outside the political class, who will engage citizens around the nation and lead the charge to take our country back. These citizen leaders have the commonsense solutions and the clear-headed perspective we need to solve our nation's problems. Instead of representing the liberal establishment, they will represent the American people.

Later on in the email, Fiorina clarifies the new mission of Carly for America, which was previously dedicated to funding and supporting her campaign all the way to the White House. At the center of this campaign relaunch is getting back to a form of "citizen government," which Fiorina wrote would only be possible by helping conservative outsiders win in November:

First, we will identify principled conservative candidates from outside the political class, who aren't afraid of a fight and aren't afraid to shake up the status quo—and we will introduce them to the American people. Second, we will give them the critical boost they need to win: by campaigning with them, supporting them, and fundraising for them. Anything we can do to make sure they have all the resources they need to amplify their voices, bypass the media and the establishment, and win over voters.

On the day before Fiorina sent out this email, she tweeted out three videos that advocated for electing conservative outsiders and helping restore citizen government to the people. In the first video, Fiorina, along with Cruz, talked about how people are apparently fed up with establishment politics and desperately want a change.

In her second video, Fiorina's rhetoric sounds a bit like Bernie Sanders' in that she claimed a majority of the American population views the government as corrupt. By appealing to these people through a relaunch of Carly for America, Fiorina could actually help Cruz gain more support from those who do think the government is incompetent and needs a change.

In the final video, Fiorina advocated for giving the American people a voice again, even in the midst of an unruly presidential election. It seems that Fiorina hopes to do this by using the Carly for America funds and resources, which could potentially be effective for Cruz's campaign in the coming weeks as he tries to once and for all beat out Donald Trump as the front-runner and eventual nominee.

Maybe Fiorina missed the political excitement and was just trying to stay relevant when she released this email announcing the relaunch of Carly for America? Or maybe this is her master plan (albeit a little late) to help push Cruz to the forefront of the Republican campaign. By advocating for the people and championing a form of government that will put decisions back in the hands of "outsiders," Cruz's connection to Fiorina (via her endorsement) could offset his establishment image and help him pass Trump before the Republican party selects a nominee.

But, it will take a lot of work for Fiorina to gain momentum this late in the game, especially as she renounces the support of the Republican party. As Fiorina wrote at the end of her email, "You know just as well as I do: if we want to elect real conservatives, we cannot depend on the Republican Party. If we want to change Washington, we're going to have to do it ourselves, and we're going to have to do it together."