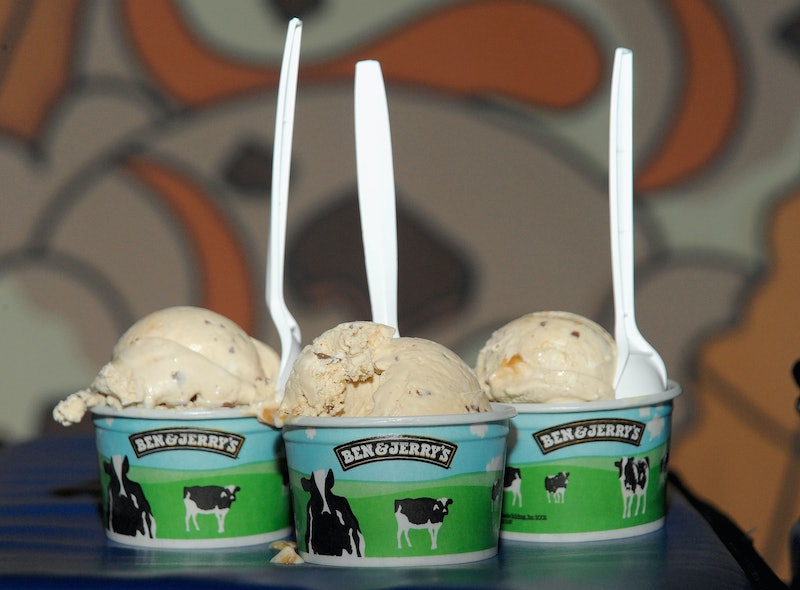 You will rarely find a person who freely admits to not enjoying a big bowl, waffle cone, or rebel unmeasured spoonful straight from the container of Ben & Jerry's ice cream. When you press them for details about favorite Ben & Jerry's flavors and add-ins, it's likely that Phish Food or New York Super Fudge Chunk are some of the first words they rattle off in reply. Ben & Jerry's is truly a legendary brand when it comes to the frozen cream industry. Just as each of its new flavors is released with celebratory fanfare, when it's time for everyone's favorite Vermont hippies to retire a recipe, a temporary veil of grief falls over the majority of the ice cream-loving community.

Even going as far as to maintain a "graveyard" of discontinued flavors, Ben & Jerry's knows how much we miss its classic combos. Hey, we even miss the quirky ones that didn't get a fair chance, and got pulled from store shelves before their true glory was discovered. (Ahem, Dave Matthews Band One Sweet Whirled? Gone too soon. Too soon.) Why is this? Because Vermont's finest really is synonymous with good ice cream.

Want to take a little walk down memory lane? Here are seven Ben & Jerry's flavors that you forgot ever existed, but that you'll probably be craving within the next 20 minutes. Happy drooling!

Starting this list off with a bang, Wavy Gravy is one of those flavors that is highly representative of Ben & Jerry's brand... and, of course, highly delicious. Named after the iconic Woodstock emcee and '60s activist, Wavy Gravy brought more than rock vibes and visions of tie-dyed tees to the table; its decidedly decadent combination of caramel, cashew, and Brazil nut ice creams with swirls of hazelnut and fudge had fans begging for its return.

For the chocoholic in us all, Brownie Batter was nothing more than an assault on the senses in the form of brownie batter-flavored ice cream enhanced by an inexcusably luscious streak of... more brownie batter. No wonder this one got deep-sixed — is all that chocolate without the respite of a lighter flavor even legal? Batter on batter on batter. At least the name wasn't false advertising.

Oatmeal Cookie Chunk was a no-brainer. The combination of cinnamon ice cream, oatmeal, fudge, and actual chunks of whole oatmeal cookie was a rich and pleasing conglomeration that you were hard-pressed not to finish in one sitting. Maybe it was too rich? Maybe Ben & Jerry's couldn't keep up with the demand we were placing on them for oatmeal cookies. We'll never know the reason for its retirement, but we all know this one definitely deserves to make a comeback.

There's no way you remember this one. Tennessee Mud lasted only one year in the very late '80s. Chances are, you had not hit your peak booze-in-coffee phase at that point in life, so it's highly unlikely this flavor was ever one you got to try. With a base of coffee and Amaretto-blended ice cream, Jack Daniels whiskey, and slivers of roasted almonds, it sounds super appealing to my taste buds, but something tells me its short-lived existence must mean consumers discovered something in that combination that I'm clearly not accounting for here. RIP Tennessee Mud.

Wait, milk chocolate ice cream with cow-shaped, white fudge mix-ins swirled around white chocolate ice cream with cow-shaped, dark fudge mix-ins? Bovinity Divinity turned everything we knew about ice cream on its head by simply inverting the chocolate and vanilla aspects of the recipe, then wrapping those up in each other. Ice cream-ception. It was fun, it was a comfortingly classic flavor profile, and, little cows floating in your bowl? Let's be honest, super cute. Don't even pretend it's not.

This is a shameless nod to Seinfeld's eponymous made-up winter holiday, and by merit of its name alone, I cannot get enough of this retired flavor. Besides containing some of the most well-loved components of holiday baking (brown sugar, cinnamon, gingerbread, caramel), it conjures up images of the Costanza family, feats of strength and, of course, the Festivus pole. "They drove my family out of Bayside, sir!" I'm filing my official plea, Ben & Jerry's: Bring back Festivus.

The disappearance of this flavor, to me, is a travesty. It's the Almond Joy of ice cream flavors, and who doesn't love Almond Joys? A creamy, coconut base with fudge chips and roasted almonds can do no wrong; it's such a classic combo. Bittersweet dark chocolate countering the sweetness of the coconut, depth from the roasted almonds — it's no wonder this flavor made a comeback at Ben & Jerry's scoop shops from 2001-2009. The public demands another re-issue. Coconut Almond Fudge Chip is too good for the graveyard!

With the culinary brainpower possessed by the newest generation of flavor creators at Ben & Jerry's, I've no doubt the recent releases are going to be some of the best, but that still doesn't sate my burning desire for the retired combos I can't have. I guess it's time to move on and stop crying over spilled cream and sugar, but enjoying nostalgia only forms of food you can no longer purchase is an enjoyable pursuit in itself. Plus, contemplating incredible Ben & Jerry's flavors has made me more motivated than ever to eat ice cream today, and that is saying a lot.