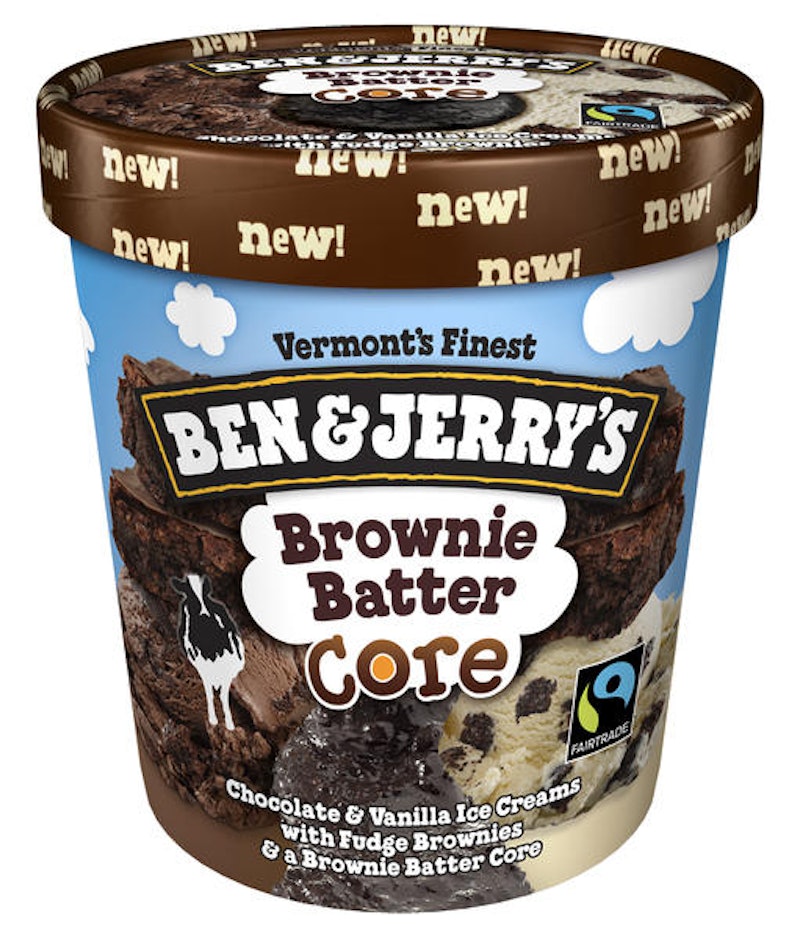 These days, you know that if something is announced on Snapchat, it's going to be a big deal — and few things in this world are a bigger deal than hearing there are three new Ben & Jerry's ice cream flavors up for grabs. I'll repeat for good measure, in case people in the back can't hear me — there are three new Ben & Jerry's ice cream flavors coming to a freezer near you. And not just any flavors! We're talking ~Cores~ flavors. You know, the pints that come infused with a gooey, creamy, delicious center, usually of the fudge, peanut butter, or cookie butter variety. Ben & Jerry's, a brand that is forever mindful of its millennial audience, has decided to reveal the new flavors one by one with separate announcements on Snapchat, starting with Brownie Batter Core, a combination of chocolate and vanilla ice cream, fudge brownies, and a brownie batter center. And if that sounds like a dream come true to you, just wait until you see what else the Vermont-based ice cream brand has in store.

If you ask me, anything that contains the words "brownie batter" is pretty much already the epitome of perfection. But for fans who think they can do better, keep your eyes glued to your phone (like you don't already). Follow Ben & Jerry's on Snapchat (username benandjerrys) for a second announcement at 5 p.m. on March 8, and again at 9 a.m. on March 9 to see the tasty new trifecta completed. All three new flavors should arrive in stores sometime in the next few weeks, and will sell for $4.79-$4.99 per pint.

Already, 2016 has been a busy year for Ben & Jerry's. In February, the brand unveiled its new almond milk-based, dairy-free ice cream flavors, and if Twitter is anything to go by, I think we can call these a success.

The new core flavors may not be dairy-free, but anytime there's chocolate ice cream in the picture, I'm going to be a happy girl. Stay tuned to see what other flavors pop up next.