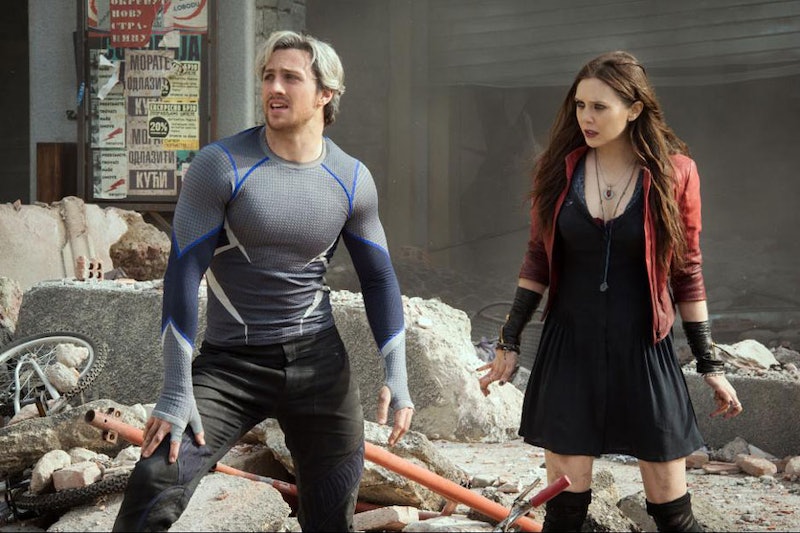 As fans of the franchise are quickly realizing, no one is safe in the Marvel Universe. The first time audiences were introduced to Quicksilver and his sister Scarlet Witch in Avengers: Age of Ultron, (spoiler!) half of the brother and sister team was eliminated before the end of their big screen debut. Let's harken back to that fateful moment: During the final battle, Quicksilver (played by Aaron Taylor-Johnson) charges into the chaos to shield Hawkeye (Jeremy Renner) and a young boy from a firing squad of bullets, only to get hit, and die, himself. He dies the ultimate hero, of course, but it doesn't make his death any less painful. Especially since his other half (Elizabeth Olsen) is now without a brother.

But let's not forget: [This is the Marvel world, and while no one is guaranteed to live until the next film, almost anything is possible. Is there any way Quicksilver could make a surprising return for then next Avengers film? Olsen, who will tackle her Scarlet Witch character again for Avengers: Infinity War (parts one and two), has some thoughts about the ultimate fate of her onscreen kin. Could he be resurrected? "I would love that," she says, nodding her head furiously. "Just because selfishly I love Aaron, and I want Aaron to have to go to location wherever we are filming and hang out with me."

Personal reasons aside, would it even be possible in the constructs of this comic book universe? "It's not impossible for them to bring back a dead person. They gave Clark Gregg a whole series," she says, referencing the ABC spinoff Agents of S.H.I.E.L.D. "I'm pretty sure [Scarlet Witch] is capable of it. The Nexus. She's able to go in between the past and present in different parallel universes."

Well that certainly sounds promising. "We haven't even talked about that part of her abilities, though. That's in the comics and hasn't made it to the films, so if we decide to go in that route I think that would be an interesting way to bring him back."

Did you hear that, studio heads? It's possible! Fingers crossed Quicksilver and Scarlet Witch make a speedy (ahem) reunion for the next film.