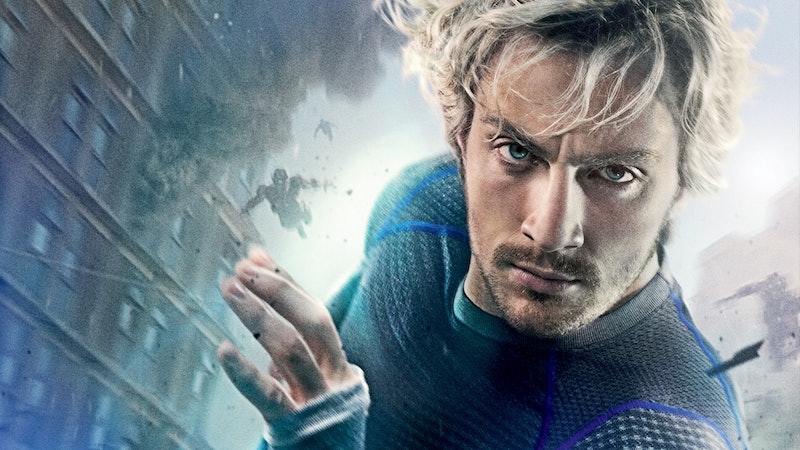 Now that we've all seen Avengers: Age of Ultron (hopefully), we can break the spoiler chains and talk openly about the film. (However, definitely turn back if you're a Susie Come-Lately.) The biggest shocker in the superhero team-up sequel was death of Quicksilver. Scarlet Witch's super-speedster twin brother met his end when he threw himself in front of a rain of bullet fire to save Hawkeye and an innocent Sokovian child. Many aspects from the Marvel comic books were extracted for Age of Ultron, but was this one of them? Did director Joss Whedon and the studio have just cause written in the pages to kill off this player, or was this an original thought?

The answer to "does Quicksilver die in the comics" is not black and white. Yes, he does die in the comics, but he also lives to fight another day. How is this possible? Well, when your sister has the power to alter reality to her liking, anything is possible. Elizabeth Olsen's Scarlet Witch is a bit different than her comic book counterpart. Instead of telekinesis and mind manipulation, Wanda Maximoff wields chaos magic that allows her to warp reality. It's a very unstable power that has caused a lot of problems in the comics. To understand Quicksilver's comic book death, you must understand Scarlet Witch's famous storyline, House of M.

With her abilities becoming increasingly more difficult to control, Wanda inadvertently kills three members of the Avengers, including Hawkeye and Vision. Earth's Mightiest Heroes and the X-Men attempt to figure out how to handle such an untamable force. When Quicksilver discovers that a likely option is to kill his sister, he convinces Scarlet Witch to change reality into a world where their family, including Magneto, rule the world. One by one, the Avengers and X-Men regain their memories and go after House of M. Amid the battle, Magneto also has a revelation and goes after his son, angry that he used Magneto's name in a plan to warp the world. In a rage, Magneto uses his power of magnetism to squash Quicksilver with a bevy of rubble. Sensing her brother's death, Scarlet Witch rushes to his side and uses her magic to resurrect him.

So, yes, technically Quicksilver dies in the comics, but only for a couple of pages. If only Scarlet Witch had her original powers in the movie. Sigh...

Whedon spoke about the decision to kill off Quicksilver to Empire magazine's podcast. He said,

It’s disingenuous to make, as I refer to it, a war movie and say there is no price. In this movie we’re saying, 'prove to me that you guys are heroes.' And [Quicksilver] is the guy who is the least… the most arrogant, the most annoying — if you watch the DVD extras, an incredible pussy hound — and Hawkeye genuinely hates him and that’s the guy who saves him. I knew that it would be resonant and it would make everything work and matter more…

Aaron Taylor-Johnson, who plays Quicksilver in Age of Ultron, also talked about his character's potential to return in some capacity. Though Marvel Studios President Kevin Feige confirmed that he is "100% dead," the actor told Cinema Blend that he'd "love to find what that loophole is."

Avengers: Age of Ultron is now playing in theaters, and most of the characters, including Scarlet Witch, Captain America, Iron Man, Hawkeye, Black Widow, Falcon, War Machine and Vision, will return for Captain America: Civil War , in theaters on May 6, 2016.