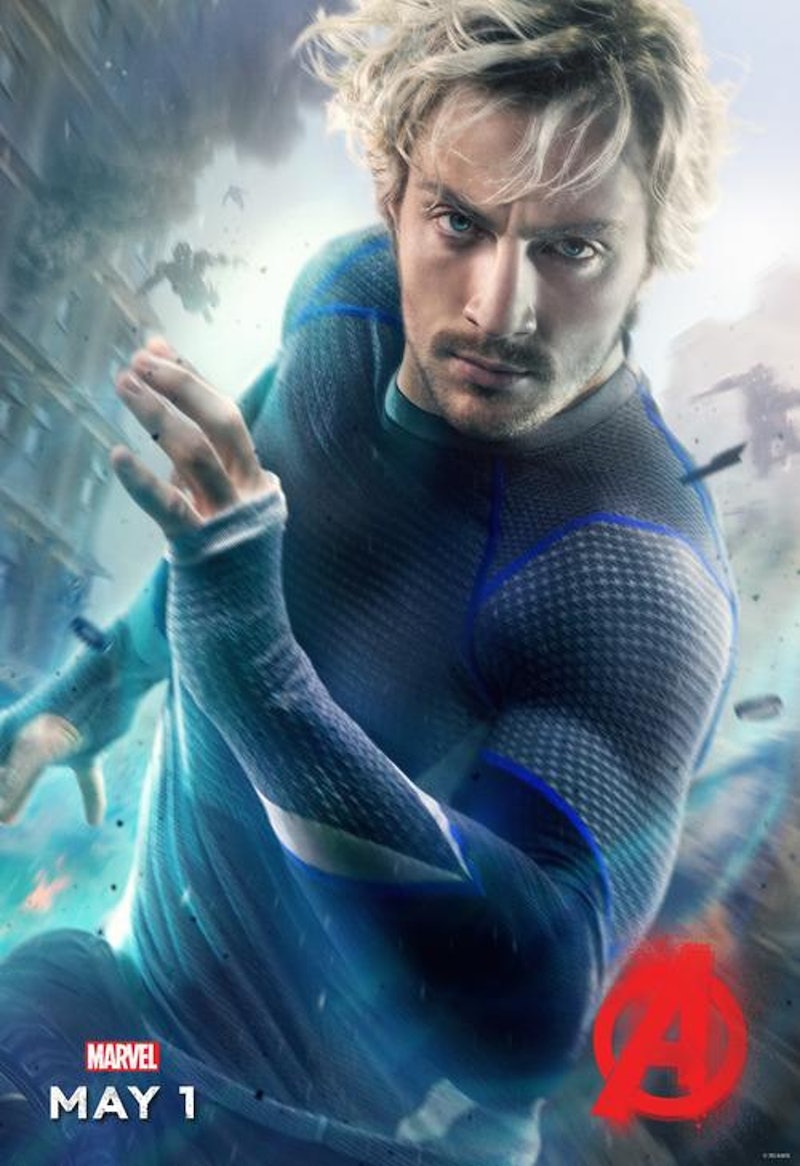 There are massive spoilers for Age of Ultron ahead. Just when we thought we had already found our favorite cinematic adaptation of Marvel's Quicksilver in Peter Maximoff from X-Men: Days of Future Past, we were proven wrong as soon as Avengers: Age of Ultron introduced Aaron Taylor-Johnson's Quicksilver. Naturally, the film proceeded to kill him off in the final battle, causing widespread devastation because the snarky little jerk was starting to grow on us. While fans are holding out hope that Quicksilver will return for Avengers 3, there are just as many people who wouldn't mind watching a film starring him. So what are the chances that Quicksilver will get his own Marvel movie?

As far as I'm concerned, his chances are pretty likely. There are really only two things that are working against him in this instance. First of all, Pietro is, as previously noted, a cross-over character that has appeared in both 20th Century Fox's X-Men film series as well as Marvel Studios' Avengers film series. If 20th Century Fox decides to do more with Pietro, or even give him his own movie first, then that might prevent Marvel from giving the character a spin-off. Next, there's the fact that he died in the same movie that properly introduced him. I mean, Black Widow has been an Avenger since the second Iron Man movie, nor is she dead, and she still hasn't gotten a film.

However, both of those are potentially easy to work around. The easiest thing to work around is his death in Age of Ultron, because there is extensive evidence that we might see the character again in upcoming films. And no one ever really stays dead in comic books, except for, like, Uncle Ben of Spider-Man fame. The Avengers film franchise just brought Bucky Barnes back, so bringing Pietro back wouldn't exactly raise any eyebrows — especially not among the fans who adored him so much. Plus, the fact that Age of Ultron viewers adore him so much is the prime reason why Marvel might decide to explore the character further in the Avengers series rather than in X-Men.

After all, while Evan Peters' Quicksilver was one of the best parts of an already great movie, X-Men's beloved darling is Wolverine. Quicksilver was a tangent attached to the film, rather than a character they were introducing in order to build into future films. Age of Ultron's Quicksilver, on the other hand, helped drive the plot, and his sister, Wanda Maximoff, has joined the New Avengers, so there's a place for him in the movies going forward that wouldn't just relegate him to the role of delightful extra.

I'd put our chances of Quicksilver getting his own movie at about 50 percent, to be honest. The only real question is if that movie will be coming from 20th Century Fox or Marvel Studios.