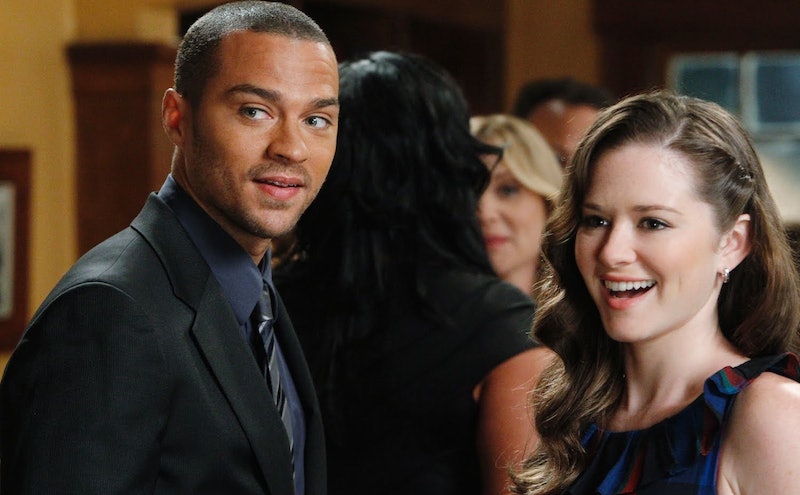 The promo for the upcoming Season 12 of Grey's Anatomy featured Meredith Grey herself warning viewers that, "You are about to find out that everything has changed." In some contexts, that warning may sound ominous, cautioning about trouble and grief ahead. But, in the context of ABC's long-running medical drama, change is a good thing. Season 11 saw viewers mourn the loss of Dr. McDreamy himself, as Patrick Dempsey left the show — and his iconic character, Derek Shepherd — behind. So change will actually be welcome if it means an influx of happiness and comedy in the halls of Grey Sloan Memorial Hospital. But, judging by April and Jackson's rocky relationship, Season 12 won't all be sunshine and rainbows.

Doctors April Kepner and Jackson Avery got their happy ending in Season 10 when the couple eloped, ditching April's wedding to cute EMT Matthew to marry each other instead. But, as with all stories that continue to unspool even after the hard-fought "happily ever after" is won, things didn't stay rosy for very long. The first sign of trouble came when the couple couldn't agree on whether or not to raise the baby in a religious household. Deeply Christian April assumed her child would follow in her faithful footsteps, but Jackson didn't want to raise his son or daughter to believe in what he called "silly" fairytales.

These early clashes over the baby's future were only exacerbated when April's estranged mother, Karen, came to town to help out. Jackson thought her offers to help were sweet, although April found them condescending. (Of course, it turned out that Jackson was the one who called Karen for help, worried that he had no experience in caring for a child.) April and her mother eventually made up... but, these conflicts over religion and parenting were only stepping stones on their way to true heartbreak.

During a routine ultrasound, it was revealed that April and Jackson's baby suffered from osteogenesis imperfecta — or "brittle bone disease" — a condition which was almost certain to result in an excruciatingly painful death for the child only moments after birth. Jackson wanted April to get an abortion in order to spare their baby that awful fate, but April was horrified by the thought of something so against her religious teachings. Caught between two impossible decisions — whether to end their child's life or watch him suffer — they reached a compromise: They induced labor early, knowing the baby couldn't survive, so they could at least hold him in their arms as he died.

Unfortunately, this tragedy didn't serve to heal their troubled relationship; instead, it ended up driving April and Jackson further apart. During the two-hour episode following The Death Of McDreamy, which spanned almost a year as Meredith went AWOL and gave birth to a daughter named Ellis, it was revealed that April had left Seattle (and Jackson) behind. She and Owen Hunt had joined the military as doctors, and were serving overseas. Although she was originally only supposed to be gone for three months, April kept extending her tour, exhilarated by the good work she was doing. She finally came home and put her battlefield tactics to good use when she saved a man trapped in a car.

Eventually, though, April felt the need to go back overseas and continue to serve her country. When she brought this up with Jackson, he gave her an ultimatum: She could go if she wanted, but she shouldn't expect him to be waiting for her when she got back. Season 11 ended on this emotional cliffhanger for the couple, but in a post-mortem interview of the finale, April's portrayer Sarah Drew indicated that there might be a modicum of hope for the couple. "I don’t see it as a total breakup, I see it as they’re definitely in a really, really rough situation," she told Entertainment Weekly. "I don’t think that it’s the nail on the coffin for them. He says if you go, we’re done, but April still has to make a choice."

Good news, right? Not so fast. In August, TVLine caught up with Shonda Rhimes at the Television Critics Association summer press tour, and the producer spilled several details about the upcoming Season 12, including [spoiler alert!] the fact that "three months will have lapsed when the new season picks up," and "April made good on her threat to resume her overseas work, leaving Jackson high and dry once again." If Jackson sticks to his ultimatum, this should mean that he and April are over for good. Could it be??

Meredith and Derek, Cristina and Owen, Callie and Arizona, now April and Jackson — Does love never last on Grey's Anatomy? At least things seem to be going well for Alex and Jo. (For now, anyway...)