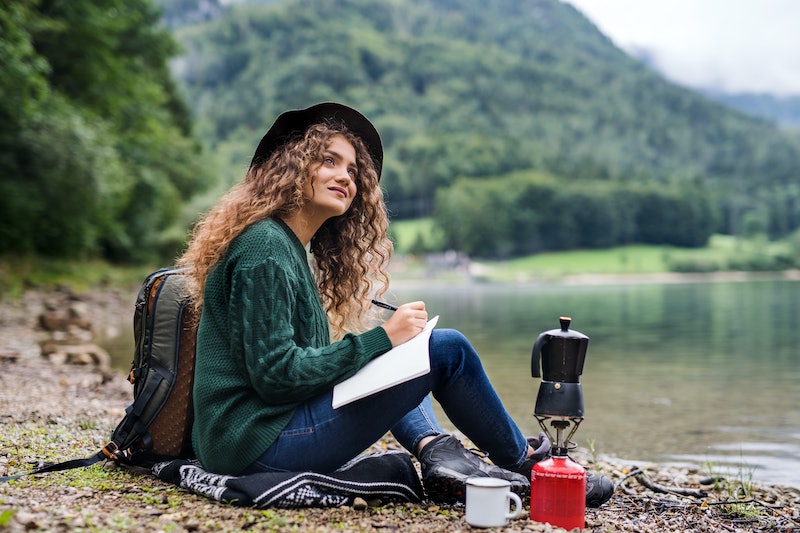 Doesn't it sometimes feel like everyone on the planet is all successful and motivated except for you? Those people at the gym, that vegan coworker, your cousin the author — they all seem to have discovered ways to have more self-discipline. And they make it look so easy.

But self-discipline isn't easy, and it wasn't for them at first, either. Because the truth is, no one is born with the magic ability to publish books, or the miraculous desire to give up dairy. These things are hard to do, and the process sucks. So really, the only difference between you and the so-called successful people is that they stuck it out, and you didn't.

That sounds way harsh, but it's actually meant to be super relieving. I mean, those successful people aren't better or smarter or faster than you are — they are simply more self-disciplined. What a relief to know that you can have all the same things if you put in the same amount of effort.

You can do these things. They don't require any special powers — just a little (OK, sometimes a lot) of extra effort. So if you want to make make a change, from something small like waking up earlier, to something huge like running a marathon, then here are some ways to stick with it until you meet your goals.

One of the biggest ruiners of self-discipline and self-motivation is that "eh, I'll do it later" feeling. Maybe you're tired, or it's raining, and it just feels so much easier to stay on the couch. But if you keep putting things off until tomorrow, soon a week has passed, and then a month, and then years without anything getting done.

So keep this in mind — you're always going to be tired, and it's always going to rain. My point is, try not to use everything as an excuse. It may feel really difficult, but just get up and do it anyway. Write a few pages of your book, spend an hour practicing the piano, or go for a five minute jog outside. It may feel fruitless and difficult at first, but it'll get much easier if you keep pushing forward towards your goals, even when you don't feel like it.

2. Set Out To Prove People Wrong

It'd be great if we could stay disciplined for ourselves without anyone else in mind. But sometimes it's good to draw a little motivation from all the haters, especially when we're feeling less than jazzed about making a change. So think of the times when people shot down your dreams, or threw a a judge-y smirk in your direction. Wouldn't it feel great prove them wrong?

3. Remove Any Temptations Or Distractions

If you get super distracted by Facebook, or can't help but max out your credit card at the mall, then think of ways to avoid these temptations and distractions. According to Amy Morin on Forbes, "Although we’d all like to believe we have enough willpower to resist even the most alluring enticement, it only takes one moment of weakness to convince ourselves to cave to temptation. Making it difficult to access those temptations can be pivotal to increasing self-discipline."

If the Internet is your downfall, then hide your phone or disconnect while working on a project. If you've been having a problem with your budget, then leave your credit card at home while you go out. Little changes like these take away the temptations and distractions, and make it easier to feel more in control.

4. Tell People What You're Up To

If you're making a big life change, or setting off after a major goal, then it might help to let some people know as a way to stay self-disciplined. Telling family and friends what you're up to creates an "external deadline" as you work to deliver what others expect from you, and it can massively boost your drive to succeed, noted Tyrrell. Those of us with strict work deadlines and project end dates know this feeling all too well.

But what if you don't have any external deadlines for your goals? If that's the case, you gotta make some. For example, Tyrrell suggested writing up a contract, such as "I will write 100,000 words in two months," and then signing it in the presence of friends. It might sound silly, but knowing people have expectations helps create a very motivating sense of accountability.

5. Be OK With Feeling Uncomfortable

Another huge ruiner of self-discipline is discomfort. Nobody likes those first painful days of working out, the horrible feeling of writer's block, or the sense that they're being deprived in some way (be it of leisure time, food, sleep, etc.) So it's very normal to panic and back out of change.

It's important to push through those first few crappy days of muscle aches, or writer's block, or sugar cravings, especially since it will get easier. According to Morin, "We can usually stand a lot more discomfort than we think we can. Practice allowing yourself to experience uncomfortable emotions like boredom, frustration, sadness, or loneliness and increase your tolerance to the negative emotions that you may experience as you increase your self-discipline."

6. Imagine Your Life Once You've Met Your Goals

If you feel like giving up on something, take a second and imagine your life after your goals are met. Are you basking in accomplishment? Do you feel super healthy? Are you rolling in extra cash? According to Erin Cox on HuffingtonPost.com, "The more clear you are about the way you’ll feel when you achieve whatever goal you’ve set for yourself, the more likely you are to hunker down and do whatever it takes to achieve it." Picture it all in detail, and let that be your motivation.

7. Don't Give Up If You Make A Mistake

Even with visions and external deadlines, it's still possible to mess up from time to time. I'm talking about slacking off at the gym, temporarily giving up on your poetry, having a cigarette — anything you consider a slip-up that isn't helping you reach your goals.

Don't let it get you down, and don't feel all guilty like you "ruined" something.. As Morin noted "Self-discipline comes easier on some days than others ... Making mistakes is part of the process to becoming better. The way you recover from those mistakes is what’s most important. The key is to acknowledge your mistakes and move on from them with even more resolve to do better next time."

If something is important to you, or it's necessary to make a major life change, then stick to your guns. A little self-discipline is all it takes, so don't give up.