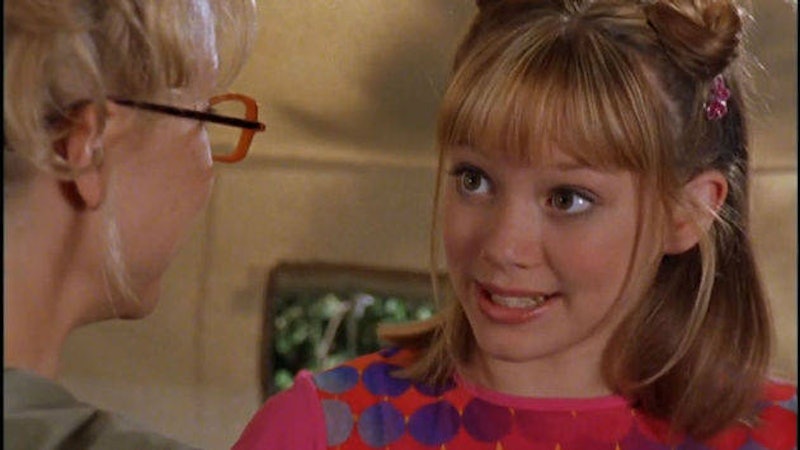 Although I have relaxed a lot in my adulthood, there is no denying that I was the most obnoxious goody two shoes as a kid in the '90s. I was so desperate to impress my teachers that if one of them yelled at the class as a whole I felt so personally wounded that you would think I'd singlehandedly launched more chaos than Helen of Troy. I wanted babysitters to think so well of me that I spent hours before their arrival making ridiculously detailed power point presentations mapping out all of the rules we followed, what each of the kids in the family was like, and the activities we could all do together, all of it color-coded to a terrifying degree. I wore exclusively matching Talbots Kids outfits my mother bought for me, was never late coming in from recess, and was the biggest tattle tale you've ever met. In short, I was a menace to society. Thank god I was so cute.

Of course, in the '90s it didn't matter much because my peers hadn't quite caught on to why I was so insufferable yet. It wasn't until high school that everyone was like "uh, duh, don't invite that girl to any parties ever" that I realized that having an overactive conscience and painful desire to people please would socially backfire like whoa. So while I am glad that I reached adulthood and (mostly) freed myself from those awkward chains, I still look back on the '90s goody two shoe shenanigans with a strange brand of fondness. If you were a goody goody little kid in the '90s, you'll understand these feelings allllll too well.

Throwing Your Siblings Under The Bus On Report Card Day

You: "HERE'S MINE AND ALSO I FISHED HIS OUT OF HIS BACKPACK BY THE WAY I GOT ALL A's CAN I GO TO CHUCK E. CHEESE??"

Everybody else lost interest in theirs after the first few days, but you were determined to prove to your parents, to yourself, to the whole damn world that you were the best Tamagotchi parent to ever walk this earth. The burden of responsibility was almost more than your prepubescent shoulders could bear.

Literal worst fear: accidentally writing on the projector itself instead of the transparency. Deep breaths. Deep breaths. FOCUS, YOU FOOL, THIS HONOR COMES BUT TWICE A YEAR.

You know what I'm talking about: Your green card, your yellow card, your red card. If you had a hippie teacher, your sun card, your rain cloud card, your thunder bolt card. One time I yelled out an answer to a math problem without being called on and had to flip my card in fourth grade, and I still shudder thinking about it. (You BET I cried and made it awkward for everyone.)

Anytime a character did something "bad" you could not handle watching it, as if you, by proxy, were also doing the bad thing. I almost failed a report because I had too much anxiety to keep reading a book where the girl peed into a water gun and went after her nemesis. She was going to get in so much trouble.

The Panic Of Impending “Typing Tests”

There was no nightmare more ripe for a goody two shoes baby in the '90s than an in-class timed typing test. You could study you way through all the other types of panic, but this was the first experience where your panic actively worked against you, and the idea of not being in the top percentile of something was more than your little loser heart could bear.

Learning What The Word “Brown Nose” Meant Before Anyone Else

Brown nose, suck up, teacher's pet. You might have had a first name once, but not anymore!

Crying Over Grades Before Grades Even Counted

Once in second grade I got an "A" (acceptable) instead of an "E" (exceeds expectations) for desk organization, and reacted with the same amount of angst as a grown woman who had lost her job and had 15 children to feed.

For better or for worse, most schools had an "Enrichment" or "Gifted & Talented" program. And you'd be damned if you didn't get to be part of the Elementary Elite. (A decade and a half later we are all clutching to our virtually useless top tier degrees and lol'ing sad tears.)

Eventually your quiet ranks would rise, elevated from the modest LiveJournal to the mighty Tumblr. The words "fandom" and "OTP" would become regular human speak. All your fave comics and fantasy novels would hit the mainstream. But until then, you had to endure the weirdness of being that girl who dressed up as Gohan from Dragon Ball Z several Halloweens in a row and miserably hid her fan fiction habit by penalty of death.

It's a miracle I survived 1999. The last thing you want to do during sex ed is disappoint your teacher, who reasonably asked you all to listen and "be mature about this," but on the other hand, the word "scrotum" is perhaps the funniest thing you have ever heard.

The Unending Heroine Worship Of One Hermione Granger