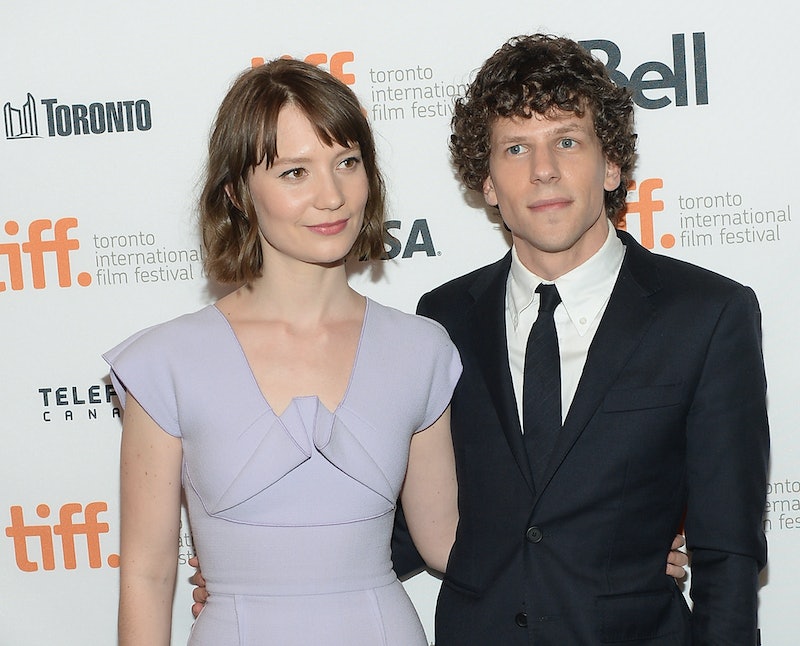 It can definitely feel like there are no secrets in Hollywood, especially when it comes to the dating habits of our favorite celebrities. When two high-profile public figures come together, however briefly, it makes headlines for one obvious reason: juicy gossip about celebrity romances is so fun. While it seems like all celebrity hookups become public knowledge, especially in the age of TMZ and Twitter giving constant, unrelenting updates, there are many celebrities you never knew were dating another celebrity.

In some cases, these low-key couples have been dating or engaged for years, and yet it's easy to forget all about their coupledom because they manage to fly so far under the radar. It's further proof that paparazzi can't quite catch everything that goes on in Hollywood. After all, these couples are totally adorable and apparently super in love, but seem to prefer keeping their love lives private by not frequently sharing couples' selfies or tweeting about their relationship.

Unlike certain couples who are in the news every time they step outside (ahem, Bey and Jay or Kim and Kanye), these pairings seem to appreciate staying out of the spotlight and keeping things on the down low. Really, who could blame them?!

According to a report by People , the two actors have been dating on and off since 2007 (!!) and seem to keep finding their way back to each other — they ignited rumors that they were back on again in early 2016, proving that their love story may not be over just yet.

After meeting on the set of the 2013 thriller The Double , these costars took their love off screen and have been dating quietly since at least 2014. But they're notoriously private about it, refusing to discuss their relationship status in interviews and rarely walking the red carpet together. As of October 2015, Wasikowska and Eisenberg were still together, but it's impossible to know for sure since they're fiercely private about their personal lives. Since there haven't been reports suggesting the two have split, it's likely they're enjoying a low-key life together.

These two are slightly less secretive about their relationship, with Brie confirming reports in 2015 that they were engaged. She gushed to People about Franco: "I have an incredible fiancé. He's so wonderful. He's just the sweetest man I know. And he's so funny and incredible in every way." Though they haven't yet tied the knot, I expect them to do so in a very low-key way. And who knows? It's possible they already did and it slipped by us!

Dano and Kazan are the rare breed of celebrity who do actually open up about their life together, but manage not to overshare, and it's definitely refreshing. They've been together since 2007 and worked together on the 2012 romantic comedy Ruby Sparks. They live together in Brooklyn, according to The New York Times, likely preferring the city life to the glare of Hollywood. Can't say I blame them!

Even though fans of The Notebook felt that McAdams and her ex-boyfriend Ryan Gosling were akin to Canada's royal couple and still aren't over their split, both actors have moved on with other celebrities: Gosling with actor Eva Mendes, and apparently McAdams with her True Detective costar Kitsch. They are rarely spotted together but some reports have the couple "practically living together." When asked point-blank if they were dating during an Entertainment Tonight interview, McAdams wouldn't confirm nor deny the rumors, simply quipping, "It’s funny the things the Internet likes to proclaim." That's fair, keep playing coy, girl. No worries! As for their present-day relationship status, gossip sites reported seeing McAdams in the same neighborhood where Kitsch reportedly has an apartment in March 2016, so even though it's impossible to confirm, it seems likely the two might still have something going on.

There's just no denying it: This pair is one of the cutest (and most stylish!) couples in Hollywood, and they often appear together in support of each other's projects, always looking amazing to boot. According to People, the pair has been together since 2006, but keep things very low-key — you'd be hard-pressed to find a couples 'gram shot on their feeds. A romance of more than 10 years in Hollywood is almost like seeing a unicorn, if that unicorn were dressed in head-to-toe couture.

Foxx and Holmes refuse to even acknowledge if they are, in fact, dating, but that doesn't mean rumors about them aren't running rampant. Though both were spotted wearing wedding rings in March 2016, Foxx's rep insisted the two weren't engaged or married. In fact, they keep things so private, they're hardly ever seen with each other, but yet the rumors still persist. Who knows what's really going on here, but their romance is definitely one that I could get behind. Who else here ships "Foxxholmes?" Or perhaps "Holmesfoxx?"

Despite both having an over-the-top persona and loud personality, it seems the singer and the DJ are keeping their romance sort of quiet. They rarely post photos together on social media, but they're definitely in love. O'Day confirmed that they met while filming the forthcoming reality series Famously Single. She told E! News in February,

Yeah, we met on the show. The show is about all of us coming together, dating, learning through a dating coach how to go out there and approach people that are better suited for us and kind of get over the issues that we were having. And it ended up just like becoming like this chemistry happened within the house with a few of the cast-mates and Pauly and I were one of them. Which everybody always laughs I feel like people think we're completely different but ended up being pretty alike in a lot of ways. We connect in a really interesting way. I mean, it's definitely something you're gonna want to tune in and watch we have a very funny relationship.

As for what she loves about him, O'Day added, "Pauly's wit. He's incredibly funny and smart and very talented." Aw!

Though they've yet to confirm the rumors, multiple reports claim that the Jane the Virgin star has taken up with the House of Lies actor. I'll give them their privacy, but they are really too cute!

Though they played siblings on Parenthood, Krause and Graham found love on set and have been together for close to seven years, the pair isn't looking to take the next step to marriage. In 2014, Graham admitted to Ellen DeGeneres, "We are very happy as we are and I never have a good question for this answer." She said, "I don't know! We are really happy. I feel like close to five years in Hollywood, its like, aren't we married already really? It's good the way it is." Simple as that.

Dennings and Groban are quick to gush about each other, and it's so sweet: Dennings called her musician boyfriend a "genius" and Groban returned the praise, telling People, "She’s just the most remarkable person. She’s so funny and so kind and just what’s not to love? She’s awesome." They both enjoy spending quiet time together in their pajamas, with Groban revealing that they like to "be the most boring people ever," due to their busy schedules. The couple has been dating since 2014.

These pairs are proof that quiet romances in Hollywood do exist, even though it's very easy to forget!

More like this
At 28, Emma Thompson Was Already A Star — But Unhappy In Love, Actually
By Olivia-Anne Cleary
Paapa Essiedu Likes To Keep His Relationship Pretty Private
By Maxine Harrison
Selena Gomez Is Fine Being Single, But She Still Manifested Romance On 'SNL'
By Martha Sorren, Jake Viswanath and Jack Irvin
Khloé Kardashian Is Reportedly Dating A Private Equity Investor She Met Through Kim
By Jordyn Tilchen
Get Even More From Bustle — Sign Up For The Newsletter