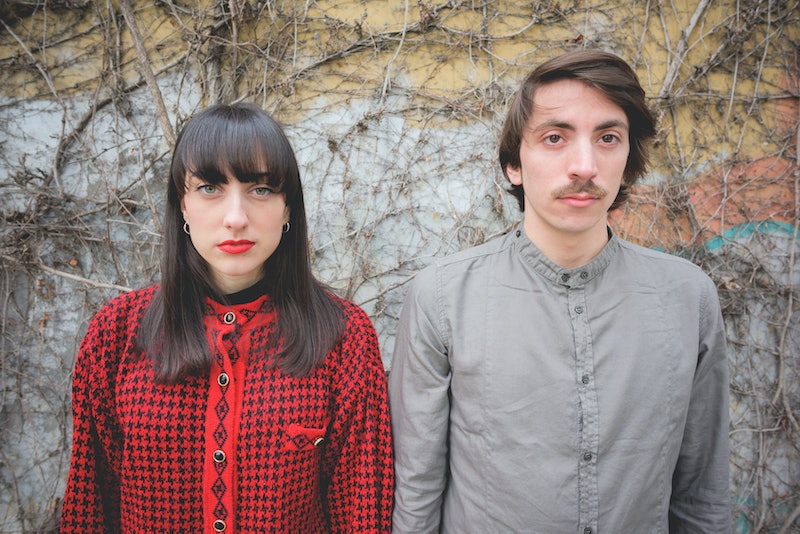 It can be really unnerving when you're in a relationship and you're not sure if your partner is just in a super grumpy mood, or they actually are trying to drop clues that he or she wants to end your relationship. And while the good news is that nine times out of 10, this scenario is just you having an insecure week, or your partner having an extra stressful week, or possibly the two combined, with a sour cherry on top in the form of some sort of recent big fight or other drama — sometimes, when things feel off, they are legit off and it's time to give your relationship some serious attention.

Maybe your partner has been skulking around with a scowl on their face, and you have no idea why. Or maybe they are way quicker to anger lately, or they don't seem to be very present when you're around, or they just seem totally over it and you're not sure why. All of these may seem like hints that they're on their way out, but sometimes the mind can play tricks, and blow small things way out of proportion. So here are 12 signs that your partner is thinking of ending your relationship, courtesy of relationship experts.

1. You Are No Longer A Priority

"When a person stops having the time or desire to be with you, then you know that your relationship is on life support system, and that you might just have to be the one who has the guts to pull the plug," relationship coach and psychic medium Cindi Sansone-Braff, author of Why Good People Can't Leave Bad Relationships , tells Bustle. It feels awful to have someone hanging around now and then who isn't really available and is always looking for an out. "If you keep hearing how he or she is too busy with work, family, friends and other obligations to spend time with you," that sucks, and if they're adding, 'we'll get together soon,' they're just giving you lip service, she says. "Just tell this person that this isn't what you signed on for," she adds.

And be real about why you're peacing out. "Let them know that you'll be moving on, and if you should still be available when their life lightens up, then you might give this thing another try," she says. But whatever you do, don't just sit there. "Keep in mind, that when someone is really into you, they put you on the top of the list, and make time for you," Sansone-Braff says. "Nothing stands in the way: They'd walk five miles through a snowstorm to see you, because that's how much they miss you." If that's just not happening, that's OK — find someone who does feel that way about you.

2. They're A Million Miles Away

They might be sitting next to you, but that's about where the closeness ends. "The most telling clue that the person your with is on the verge of ending your relationship is distance," dating expert Noah Van Hochman tells Bustle. "Not proximity distance, but the emotional kind."

Here's how you can tell, he says: "Phone calls get less frequent and shorter. The types of conversations you engage in are less meaningful and have the feel of an obligation to talk more than an authentic desire. Plans to do things together become more like ‘maybes’ than those things you used to get excited about." Then, before you know it, you don't even know what is going on with your partner. "Distance breeds distance and eventually communication becomes non-existent," he says. Before that happens, break things off.

3. Your Partner Is Talking In Weird Clichés

Some good examples of weird clichés that should signal alarm bells: 'Maybe we’re just not meant to be'; 'Relationships shouldn’t be this much work'; or 'Maybe we’re too different,' relationship coach and therapist Anita Chlipala tells Bustle. Any of these annoying statements should tip you off to the fact that your partner is just saying stuff to see what you'll say, but they're already halfway out the door.

"Ending a relationship doesn’t come easily and it’s normal to have doubts about making the right decision," she says. "Dropping hints opens the door to see the partner’s reaction and lay the groundwork for a breakup." Do them a favor and tell them you know what they're up to. Playing dumb won't help, and it'll make you feel bad about yourself.

4. They're Slowly Pulling Back

Not a full-on ghost. More of some signs of … a paranormal event, or the possibility of one soon. "A clue that someone wants to end the relationship is something that I actually suggest my patients do if they want to end a toxic friendship or casual dating relationship," BetterHelp telehealth counselor and psychologist Nikki Martinez tells Bustle. Obviously this isn't a good idea in a serious LTR, but if you're in something that has just been going on for a couple of months and this starts happening, be aware that this might be what is going on.

"The idea comes from a psychological term called 'successive approximations,'" Martinez says. "By this, I have the person answer calls and texts less frequently, be less and less available, until things just naturally drizzle out." It's not always a good way to go, but it's an OK method if the person might be explosive with directness. If this is going on, call a spade a spade, she says: "If you suddenly realize that you are on the receiving end of this behavior, you might want to start to be honest with yourself that this relationship is on the way out."

5. They Don't Ask About Your Day

Like, ever. A healthy relationship is all about helping each other talk through days both hard and good. "Lack of interest in what is going on with you is a big sign that someone is about to end a relationship," Rob Alex, who created Sexy Challenges and Mission Date Night with his wife, tells Bustle. "If all of the sudden the person you are in a relationship with stops caring about what's going on at your work, or things that you enjoy doing, then a flag might be raised," he says. It's important to just discuss one another's lives, and if that's not happening, it could be a sign.

"Interest in each other is one thing that makes relationships special, and when a person stops taking interest in what you are doing and stops sharing what they are doing, the relationship could be headed south," he says.

6. There's A Persistent Feeling Of Dread

Yeah, that's not a good sign. When you dread spending time with them, that's a gut feeling of something being totally off, Caitlin K. Roberts, founder of To Be a Slut and cofounder of I'd Tap That, tells Bustle. "You are constantly wondering if they are going to break up with you," she says. Well, spare them the trouble and bring it up. When things are in this state, and it seems like your partner is doing things just to spite you, either you're over it, or they are.

"Saturday night comes and goes with no contact," New York–based relationship expert and author April Masini tells Bustle. "Unless you’re living on the moon, Saturday night is date night." Well, to be fair — not everyone goes out on Saturdays, and different things work for different people. But if you're early in a relationship and you don't go out at all over the weekend, then things may be a bit wobbly. Similarly, if you're in an LTR and you haven't been going out much, you might want to look into why that is so. If you haven't heard a peep from your partner all week, see what's up.

So maybe you do go out, but your partner is pulling some weird "limited quality time" stuff on you, life coach Kali Rogers tells Bustle. "If your partner is limiting the time you two spend together alone and only tries to schedule group outings, chances are they are trying to phase the relationship out," she says. "Lack of physical contact and sex is another big indicator." Don't just ignore these signs — talk about it before things get worse.

"If they stop making plans for the future," they might want out, Stefanie Safran, Chicago's "Introductionista" and founder of Stef and the City, tells Bustle. When "they refuse to discuss if they'll come to your cousin's wedding or make plans more than a week or so in advance," that is a definite lack of commitment, and things can only get worse from there. Save yourself some heartache and have a heart-to-heart.

"One clue that they want to break up would be that they are less patient and more prone to argue," relationship coach Chris Armstrong tells Bustle. A couple that are kind to each other and understanding when someone does something weird can sidestep little issues with ease, but the opposite is true when someone wants out. "When Fred and Marie were doing great, a stressful situation or a minor annoyance would lead to them finding their patient side and saying and doing things that kept the relationship moving in a positive direction," he says. "That is because Fred and Marie want to sustain the relationship. If Fred wanted to break up with Marie, he will be short with her, indifferent to resolution, and argumentative." When nothing is riding on it, why bother?

"They’ve stopped communicating and get defensive when you point it out," Danielle Sepulveres, sex educator and author of Losing It: The Semi-Scandalous Story of an Ex-Virgin , tells Bustle. The defensiveness here is key — though plenty of people can be less communicative for a whole host of reasons, if someone is still into the relationship, they'll want to change their behavior when such a thing is pointed out.

"If someone truly didn’t realize that they’re behavior has changed, they would be willing to discuss your concerns without immediately refuting you," Sepulveres says. "Abstaining from having a conversation or dismissing your feelings is not a good sign when you want to address a shift you’ve sensed in the relationship."

Look, there's no way around it. If you're being full-on ghosted, so be it. "One major red flag that a person wants to end a relationship is they begin to ghost you," founder and CEO of matchmaking service Dating Boutique Amanda Rose tells Bustle. "Instead of facing reality or potential conflict head-on, they begin to cut the ties of communication." No. no, no, no, nooooo! "Communication becomes vague or even non-existent," she says. "People who ghost like to avoid difficult conversations and will gradually disappear emotionally and physically." If you can't get a hold of your partner, no matter how hard you try, they are ghosting you. It's not a nice thing to do, and especially awful if you've been dating for a while, but it is a very clear and sure sign that your partner wants to end the relationship.

For more Bustle content, check out our podcast The Bustle Huddle on iTunes.